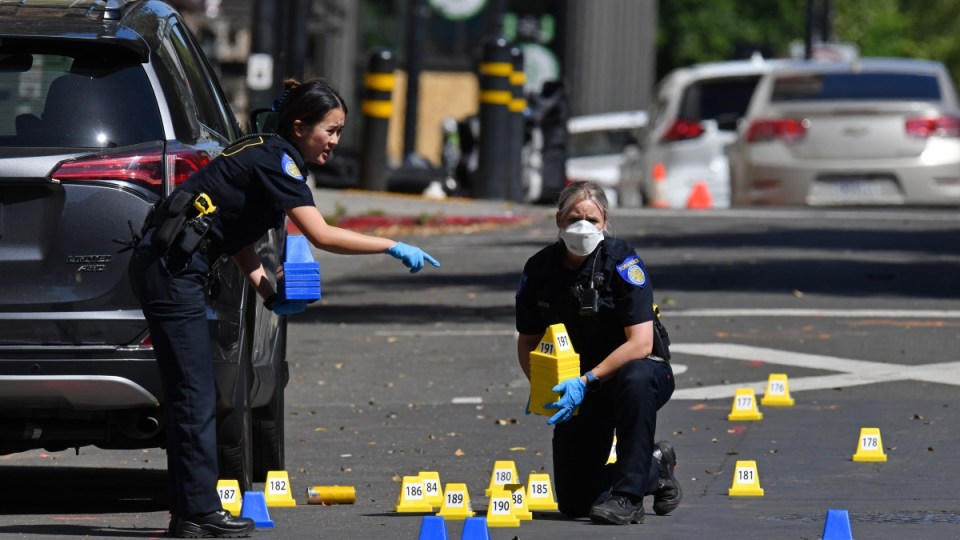 Police Chief Kathy Lester also said on Sunday (local time) that three of the victims who died were women and three were men. All were adults.

The shots were fired early on Sunday morning as people filed out of bars and nightclubs. A video posted to Twitter showed people running through the street amid the sounds of rapid gunfire.

Shots were fired into crowds as bars and nightclubs emptied for the night in the second mass shooting in five weeks in California’s capital city.

The suspects were still at large Sunday afternoon. Authorities said they had recovered at least one firearm and were reviewing video footage posted to social media that showed what appeared to be an altercation before the gunfire erupted.

Police in a statement said it wasn’t yet clear if the fight was related to the shooting.

Kelsey Schar was staying on the fourth floor of Citizen Hotel when she said she heard gunshots and saw flashes in the dark. Ms Schar told The Associated Press she walked to the window and “saw a guy running and just shooting”.

Her friend, Madalyn Woodard, said she saw a crowd in the street scatter amid the gunfire and a girl who appeared to have been shot in the arm lying on the ground. Security guards from a nearby nightclub rushed to help the girl with what looked like napkins to try to staunch the bleeding.

A video posted on Twitter showed people running through the street amid the sounds of rapid gunfire in the city of about 525,000, which is 120 kilometres from San Francisco.

The area where the violence occurred on the outskirts of the city’s main entertainment district is packed with restaurants and bars. Nightclubs close at 2am and it’s normal for streets to be full of people at that hour.

The district is anchored by the Golden One Centre, which attracts big-name concerts and is home to the NBA’s Sacramento Kings. City officials have invested heavily in the area to promote local development.

“This morning our city has a broken heart,” Sacramento Mayor Darrell Steinberg said.

“We don’t know all the facts but we know there were mass casualties in a very short amount of time.”

Sunday’s violence was the third time in the US this year that at least six people have been killed in a mass shooting, according to a database compiled by The Associated Press, USA Today and Northeastern University.

And it was the second mass shooting in Sacramento in the past five weeks.

On February 28, a father killed his three daughters, a chaperone and himself in a church during a weekly supervised visitation.

The Stats Guy: What does tourism in Australia look like now that travellers are returning?
‘No one but us can deliver fuel’: Russia says sanctions threaten International Space Station
Today's Stories