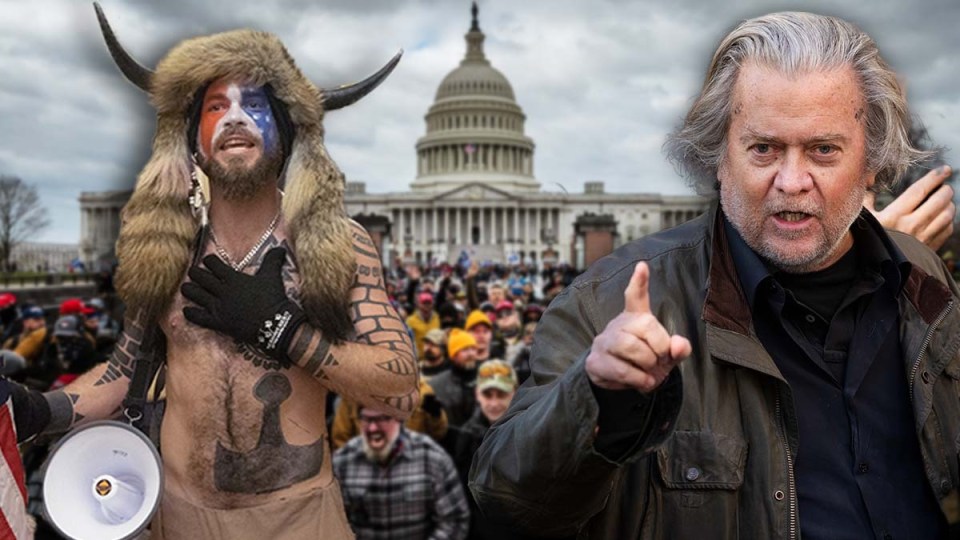 Key figures from the US Capitol attack in January have been charged. Photo: TND

As politicians reckon with the protests outside the Victorian Parliament – in which mock gallows were dragged into the streets – the US is forging ahead with its investigation of the January 6 Capitol Hill riots.

Key figures from the deadly riot are facing legal repercussions, 11 months on from when it erupted after the US presidential election.

They include so-called “QAnon Shaman” Jacob Chansley, whose horned fur headdress made him a viral figure from the riot, and Donald Trump’s one-time chief strategist Steve Bannon.

Chansley was one of more than 600 rioters who have since been charged, and one of 37 who have actually been sentenced.

Much of the recent developments stem from a House committee that was established to look into the events of the day, as well as the organisation behind the scenes.

Its findings may well have relevance to the Australian situation, as the far-right and conspiracy theorists continue to fuel anti-lockdown sentiments around the country.

Far-right researcher Dr Kaz Ross previously told The New Daily that the Melbourne protesters were “at a split”, with some having ideological similarities with their American counterparts.

“Some want to go down the electoral politics side, and some want to storm into Parliament, like January 6 at the Capitol,” Dr Ross said.

Victorian counter-terrorism officers have already charged several individuals for their actions in recent days, including one man who allegedly encouraged people to bring guns to the protest to execute Premier Daniel Andrews.

Over in the US, different players are reacting in different ways.

In September, the House committee subpoenaed former Trump aide and co-founder of right-wing news outlet Breitbart, Steve Bannon, to appear before a deposition looking into how he stoked the flames of the “Stop the Steal” movement.

“Stop the Steal” protesters believe that Mr Trump won the 2020 election, and that Joe Biden and the Democrats “stole” their victory.

When he did not appear, the House of Representatives (all 220 Democrats plus nine Republicans) voted to refer Mr Bannon to the Justice Department.

A grand jury last week indicted Mr Bannon with two counts of contempt of Congress for failing to show up and supply documents.

On Wednesday, filed documents revealed that Mr Bannon would plead not guilty.

“I don’t want anybody to take their eye off the ball,” the far-right political strategist said before entering the court on Monday.

“We’re taking down the Biden regime every day.”

Bannon was released without bond, and is awaiting trial.

He said it would be the “misdemeanour from hell” for Nancy Pelosi and Joe Biden.

The ‘QAnon Shaman’ remains behind bars

Jacob Chansley immediately went viral when he travelled from Arizona to Washington DC to join in the Stop the Steal protests, and proceeded to storm the Capitol building in shamanistic garb and American flag face paint.

Three days later, the 33-year-old conspiracy theorist was arrested and charged with “knowingly entering or remaining in any restricted building or grounds without lawful authority, and with violent entry and disorderly conduct on Capitol grounds”.

In prison, Chansley reportedly refused to eat until he was given organic food.

He was also diagnosed with transient schizophrenia, bipolar disorder, depression and anxiety during this time.

In September, Chansley pleaded guilty to obstructing an official proceeding, and on Wednesday, he was sentenced to 41 months in prison.

“Men of honour admit when they’re wrong,” Chansley said at his sentencing.

“I was wrong for entering the Capitol. I have no excuse, no excuse whatsoever.”

The Daily Beast reports that Chansley cited Jesus Christ, Mahatma Gandhi and The Shawshank Redemption during a 45-minute “rambling” speech to the court.

What’s next for the House committee?

In November, many more senior Trump aides and campaign officials were subpoenaed by the House committee.

Meanwhile, more than 200 people have been interviewed as part of the investigation.

In addition to the 25,000 documents it has already received, the House committee is also seeking hundreds of pages of documents from Mr Trump’s final days in the White House.

These include visitor logs, schedules, call records, and even handwritten memo’s from Mr Trump’s chief of staff at the time.

Mr Trump pushed back by claiming executive privilege, a doctrine that allows presidents to keep their communications confidential.

Mr Bannon has also invoked executive privilege, however he was not working for the president at the time fo the Capitol Hill attack, having reportedly been pushed out of the administration in 2017 for playing down the deadly “Unite the Right” neo-Nazi rally in Charlottesville, Virginia.

The law is catching up with two key figures from the Capitol Hill riot, and there’s more to come