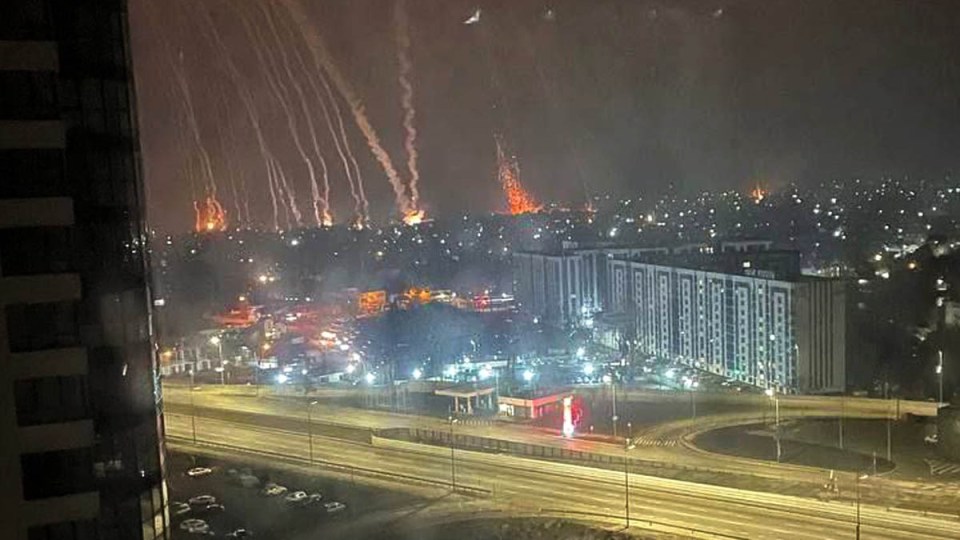 A scene across Kyiv early on Friday morning. Photo: Twitter

There were multiple reports of fresh blasts in the Ukrainian capital, 24 hours after Russia’s first attack, and other unconfirmed reports that Kyiv’s air defence had stopped an air raid by intercepting missiles and downing an enemy aircraft.

A Ukranian interior ministry official said an aircraft had crashed in the Darnytskyi district of Kyiv. A nine-storey residential building was on fire in the neighbourhood shortly afterward.

It came as Ukrainian and US officials said Russia aimed to capture the capital and topple the government. It has already capturing the Chernobyl former nuclear power plant along the shortest route from Belarus, where Moscow has staged troops.

The White House has condemned Russia for “credible reports” that civilian staff at Chernobyl – the site of the world’s worst nuclear power disaster – have been taken hostage.

Earlier, President Volodymyr Zelensky announced a general mobilisation, and banned male citizens between the ages of 18 and 60 from leaving Ukraine.

Mr Zelensky said he and his family would stay in Kyiv as Russian invaders advanced.

“They [Russians] want to destroy Ukraine politically by liquidating the head of state,” he said in a video address late on Thursday (local time).

He also warned that Ukrainian officials had “information that enemy sabotage groups have entered Kyiv”, although he did not elaborate further.

Despite the renewed bombardment, Britain’s Ministry of Defence said it was “unlikely that Russia has achieved its planned day one military objectives”.

“Ukrainian forces have presented fierce resistance across all axes of Russia’s advance,” the MoD said in a statement, adding that the Ukrainian army had reportedly “halted Russia’s advance to Chernihiv”, a city on the way to Kyiv.

“After the fierce battle, our control over the Chernobyl zone was lost. The condition of the former ChNPP facilities, confinement and nuclear waste storage facilities is unknown,” Mr Podolyak said.

“After a completely senseless Russian attack in this direction, it is impossible to say that Chernobyl is safe. This is one of the most serious threats to Europe today.”

Alyona Shevtsova, adviser to the supreme commander of Ukrainian Ground Forces, said on Facebook that Russian forces had taken control of the still-damaged power station and staff members were being “held hostage”.

White House press secretary Jen Psaki said the US was “outraged by credible reports that Russian soldiers are currently holding staff of the Chernobyl facilities hostage”.

“This unlawful and dangerous hostage taking, which could upend the routine civil service efforts required to maintain and protect the nuclear waste facilities, is obviously incredibly alarming and greatly concerning. We condemn it and we request their release,” she said.

Scores of Ukrainians, civilians and service members alike, were killed in the first full day of fighting.

“Russia has embarked on a path of evil, but Ukraine is defending itself and won’t give up its freedom,” Mr Zelensky tweeted.

He said in a video address that 137 “heroes”, including 10 military officers, had been killed and 316 people wounded. The dead included all border guards on the Zmiinyi Island in the Odessa region, which was taken over by Russians.

He concluded an emotional speech by saying that “the fate of the country depends fully on our army, security forces, all of our defenders.”

Ukrainian forces were braced for more attacks after enduring a Russian barrage of land- and sea-based missiles, an assault that one senior US defence official said was aimed at seizing key population centres and “decapitating” Ukraine’s government.

US President Joe Biden announced new sanctions against Russia, saying President Vladimir Putin “chose this war” and had exhibited a “sinister” view of the world in which nations took what they wanted by force. Other nations have taken similar measures.

Mr Zelensky appealed to global leaders, saying that “if you don’t help us now, if you fail to offer a powerful assistance to Ukraine, tomorrow the war will knock on your door”.

British Prime Minister Boris Johnson said he aimed to cut off Russia from Britain’s financial markets as he announced sanctions, freezing the assets of all large Russian banks and planning to bar Russian companies and the Kremlin from raising money on British markets.

“Now we see him for what he is – a bloodstained aggressor who believes in imperial conquest,” Mr Johnson said of Mr Putin.

Mr Zelensky urged the US and West to go further and cut the Russians from the SWIFT system, a key financial network that connects thousands of banks around the world. The White House has been reluctant to immediately cut Russia from SWIFT, worried it could cause enormous economic problems in Europe and elsewhere in the West.

Mr Putin justified his actions in an overnight televised address, asserting the attack was needed to protect civilians in eastern Ukraine – a false claim the US predicted he would make as a pretext for invasion.