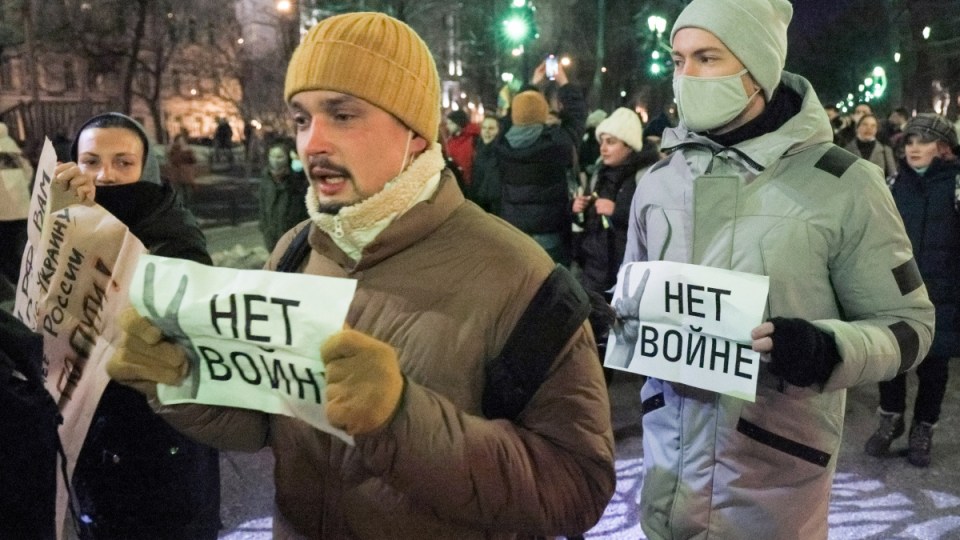 Thousands turned out in Moscow to protest the Russian attacks, leading to mass arrests. Photo: Getty

The new sanctions, which will mirror similar moves from the US and Britain, will apply to 300 members of Russia’s parliament who voted to authorise the military action, as well as Russian oligarchs of “strategic significance”.

Mr Morrison said Australia would work with American authorities to align sanctions against Belarusians who were complicit with Russian acts of aggression.

“Russia has been planning these acts of violence for some considerable period of time, but there must be a cost, there must be a price and it must be imposed by the global community,” Mr Morrison said in Adelaide.

“We understand the concern that the threat of sanctions did not lead to [Russia] not going ahead with this. That was not our expectation.”

“We are a long way from Ukraine, and the most effective way is to be doing that with our NATO partners to ensure we can support that commitment,” Mr Morrison said.

“We are providing financial support as well as equipment through that NATO channel.”

Mr Morrison also singled out China for failing to call out the Russian invasion of Ukraine and impose sanctions. He said it was concerning that China was easing trade restrictions with Russia at a time when most nations were imposing sanctions.

“That is simply unacceptable … and I would urge all nations to decide this is not a time to be easing trade restrictions with Russia,” he said.

“This is of great concern to Australia that these acts are not being called out with the same voice when it comes to those in our region.”

“There are no alternatives to sanctions, the alternative is no penalties and no costs and that is unacceptable,” she told Sky News.

“[Russian President Vladimir Putin] clearly wants to reverse history and force Ukraine back under authoritarian control, but Ukraine has chosen a different path and a path of democracy.”

“China is doing the exact opposite [of sanctions] by lifting restrictions on wheat trade, it is doing the opposite of what it should be doing,” Mr Albanese said in Tasmania.

Mr Albanese said it was critical for all countries to condemn Russia for its act of aggression in Ukraine.

“[Mr Putin] believes that Ukraine’s territory should be part of Russia and that’s his intent. He’s 69 years of age and he wants to see it in his lifetime,” he told the Nine Network.

“We should be very careful about autocrats like this who have this worldview that they want to go back to a Cold War era or back to a period of conflict and that’s a price that they’re willing to pay.”

But Mr Dutton said Russia was likely to continue to focus on Ukraine, with any push into Poland invoking a response from the US-backed NATO security alliance.