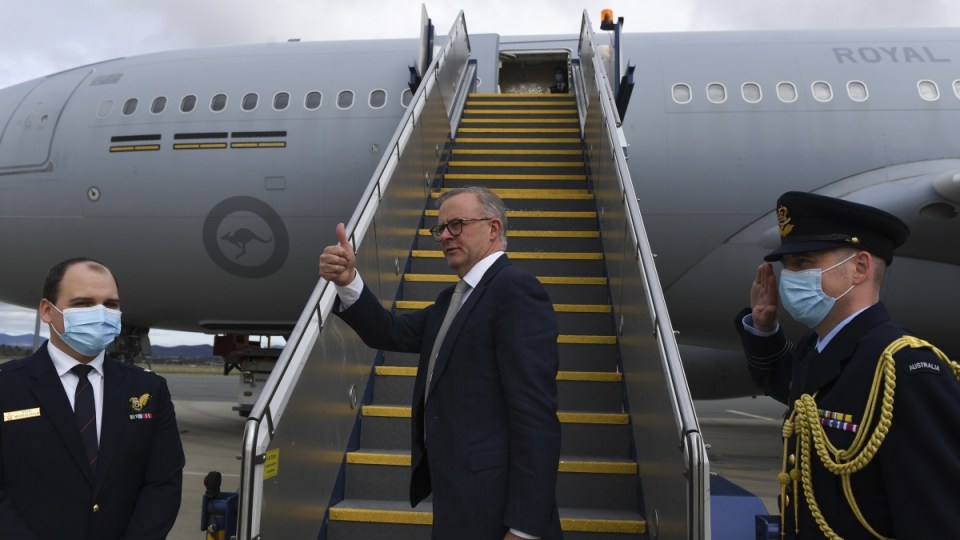 Prime Minister Anthony Albanese will stress Australia’s reengagement with Pacific Island nations when he lands in Fiji for a key meeting of regional leaders.

Mr Albanese left Australia early on Wednesday for Suva, Fiji, for the Pacific Islands Forum, where US Vice President Kamala Harris was due to announce new investments and the opening of two embassies.

“My message will be that Australia is back, reengaged with the Pacific,” he told ABC radio before departing Sydney.

“It’s a new era, a new era of cooperation and one of my messages will be that [our] support for the Pacific doesn’t come with strings attached.”

The forum has already attracted controversy after Kiribati’s shock decision to withdraw from the regional body prior to the gathering.

Asked about Kiribati’s withdrawal, Mr Albanese it was a complicated issue.

“It’s around the status of Micronesia nations as part of the … forum,” he said.

“Prime Minister Bainimarama put together a super agreement to try to make sure that the … nations of the Pacific Island Forum held together and in a constructive way.

“That was successful, largely, in removing some of the discontent that had been there and the tensions that were there.”

But he conceded it was not been successful in keeping Kiribati, which was angered after missing out on the forum secretary-general position, engaged.

“But we will continue to reach out and continue to engage and I’m very hopeful that we can bring Kiribati back on board,” Mr Albanese said.

Other member states will miss the summit, including Nauru, due to a COVID-19 outbreak, Cook Islands, which is holding local elections within weeks, and Marshall Islands, due to legal issues.

The four absences – almost a quarter of the forum – are unfortunate given the emphasis forum leaders have placed on regional unity ahead of the 2022 summit.

The forum has been mired in internal squabbling, with sub-regions and individuals competing for influence in a long-running spat that led to Kiribati’s withdrawal.

In the background are China and the US, which are battling for influence in the increasingly important region.

On that front, the US has claimed a diplomatic victory with Ms Harris to virtually address members on Wednesday morning.

The invitation to the US to speak at the forum is a major breach of tradition, given that non-forum states are usually restricted to post-forum dialogues.

Asked if this was snub to China, Mr Albanese it was the forum’s decision, adding that the US has had a long-term presence in the Pacific, including the Hawaiian Island.

Ms Harris will announce new embassies in Kiribati and Tonga, a renegotiated South Pacific Tuna Treaty and a national Pacific strategy when she speaks on Wednesday.

Mr Albanese’s later arrival is not likely to be seen as a snub, given he has committed to the full-day leaders’ retreat on Thursday.

“Australia’s partnership with the Pacific is longstanding. The Pacific Islands Forum is the heart of Pacific regionalism – and Australia is a proud founding member,” he said on Tuesday.

“A strong, united Pacific Islands Forum is vital to protecting our shared interests in a peaceful, prosperous and resilient region and to addressing the pressing challenges our region faces.”