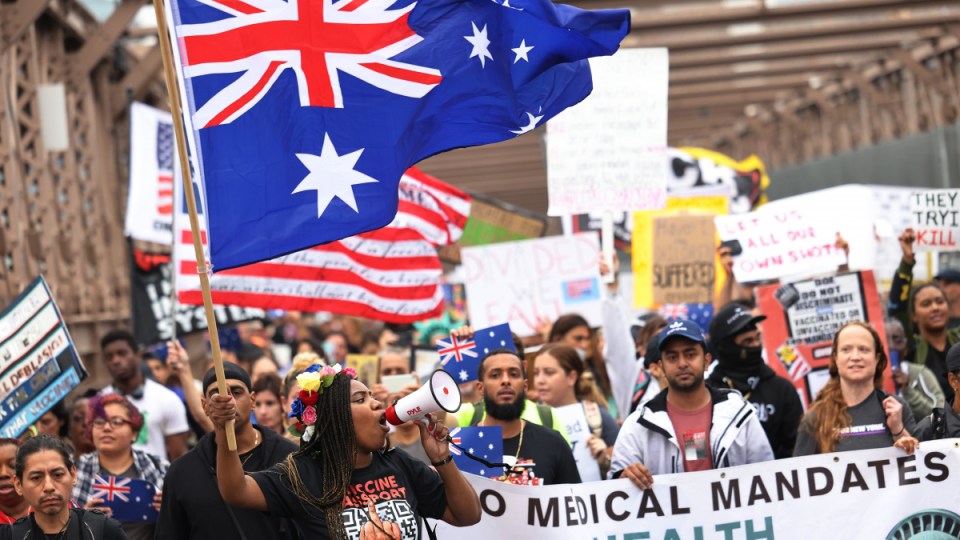 Australian lockdowns and vaccine mandates have become the unexpected target of protests in New York City.

Hundreds of Americans gathered outside the Australian consulate in New York on Monday (local time) to protest against Australia’s COVID public health measures.

Protestors chanted “save Australia” and held placards that read “what is happening in Melbourne?” and “Australia is the example of the new world order”.

A man with a megaphone told the crowd “What’s going on in Australia is not just going to be Australia. And when it shows up on our doorsteps, we’re gonna punch it right in the f—ing teeth”.

Meanwhile, others in the crowd booed clinic staff and chanted “shame on you”.

The protestors walked from the Brooklyn Department of Education, across the iconic Brooklyn Bridge, and into Manhattan toward the Australian consulate.

Attention in the US has been firmly on Australia in recent weeks after images of violent clashes in Melbourne between protesters and police went global.

Some Republicans even called for the US to impose economic sanctions against Australia for “human rights abuses” against protestors.

While in the US last week, Prime Minister Scott Morrison was asked whether Australia had become “an authoritarian dystopia“.

“Of course not. Australia is a country that has seen over 30,000 lives saved, through COVID successfully,” he said.

“We’ve worked together to produce these outcomes for the benefit of Australians.”

More than 700,000 Americans have died from COVID since the pandemic began, compared to a little over 1,300 Australians.

Last month Florida had more deaths in one week than Australia has had in eighteen months, despite having similar population sizes.

It’s understood most of the protesters in New York were members of the Department of Education who had been sent on leave because they have refused to get vaccinated against COVID.

As in many Australian states, New York teachers have been ordered to receive at least one dose of a COVID vaccine, in their case by Monday.

Reportedly 97 per cent of DoE staff had been jabbed. That left about 4000 staff unvaccinated and without a job on Monday.

It comes as an Australian teacher has challenged vaccine mandates in Victoria’s Supreme Court, claiming they are discriminatory and breach human rights.