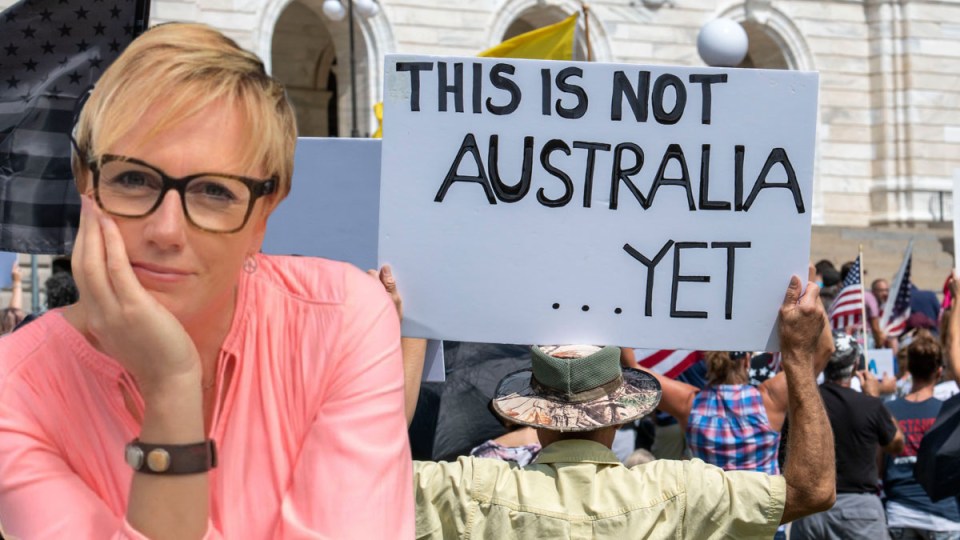 Some Americans are more outraged by Australia's lockdowns than Australians. Photo: TND/Getty

If you needed any more proof that COVID has turned the world on its head – Americans now think Australians are crazy.

Travelling in the US last week, Prime Minister Scott Morrison was asked by Sydney’s Daily Telegraph if Australia is an “authoritarian dystopia”, off the back of protests in Melbourne and the use of police and the military to enforce lockdowns.

“Of course not,” the PM replies. “Australia is a country that has seen over 30,000 lives saved, through COVID successfully.

“We’ve worked together to produce these outcomes for the benefit of Australians,” he added.

The question was designed to be inflammatory, obviously.

But while many Australians have seen uniformed officers enforcing COVID restrictions as an overreach, especially in poor and culturally diverse communities, some Americans are more outraged than we are.

Just as Australians don’t understand the American psyche when it comes to things like gun rights, many freedom loving Americans just do not get why most Australians have tolerated such harsh limits on their liberty during the pandemic.

That’s despite the huge disparity in infection and death rates between the two countries.

Florida Governor Ron DeSantis has harnessed this disbelief, using Australia as a point of contrast to his own live-and-let-live (or die) approach to COVID.

He has posited that the approaches are so polarised that a continued relationship between the US and Australia should be questioned.

“In fact, I wonder why we would still have the same diplomatic relations when they’re doing that.

“Is Australia freer than communist China right now? I don’t know. The fact that that’s even a question tells you something has gone dramatically off the rails with some of this stuff.”

Scott Morrison told US broadcaster CBS that “cultural differences” had driven the varying approaches to the pandemic.

As one American associate put it recently, in general, while Americans put freedom first, Australians believe in fairness.

The spike in virus cases in Melbourne due to allegedly illicit AFL grand final parties shows that the longer this goes on, the more individualism emerges. However, until now the Australian approach to the pandemic has been largely underpinned by the common good.

There’s deep frustration over lockdowns and the inability to go in and out of the country, but polling shows that Australians remain broadly supportive of restrictions and worry more about mass hospitalisations while ‘living with COVID’.

Some Americans would brand those principles of collectivism as socialism, or even communism as DeSantis alludes. He’s coming from the perspective of a country with entrenched state and individual rights, a minimal welfare safety net and a deep aversion to things like publicly funded healthcare and education.

Florida is one of the most populous US states, with almost as many people as the whole of Australia. The governor dropped most COVID restrictions months ago, rejecting mask mandates and vaccine passports.

Florida consequently saw cases peak at more than 40,000 in a day during the northern summer. The rate of infection has since dropped to less than 6000 per day, apparently due to increasing immunity because so many people have had the virus. Still, Florida is the latest state to exceed one COVID death for every 400 residents.

While fewer than 1300 Australians have died from COVID, more than 54,000 Floridians have succumbed. Yet Ron DeSantis remains the front-runner for the 2024 Republican presidential nomination (unless Donald Trump returns).

What’s happened in Florida is too much for even many Americans to contemplate, but mystification about what’s happening here is not confined to right-wing presidential wannabes.

“Has COVID cost Australia its love for freedom?” asked the New York Times in a recent article.

“To some American conservatives, Australia has even become the world’s largest prison, its citizens all but barred from leaving or returning to the country, with governments reflexively locking people in their homes at any sign of the virus,” the Times wrote

The views reported were in a reference to the conservative online magazine The Federalist, which wrote that the “once free and open Australian continent has effectively become a giant prison for its 26 million residents”.

My own American friends continue to be curious about our circumstances in perennially locked down Melbourne, one remarking, “that just wouldn’t fly here”.

However, a meme posted on Facebook by a Texas conservative group backfired. It captioned a map ‘World’s Largest Prison’ and urged people to “Pray for Australia,” remarking “It’s almost unbelievable what’s happening there”.

Just in case you needed any more proof that Australia and America are very different.

Zoe Daniel: We live in a time when Americans think it’s Australians who are the crazy ones