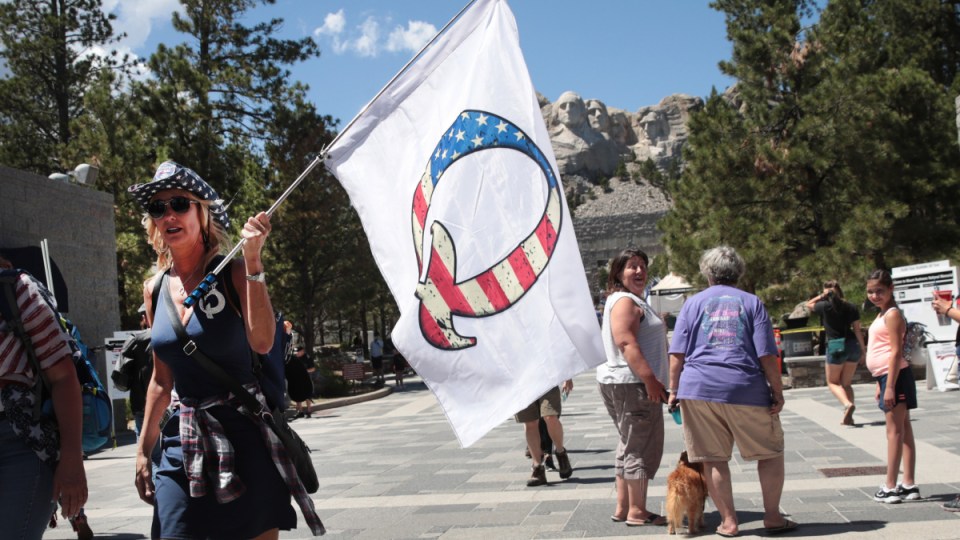 Democrats dismissed it as a fringe group of conspiracy-minded zealots.

Moderate Republicans fretted over its potential to hurt their party’s image, while more conservative lawmakers carefully sought to harness its grassroots energy.

Sympathetic media outlets covered its rallies, portraying it as an emerging strain of populist politics – a protest movement born of frustration with a corrupt, unaccountable elite.

Then, to everyone’s surprise, its supporters started winning elections.

That is a description of the Tea Party movement, which emerged in 2009 from the right-wing fringes and proceeded to become a major, enduring force in American conservatism.

But it could just as easily be a description of QAnon, the pro-Trump conspiracy theory that has emerged as a possible inheritor to the Tea Party’s mantle as the most potent grassroots force in right-wing politics.

This week, QAnon most likely got its first member of Congress: Marjorie Taylor Greene, R-Ga, who won a primary runoff in a heavily Republican district on Tuesday.

Greene has publicly supported QAnon, appearing on QAnon shows and espousing the movement’s unfounded belief that President Donald Trump is on the verge of breaking up a shadowy cabal of Satan-worshipping pedophiles.

Other QAnon-affiliated candidates have won primaries at the federal and state level, though few in districts as conservative as Greene’s.

QAnon, which draws its beliefs from the cryptic message board posts of an anonymous writer claiming to have access to high-level government intelligence, lacks the leadership structure and the dark-money connections of the early Tea Party.

It also lacks realistic goals or anything resembling a coherent policy agenda. Its followers are internet vigilantes gripped by paranoid and violent revenge fantasies, not lower-my-taxes conservatives or opponents of the Affordable Care Act.

But following Greene’s primary win, some Washington insiders have begun to wonder if QAnon’s potential influence is being similarly underestimated.

They worry that, just as the Tea Party gave cover to a racist “birther” movement that propelled conspiracy theories about President Barack Obama into the Republican mainstream, QAnon’s extreme views – which have led some followers to commit serious crimes – may prove difficult to contain.

”They’re delusional to dismiss it as a powerless fringe,” said Steve Schmidt, a long-time GOP strategist and campaign veteran who has become a Trump critic.

“The Republican Party is becoming the home to an amalgam of conspiracy theorists, fringe players, extremists and white nationalists that is out in the open in a startling way.”

To be clear: QAnon’s ideas are far more extreme than the Tea Party’s ever were.

Tea Party supporters objected to Wall Street bailouts and the growing federal deficit; QAnon adherents believe that Hillary Clinton and George Soros are drinking the blood of innocent children. While Tea Party supporters generally sought to oust their political opponents at the ballot box, QAnon supporters cheer for top Democrats to be either imprisoned at Guantánamo Bay or rounded up and executed.

But there are more parallels than you’d think, especially when it comes to how the political establishments of their times reacted to each group’s rise.

When the Tea Party emerged in early 2009, many commentators mocked the idea that it could ever achieve political power, calling it a “display of hysteria” by “frothing right-wingers”.

Michael Bloomberg, then the mayor of New York, characterised the Tea Party as a passing fad, comparing it to the burst of support for Ross Perot’s 1992 presidential campaign.

Republican Party leaders took it more seriously, but they too seemed to think that they could harness its energy without indulging its more extreme elements.

Then, in January 2010, Scott Brown, a little-known Republican lawmaker from Massachusetts, won a Senate seat in a shocking upset over his Democratic opponent, Martha Coakley, partly because of support from the Tea Party. And it became clear to members of both parties that they had been wrong to underestimate the Tea Party’s potential.

Today, pundits tend to portray QAnon as an extreme but marginal movement – a kind of John Birch Society for the 4chan age. And some polling has suggested that the movement remains broadly unpopular.

But QAnon followers have left the dark corners of the internet and established a large and growing presence on mainstream social media platforms.

Twitter recently announced it was removing or limiting the visibility of more than 150,000 QAnon-related accounts, and NBC News reported this week that a Facebook internal investigation into QAnon’s presence on its platform found thousands of active QAnon groups and pages, with millions of followers among them.

Even after Greene’s primary victory this week, few lawmakers have acknowledged QAnon directly. (One Republican lawmaker, Rep. Adam Kinzinger of Illinois, called it “a fabrication” that has “no place in Congress” on Wednesday.)

But its followers have routinely used social media to push extreme views – including opposition to mask-wearing, false fears about child exploitation, and the “Spygate” conspiracy theory – into conservative media. At least one Fox News commentator has spoken approvingly of the movement. And dozens of QAnon candidates are running as anti-establishment outsiders in Republican primaries this year, just as Tea Party candidates did in the 2010 midterm elections.

The similarities between QAnon and the Tea Party aren’t just historical.

Some of the same activists are involved in both movements, and organisations like the Tea Party Patriots have provided fodder for QAnon’s social media campaigns, such as a recent viral video of doctors making false claims about COVID-19.

One notable difference is that while the Tea Party gained influence during a period when Republicans were out of power, QAnon is growing during the Trump administration, with the president’s tacit blessing.

On Wednesday, Trump congratulated Greene on her primary win, calling her a “future Republican star.” (He made no mention of the video in which she called Trump’s presidency a “once-in-a-lifetime opportunity to take this global cabal of Satan-worshipping pedophiles out”.)

Vanessa Williamson, a senior fellow at the Brookings Institution and co-author of “The Tea Party and the Remaking of Republican Conservatism,” said that QAnon represented, in some ways, an extension of the Tea Party’s skepticism of mainstream authorities.

One advantage QAnon has over earlier insurgent movements is improved technology. John Birch Society members had to resort to pamphleteering and newspaper ads, and the Tea Party – which kicked off with a CNBC anchor’s televised rant – relied heavily on the existing conservative media apparatus to spread its message.

But QAnon is native to the internet, and moves at the speed of social media. Since 2017, QAnon followers have built out an impressive media ecosystem encompassing Facebook groups, YouTube channels and Discord servers. These spaces serve both as sources of news and as virtual water-coolers where followers socialise, trade new theories and memes, and strategise about growing their ranks.

The other big difference, of course, is who’s in the Oval Office. Trump has not directly addressed QAnon, but he has conspicuously avoided denouncing it, and has shared dozens of posts from believers on his social media accounts.

Geoffrey Kabaservice, director of political studies at the Niskanen Centre, a libertarian think tank, said that while QAnon would likely not take over the Republican Party as thoroughly as the Tea Party did in 2010, it could continue growing if top Republicans were unwilling or unable to contain it.

“It won’t naturally be flushed out of the system,” he said. “The Republican Party would have to take active steps to flush it out of the system. And that likely won’t happen under President Donald Trump.”

Bill Kristol, a conservative commentator and critic of Trump, was more sceptical about QAnon’s influence on the Republican Party. He pointed out that there had always been extreme outliers in both parties of Congress whose influence tended to be diluted by more moderate voices over time.

But that was in the pre-Trump era, he admitted. Who knew what QAnon might become, with a presidential stamp of approval?

“Trump’s embrace is what makes this different, and more worrisome,” Kristol said. “If Trump is the president, and he’s embracing this, are we so confident that it’s not the future?”

Think QAnon is on the fringe in the US? So was the Tea Party