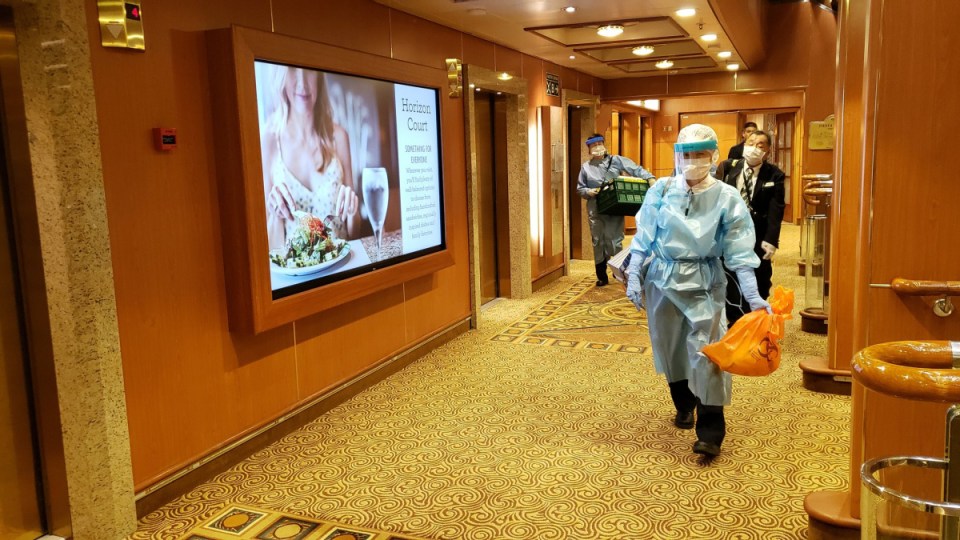 Two Australians are among 10 people aboard a cruise ship quarantined off Japan who have tested positive for the deadly coronavirus.

The pair are among more than 200 Australians aboard the Diamond Princess, which was put into lockdown on Monday night after an ill passenger was confirmed to have the lethal virus.

The scare arose after a passenger infected with the deadly virus flew into Tokyo and spent several days aboard the Carnival ship.

The Diamond Princess ended its planned fortnight cruise early, and is docked off the coast of Yokohama. There are about 3700 passengers and crew on board.

Japanese authorities say the number of positive tests for coronavirus is expected to rise as screening of those on board continues on Wednesday.

Princess Cruises said the ship would remain under quarantine for at least a fortnight, as required by Japan’s Ministry of Health.

Health officials are continuing to test people who have shown symptoms such as fevers or those who have been in close contact with such people. Several passengers had reported feeling ill, officials said.

The health checks began on Monday night after an 80-year-old Hong Kong man who sailed on the vessel last month tested positive for the coronavirus.

Photographs and video posted on Twitter showed masked health workers clad in blue plastic gowns walking down empty corridors on the Diamond Princess, as well as views of deserted lounges and a barren deck.

The new cases bring the total number of confirmed cases to 33 in Japan.

Worldwide, the number of confirmed cases has topped 24,000 and 490 people – mostly Chinese citizens – have died from the virus.

The number of confirmed cases in Australia has risen to 13, among them an eight-year-old boy who is in isolation in a Gold Coast hospital.

He is from Wuhan, the Chinese province at the centre of the global crisis, and was part of a tour group travelling in Australia in late January.

Two others from that group, a man, 44, and a woman, 42, also had the virus and Queensland health authorities had been scrambling to contact other people on their flights in case the infection had spread.

There are now three confirmed cases in Queensland, four in each of NSW and Victoria and two in South Australia.

More than 200 Australians evacuated from Wuhan began their 14-day quarantine on Christmas Island on Monday night. They are likely to be joined within days by 35 more Australian citizens and permanent residents who flew out of China on an Air New Zealand flight on Wednesday morning.

The group of 35 faces a marathon flight from Wuhan to Auckland, where they are not due to land until late afternoon (ADST), and then back across Australia to Christmas Island.

So far, there have been no confirmed cases of coronavirus infection among the men, women and children already on Christmas Island.

The government is negotiating to set up a second evacuation flight from Wuhan and Prime Minister Scott Morrison has warned those Australians still in China there was no guarantee of another.

Also on Wednesday, Mr Morrison thanked Australia’s Chinese community for acting responsibly during the rapidly escalating coronavirus outbreak, despite instances of racist and other “provocations”.

“You are magnificent,” he said on Wednesday when asked for his reaction to taunts endured by some community members.

“The way you have supported each other, the way you have acted in such a responsible fashion [despite] on occasions great provocation, which I’ve found reprehensible.”

Mr Morrison also credited the community with helping the stem the spread of the deadly virus within Australia by self-isolating if required.

“Our tourism industry is already suffering enormous losses because of cancelled bookings,” she said.

“The fishing industry, higher education, farming are all naturally concerned.”

Ms Palaszczuk said she wrote to Mr Morrison seeking disaster relief funding arrangements, used in the aftermath of fires, cyclones and floods, but the request was denied.