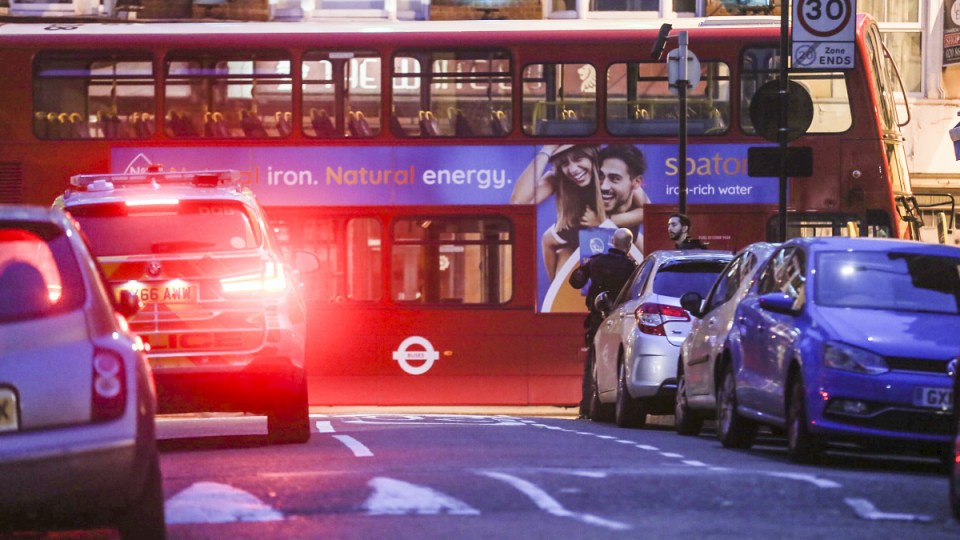 Police emergency services are seen at the site of an incident after a man has been shot dead by police in South London. Photo: Getty

Updated 9.33AM: Police have shot dead a man who strapped a fake bomb to his chest before embarking on a stabbing rampage in a busy south London street.

The attacker, since identified as Sudesh Amman, had recently been released from prison.

It is understood that Amman, who was jailed for possessing and distributing terrorist documents in December 2018, had been freed in the past six weeks.

London’s Metropolitan Police leaders have quickly declared the attack a “terror-related incident”, as they work to identify whether Amman was acting alone.

Reports from the scene suggested three people had been stabbed, one of them in hospital in a life-threatening condition. Authorities have since clarified that one of the victims had actually been injured by glass shattering when police opened fire.

“One man is being treated as life-threatening, one woman has non-life threatening injuries and another woman has minor injuries,” Metropolitan Police’s Deputy Assistant Commissioner Lucy D’Orsi said.

“My thoughts are with the victims and their loved ones at this time.

“The situation has been contained…The incident was quickly declared as a terrorist incident and we believe it to be Islamist-related.

“However as you would expect, officers continue to work in the area to ensure there is no continuing danger to the public and that all evidence is gathered.”

Plain-clothed counter-terrorism officers had had the man under surveillance before Sunday’s attack on the Streatham High Road in Lambeth. It meant they were at the scene within minutes of the stabbing.

“A device was found strapped to the body of the suspect and specialist officers attended,” DAC D’Orsi said.

“Cordons were put in place and it was quickly established that this was a hoax device.”

A 19-year-old student reported seeing a man armed with “a machete and silver canisters on his chest”, fuelling fears he may have had a bomb strapped to his body.

“The man was then shot. I think I heard three gunshots but I can’t quite remember,” Gulled Bulhan told Britain’s Press Association.

Several witnesses at the scene say the attacker wore grey pants, black shoes and what appeared to be something resembling a suicide vest.

It’s believed Amman left the shop and then attacked a female cyclist.

#INCIDENT A man has been shot by armed officers in #Streatham. At this stage it is believed a number of people have been stabbed. The circumstances are being assessed; the incident has been declared as terrorist-related. Please follow @metpoliceuk for updates

Armed officers shot the man who was under an active police surveillance at the time of the incident, the BBC reported.

“I went over and I saw the first victim, a male victim on the ground, near the White Lion Pub, and people were helping him,” the 52-year-old told the PA news agency.

“Then five minutes later a woman came over and said ‘I’ve been stabbed, too, in the back’. And then people starting helping her.

“I saw one body laying down further away. He was face-down between Argos and Iceland. It’s really scary.”

Investigators are researching Amman’s background to learn more about the attack and any possible co-conspirators, Mr Roberts said.

He said if the facts show the stabbings were carried out by a “self-starter”, it meant that any city in the country was vulnerable at any time to a similar sort of low-tech attack.

“Terrorists seek to divide us and to destroy our way of life,” he said.

“Here in London we will never let them succeed.”

The attack came just a little over two months after two people were stabbed on London Bridge by a man who had recently been released from prison, where he was serving a 16-year sentence for plotting a terror attack.

That is the third highest level in a five-step alert system used in the UK and marks the first time the threat level has been so low since August 2014.