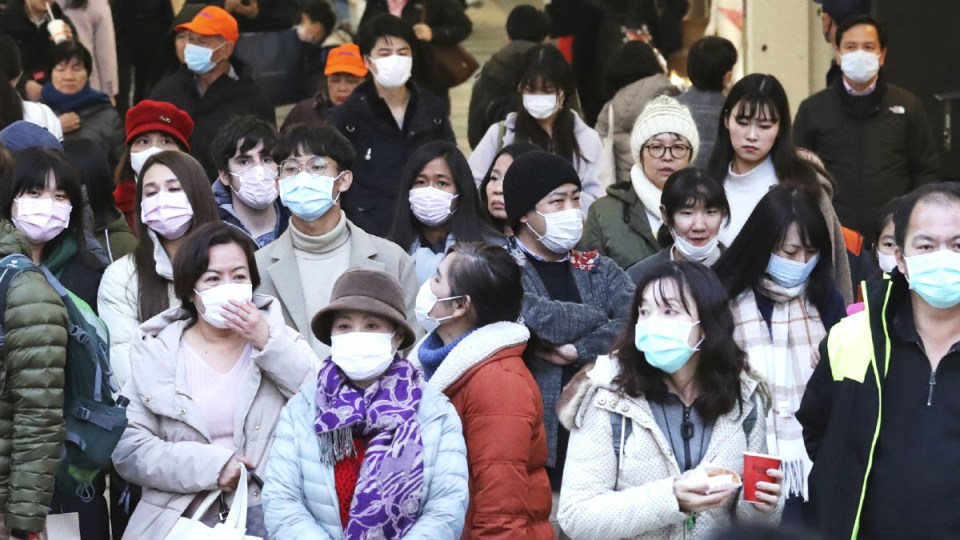 Coronavirus continues to spread around the world, with cases confirmed in at least 20 countries. Photo: AAP

The World Health Organisation (WHO) has on Friday morning declared a coronavirus international emergency over fears of its global spread as China vowed to contain the ‘devil’ virus.

More than 9320 people have been infected worldwide, surpassing the SARS outbreak in 2002-03, and 170 people have died with cases now reported in all mainland Chinese provinces.

There are nine confirmed cases in Australia and 212 confirmed deaths so far in China.

Fresh fears that the deadly illness is sweeping the world came as densely populated India and the Philippines confirmed their first cases and Russia closed its border with China.

The virus has now landed in 18 countries, with cases in Australia climbing to nine after Victoria confirmed its third victim and Queensland declared its second case.

Johns Hopkins University’s Centre for Systems Science and Engineering in the US has produced a dashboard (updated at regular interviews with WHO data)  indicating where confirmed cases are and the spread of the virus in other countries.

An online dashboard built by @JHUSystems is tracking the spread of the #coronavirus outbreak. The dashboard is updated regularly with data from @WHO, @CDCgov, and others to illustrate how the virus is spreading in China and beyond. #nCoV2019https://t.co/JOhpQ0zCH8

WHO director general Tedros Adhanom Ghebreyesus praised China’s handling of the outbreak but said the global spread had prompted the declaration of “a public health emergency of international concern”.

“We don’t know what sort of damage this virus could do if it were to spread in a country with a weaker health system,” he warned.

“We must act now to help countries prepare for that possibility.”

Dr Tedros said the declaration was “not a vote of no confidence in China”.

“On the contrary, WHO continues to have confidence in China’s capacity to control the outbreak,” he said.

“The speed with which China detected the outbreak, isolated the virus, sequenced the genome and shared it with WHO and the world are very impressive.”

The WHO declaration will trigger tighter containment and information-sharing guidelines but at this stage will not include restrictions to international travel and trade.

“There is no reason for measures that unnecessarily interfere with international travel and trade.

“We call on all countries to implement decisions that are evidence-based and consistent.”

Although there are more than 9000 people infected around the world, the death rate has been much lower than SARS which killed 774 people worldwide from about 5300 cases.

Coronavirus has claimed 212 lives, all of them in China where the outbreak originated in an illegal wildlife market, spurring anti-China sentiment and a wave of mask-buying.

Dr Tedros said there were 98 cases of coronavirus outside China, including eight cases of human-to-human transmission in four countries – Germany, Japan, Vietnam and the USA.

The WHO emergency declaration may disappoint Beijing, which had expressed confidence in defeating the “devil” virus, as dubbed by China’s president Xi Jinping.

Authorities are urgently contacting about 170 passengers on Tiger Air flight TT566 from Melbourne to the Gold Coast on Monday over fears they may have contracted the deadly coronavirus.

Two Chinese nationals on the flight – a 42-year-old female and 44-year-old male – were part of a tour group that had come from the Chinese city of Wuhan, the epicentre of the outbreak where 11 million people are in lockdown.

Victoria’s third case, a woman aged in her 40s,  is in a stable condition in isolation at the Royal Melbourne Hospital.

As virus panic grips humanity, a number of countries including Australia are racing to evacuate their citizens from Wuhan and airlines such as British Airways have cancelled some flights to China.

Qantas has been accused of putting profits first by continuing to fly to infected China.

A race against time is also underway to develop a vaccine, with Australia’s CSIRO studying the virus’s behaviour and testing for potential treatments using a virus grown in the lab – the first in the world.

The research will aim to understand if vaccines developed for the virus work and are safe, with studies to be conducted at CSIRO’s high-containment Australian Animal Health Laboratory facility in Geelong.

Doctors are rushing to prepare Christmas Island for coronavirus evacuees currently locked down in Wuhan.

More than 600 Australian citizens have registered for advice or assistance ahead of the planned evacuation to Christmas Island, where the evacuees will be quarantined for 14 days.

Home Affairs Minister Peter Dutton has been forced to defend the heavily criticised plan to send evacuees to the island, where the federal government has held asylum seekers in detention.

“The government is making a decision here to get Australians out of a very difficult position, but our responsibility otherwise is to make sure we keep Australians safe,” he told reporters in Canberra on Thursday.

Some medical specialists have suggested using the Woodside army barracks near Adelaide and another facility just north of Katherine in the NT.

Christmas Island administrator Natasha Griggs said residents had expressed some concerns but had been assured that all necessary measures had been put in place to ensure the safety of locals.

“By and large, the Christmas Island residents understand that this is a humanitarian mission and they’re generally supportive,” she said.

Of the four NSW cases, two men have been discharged from hospital after tests showed they were no longer infectious.

A WHO global emergency declaration could further spook markets, already shuddering at the ripple effects of damage to China’s economy.

Chris Weston, head of research at Melbourne brokerage Pepperstone, said an emergency declaration by the WHO could alarm investors.

“The fear is that they (the WHO) might raise the alarm bells … so people are taking money off the table,” he said.

The 2002-2003 Severe Acute Respiratory Syndrome also came from China, killing about 800 people and costing the global economy an estimated $US33 billion ($49 billion).

Economists fear the impact could be bigger this time as China now accounts for a larger share of the world economy.