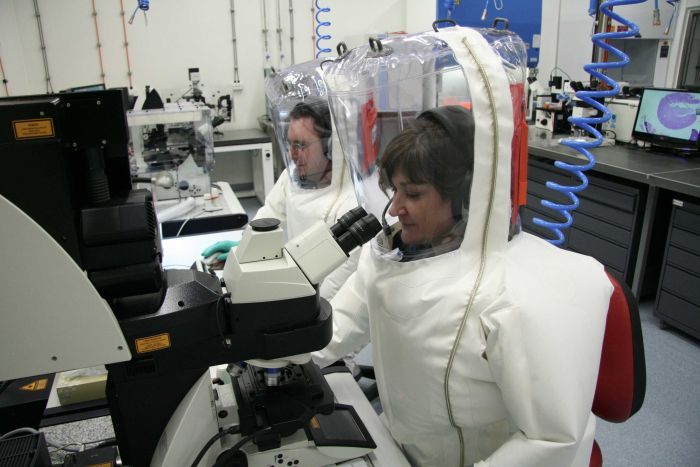 Chinese scientists had shared information about the virus, but it is not the same as working on a copy of the virus. Photo: CSIRO

The coronavirus grown in a Melbourne laboratory has been relocated to the high-security CSIRO animal testing facility in Geelong, where scientists will become the first to test and examine the grown virus to learn more about how it is behaving.

This week, Australian scientists announced they were the first outside of China to grow the virus in a lab.

Now, the virus has been sent to one of Australia’s most-secure scientific labs, the CSIRO’s Australian Animal Health Lab.

It is a “high-containment facility” that houses some of the world’s most deadly viruses such as Ebola, Zika and SARS.

CSIRO scientists will try to understand more about how the new coronavirus behaves and test potential treatments.

Professor Bill Rawlinson from NSW Health Pathology and the University of New South Wales said having the newly grown coronavirus was an enormous step forward for testing anti-viral drugs.

“Currently, there are about 230 potential treatments for the new coronavirus being trialled around the world,” he said.

“By having the live virus, we can test the antivirals in a test tube, which means we can get some idea of which ones might be working against this virus and which ones to take forward into trials.”

Scientists from the University of Queensland are using new technology to develop a vaccine within just four months.

CSIRO director of health and biosecurity Rob Grenfell said if a vaccine could be produced and begin being tested that quickly, it would be a world first.

“With swine flu, I’m aware that some teams actually developed a vaccine in around nine weeks or so after the outbreak, which is fantastic,” he said.

“But it took until the next flu season until there was a vaccine to be used in the general population.”

For bio-security reasons, nobody will discuss how the virus is transported from one facility to the other, but they say the process is very secure.

CSIRO virology expert Trevor Drew said the virus was handled in cabinets where there was no direct contact between the material and the scientists.

“If we have to, we can put on very elaborate suits with their own filtered air supply,” he said.

Dr Grenfell said the Australian Animal Health Laboratory was one of the premier institutes for handling dangerous pathogens.

“The centre at Geelong is one of the few places on Earth that can actually do this type of work,” he said.

“We have been involved over many years in global efforts to deal with such diseases as Ebola, Zika.”

Scientists in China had shared genetic information about the virus so physicians in other countries could diagnose the new coronavirus in patients.

But they had not shared an actual copy of the virus, so the availability of the Australian-grown version means scientists are now able to test possible vaccines.