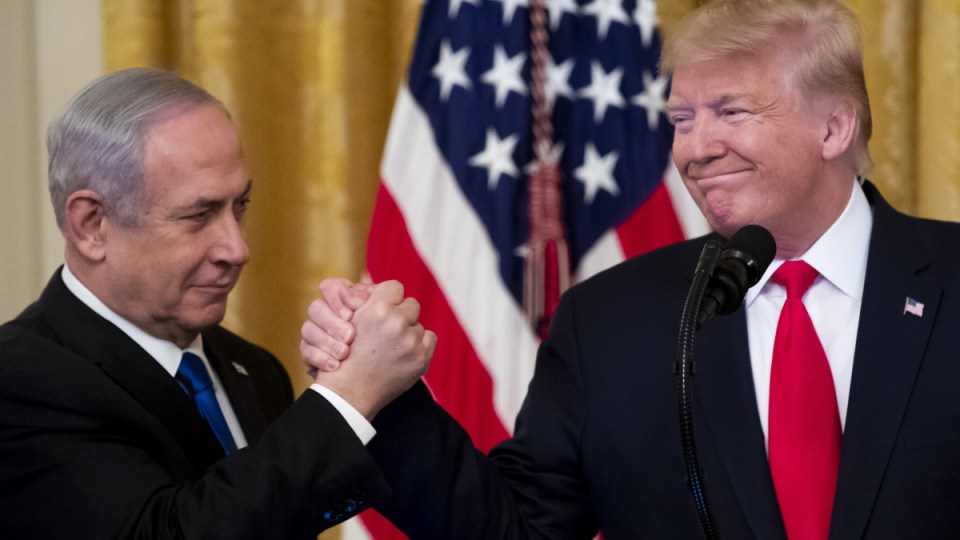 Donald Trump has unveiled details of an ambitious and long-awaited peace plan that aims to resolve the ongoing struggle between Israel and Palestine.

In what he called a realistic “win-win”, the US president proposed creating two states by doubling the amount of Palestinian land while ensuring Jerusalem “will remain Israel’s undivided capital”.

Israeli PM Benjamin Netanyahu stood beside him, lauding his US counterpart and calling the deal a chance to charter a “brilliant future” for all sides.

It came just hours after Mr Netanyahu was indicted on charges of fraud and bribery for allegedly offering political favours in return for positive press coverage and helping wealthy business contacts in return for gifts.

Critics have pointed out the announcement of the plan, the details of which were sorted months ago, is a convenient distraction for the embattled Israeli PM – and for Mr Trump, who this week would otherwise be more likely the focus of impeachment trial headlines.

Palestinian leaders did not join the unveiling and have called for a day of “rage”.

As protesters burnt photographs of the US and Israeli leaders, Palestinian president Mahmoud Abbas said from the West Bank: “After the nonsense that we heard today, we say a thousand no’s to the deal of the century”.

He said the Palestinians remain committed to ending the Israeli occupation and establishing a state with its capital in east Jerusalem.

“We will not kneel and we will not surrender,” Mr Abbas said, adding that the Palestinians would resist the plan through “peaceful, popular means”.

Mr Trump had warned his deal could be the “last opportunity” for Palestinians to achieve an independent state of their own.

For decades, dozens of world leaders have tried to fix the complicated Israeli-Palestinian conflict but so far none have succeeded.

Finding a solution to the conflict really depends on who you ask – it is one of the most controversial political disputes in the world.

But while the issue is complex, in some ways it is very simple: Israeli Jews and Palestinian Arabs both want the same land.

And neither group is willing to compromise enough to make a deal.

To this day, tensions remain high in the region, with Israeli and Palestinian civilians bearing the brunt of tit-for-tat violence from either side.

Tens of thousands of Palestinians have been driven from their homes, with many arrested, tortured and forced to undergo unfair trials at the hands of Israeli forces.

In what has been dubbed the ‘Deal of the Century’, Mr Trump’s adviser and son-in-law Jared Kushner has developed a 50-page plan seeking to address the major issues facing Israel and Palestine in an attempt to settle the dispute once and for all.

On Monday, Mr Trump shared his secret plan with Mr Netanyahu and Opposition Leader Benny Gantz during private meetings at the White House.

Both leaders said they supported the plan.

No Palestinians attended the meetings.

The plan works in Israel’s favour

Mr Trump’s plan unveiled at the White House on Wednesday morning (Australian time) more than doubles the territory currently under Palestinian control, although it also recognises Israeli sovereignty over major settlement blocs in the West Bank.

Palestinians have accused Mr Trump of being biased in favour of Israel as he has adopted policies that bolster Israel at their expense.

Mr Trump said the proposal would allow Palestinians to “achieve an independent state of their very own”, but he he gave few details.

The plan does call for a four-year freeze in new Israeli settlement construction. Mr Trump said Palestinians could use the time to “achieve the criteria for statehood”.

Sources quoted in The Washington Post this week said independence would only be granted if the Palestinian leadership took a new political direction, stopped using violence and showed signs it would negotiate with Israel.

It was not immediately clear if the freeze could be extended if a final deal is not brokered in the four years.

“If they do this, it will work,” Mr Trump said, calling on Palestinian leaders “to rise up and meet the challenges of statehood.”

“Palestinians are in poverty and violence, exploited by those seeking to use them as pawns to advance terrorism and extremism. They deserve a far better life.”

The plan foresees East Jerusalem as a Palestinian capital and Mr Trump flagged that the US would eventually open an embassy there.

He vowed that no Palestinians would be uprooted under the plan, saying he has done “a lot” for Israel and must be fair to Palestinians as well.

“It is only reasonable I have to do lot for the Palestinians … otherwise it wouldn’t be fair,” he said.

The 50-page political outline builds on a 30-page economic plan for the West Bank and Gaza that was unveiled last June and which the Palestinians have also rejected.

Under the terms of the “peace vision”, the future Palestinian state would consist of the West Bank and Gaza, connected by a combination of above-ground roads and tunnels.

Israel captured the West Bank in the 1967 Mideast war, and the Jordan Valley in particular is considered a vital security asset.

Why do we need a peace plan in the first place?

The bloody conflicts over the land of Israel dates all the way back to Biblical times and is one of the world’s longest-running political disputes.

While this most recent sectarian conflict only flared up in the 20th century, tensions have existed between Jews and Arabs for centuries.

One of the reasons is because Judaism and Islam consider the city of Jerusalem sacred.

The ancient city houses a number of important holy sites, such as the Al-Aqsa Mosque, the Western Wall of the ancient Jewish temple, the Dome of the Rock and many more.

Since 1948, when Britain gave up control of Palestine and Israel was created as an independent state for Jews persecuted before and during the Holocaust, violence in the hotly contested region has been ongoing.

The big question of the Israeli-Palestinian conflict is over who gets what land and how it’s controlled.

Will the peace plan work?

That’s according to Anas Iqtait, a Palestinian research scholar at the Australian National University’s Centre for Arabic and Islamic Studies.

Speaking to The New Daily from Palestine, Mr Iqtait said: “There is – to be as frank as possible – zero per cent chance the Palestinians will accept this deal”.

“In reality, not a single Palestinian public figure can accept what has been put on the table,” he said.

“It simply does not meet the absolute minimum of what Palestinians want.”

Most Palestinians recognise Israel as a state, so rather than abolishing Israel altogether, they want the West Bank, Gaza Strip and East Jerusalem to officially become the new Palestine, with East Jerusalem as its capital.

They also want fair treatment of the millions of Palestinian refugees who fled their homeland as a result of the conflict.

“Anything that does not deliver this outcome, or some sort of outcome that resembles this, will not be accepted by the Palestinians,” Mr Iqtait said.

During Monday’s press conference at the White House, Mr Trump refused to answer questions about whether he spoke to the Palestinians about the peace deal.

“It’s something (the Palestinians) should want – they probably won’t want it initially but I think in the end, they will,” he told reporters instead.

“It’s very good to them. In fact, it’s overly good to them, so we’ll see what happens … We think there’s a very good chance that they’re going to want this.”

Dr Eyal Mayroz, a peace and conflict studies lecturer at the University of Sydney, said the Palestinians were even less willing to co-operate with Mr Trump following the president’s controversial decision to move the US embassy to Jerusalem in 2018.

“The Palestinians realise that (Mr Trump) is well on the side of the Israelis,” Dr Mayroz, who was born and raised in Israel, told The New Daily.

“Trump is the most pro-Israeli president ever, because his base is made up of the evangelists, the conservative wing, and they are so pro-Israel that he is very much indebted to them.”

He agreed with Mr Iqtait’s predictions about the Palestinians’ response to the deal.

“The Palestinians will, without a shred of doubt, immediately reject the plan,” Dr Mayroz said.

“The maximum that Israel is willing to give is well below the minimum of what the Palestinians are willing to take.”