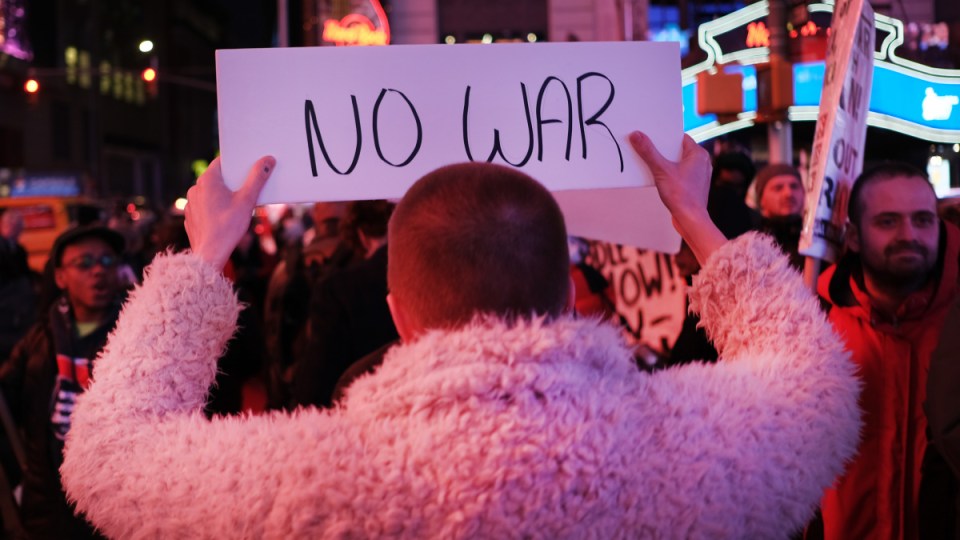 The immediate threat of a US-led war in the Middle East seems to have passed, but it's not over yet. Photo: Getty

The threat of a war between the United States and Iran may have briefly cooled, but the danger is far from over and the stakes could soon be higher than ever before.

If US speculation that Tehran has plans to build an atomic bomb is correct, the world could be contending with a nuclear-armed Iran in just months.

Among a raft of bombastic pledges made in the lead-up to the 2020 election, US President Donald Trump has vowed to retaliate hard if Iran decides to grow its weapons stockpile.

His threat comes as Iran on Saturday admitted to “unintentionally” shooting down a Ukrainian jetliner and killing all 176 passengers and crew.

After a tense week of escalating violence in the Middle East, Iran has now stopped playing by the rules outlined in its 2015 nuclear deal with world powers.

Its unofficial withdrawal from the hard-won deal follows Wednesday’s ballistic missile attacks on US airbases in retaliation for the killing of its top commander by a US drone strike last week.

Under the agreement, Iran was forced to abide by tight restrictions designed to limit its ability to build nuclear weapons.

In return, major countries like France, China, the US and Australia promised to lift tough economic sanctions against Iran’s trade, energy and banking.

Now, by ignoring parts of the agreement, the Islamic Republic is free to speed up its enrichment of uranium and build more advanced centrifuges to enable it to build nuclear weapons.

This is exactly what the deal – championed by Barack Obama and formally abandoned by Mr Trump in 2018, and now informally by Iran – aimed to avoid.

Mr Trump was quick to address this renewed threat as he made a public address on Thursday.

“As long as I am president of the United States, Iran will never be allowed to have a nuclear weapon,” he pronounced.

But Tilman Ruff, co-founder of the International Campaign to Abolish Nuclear Weapons (ICAN), said Iran already possessed most of the materials and equipment required to build an atomic bomb.

“It’s certainly feasible for Iran to have nuclear weapons within no more than a year,” Mr Ruff told The New Daily.

“I’m sure there are forces in Iran, strengthened by this escalation, that would want to build nuclear weapons.”

Tit-for-tat rhetoric between the US and Iran that escalated into violence in the past week was so alarming it triggered fears of another war in the Middle East.

The general’s funeral was attended by hundreds of thousands of wailing Iranians and cost the lives of dozens during a stampede on the crowded streets.

In response to the assassination, Iran fired dozens of ballistic missiles at two US airbases stationed in Iraq. There were no reports of US casualties.

Mr Ruff said Mr Trump’s decision to order the killing of General Soleimani, on top of his withdrawal from the 2015 nuclear deal, meant there was little hope the landmark nuclear agreement would survive for much longer.

He added the breakdown would also likely wreck any chances of striking a similar deal with North Korea.

“It has signalled that the US is a completely unreliable negotiating partner,” Mr Ruff said.

But even if the Iranians did possess nuclear weapons later this year, it is very unlikely they would actually use them.

Ian Parmeter, a Middle East specialist at Australian National University’s Centre for Arab and Islamic Studies, said Iran understood it was no match for the US military.

“If they launch a direct strike on the Americans, Trump will hit them very hard,” Mr Parmeter, a former ambassador to Lebanon and counsellor at Australia’s embassy in Moscow, told The New Daily.

In an election year, facing impeachment, you can assume he will use foreign policy for domestic purposes.”

Mr Parmeter said the fact that no Americans were killed or wounded in Iran’s ballistic missile attacks on Iraqi airbases was probably no accident.

“They [Iran] deliberately pulled their punch and sent about a dozen missiles, but none did any real damage,” he said.

“Some even fell short of their real target and with missiles like that, it doesn’t happen by accident.”

The Iranian public, however, was told a different story.

Tehran announced the missiles killed 80 “American terrorists”, and that this was a proportionate response to the killing of General Soleimani.

“I think [Iran] played a poor hand as well as they could,” Mr Parmeter said.

“They know they can’t match the Americans’ militarily, so they’ve essentially satisfied the popular demand in Iran for revenge by claiming a lot more than they’ve achieved, but at the same time they didn’t do so much to provoke a US response.”