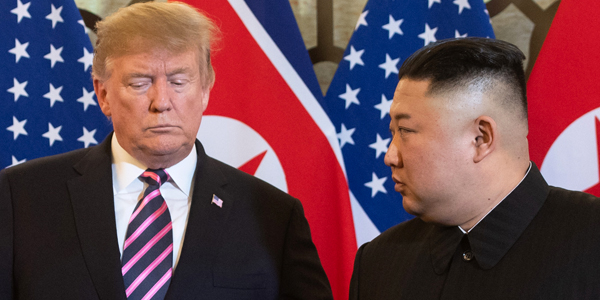 Tensions between the two leaders continue to escalate. Photo: Getty

American military and intelligence officials are nervously bracing themselves for North Korea to test its missile capacity as tensions between Pyongyang and Washington continue to escalate.

North Korea has warned the United States that it is time for the US to choose what “Christmas gift” it wants if no progress is made lifting sanctions, as talks continue to stall between the two countries.

North Korea’s state news agency, KCNA, said on Sunday Kim Jong-un has presided over a meeting with the country’s top military officials to discuss steps “to bolster up the overall armed forces of the country … militarily and politically”.

KCNA reported they: “discussed …  important issues for decisive improvement of the overall national defence and core matters for the sustained and accelerated development of military capability for self-defence”.

The country has already successfully conducted two tests since the month began, but if the North tested a ballistic missile capable of reaching the US at Christmas, it would mark a serious setback for President Donald Trump’s effort to calm tensions between the two counties.

The ultimatum of a Christmas gift has come as North Korea puts pressure on the US to make concessions and lift the tight economic sanctions placed on the country, said La Trobe University’s North Korean expert Dr Benjamin Habib.

“At the start of the year Kim Jong-un put an end-of-year deadline for things to start getting back on track, so that deadline is coming up,” he told The New Daily.

“I would expect some missile or maybe a nuclear test.”

At the centre of the stalemate is a huge trust issue.

The US won’t help lift the tight sanctions on the Hermit Kingdom until the country starts to denuclearise and North Korea has said it won’t do that until sanctions are lifted.

“The sanctions have extended to things like coal and some income streams for the North Korean government and that’s starting to bite,” Dr Habib said.

“If you put aside the obvious nastiness of the NK regime, if you look at the security situation, it’s obvious why they don’t want to give up their nukes.

“They don’t have any real allies. They’re a small country surrounded by big powers.”

The rising tensions also threaten to blight one of Mr Trump’s major foreign policy initiatives as he gears up for his 2020 re-election campaign.

Mr Trump was meant to spearhead peace on the Korean Peninsula but that goal looks increasingly unlikely, said Dr Habib.

“Trump wanted to be the great unifier, but what he tried has failed spectacularly,” he said.

“The Singapore summit was a big window of opportunity. It was unprecedented.

“Trump went, but they missed it. North Korea wasn’t going to give up anything. They missed the window to see where talks would go.”