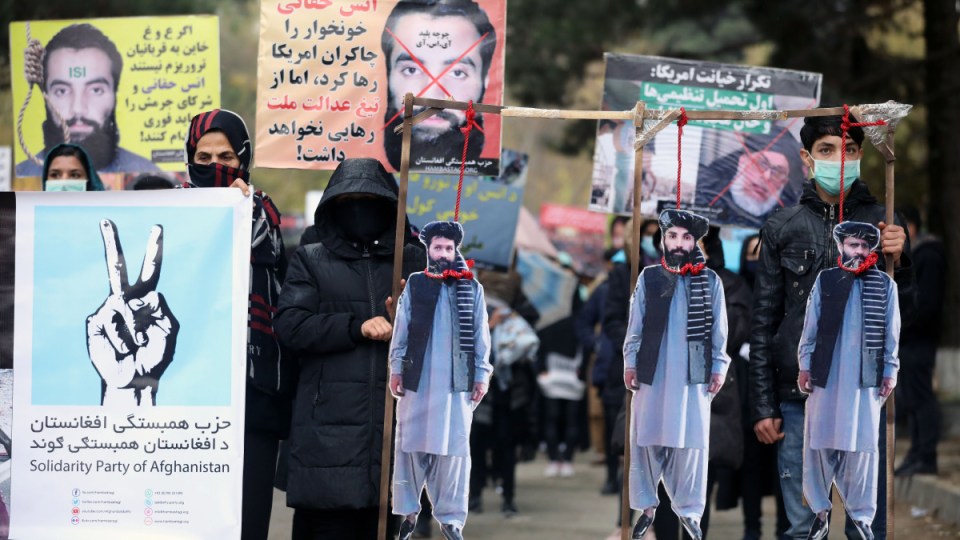 Afghan protesters carry the hanged effigies of freed prisoners at a protest in Kabul on November 15. Photo: AAP
exclusive

A plan to free an Australian teacher held captive for three years in Afghanistan was ditched at the 11th hour after the Taliban reneged on promises made in a prisoner swap deal, officials have revealed.

It was the most promising sign in three years of negotiations that Mr Weeks would return home to Wagga Wagga.

Then with just hours to go until the prisoner handover, the mission was called off without explanation.

New information suggests there were concerns the terror group was not going to keep its word on all parts of the deal.

“The three members of the Haqqani group are still in custody in the Islamic Republic of Afghanistan,” government spokesman Sediq Sediqqi said on Sunday.

“The Taliban’s failure to comply with the conditions has delayed the exchange process.

“The Afghan government will review the exchange process that works for [the] country’s best interests.”

Whether an attempt should be repeated is the subject of much debate among analysts and Afghans frightened of how it could play out for civilians.

And there’s little wonder why: The three people they want to exchange the innocent Australian and American professors for are high-ranking terrorists within the Haqqani Network, an insurgent group closely associated with the Taliban.

They include Anas Haqqani, the son of the group’s founder Jalaluddin Haqqani.

The other prisoners are another Haqqani relative, Haji Mali Khan, and Abdul Rashid, who reportedly holds a position in the Taliban’s political office.

News that the convicted criminals would be freed under the deal has sent chills up the spines of students still haunted by a terror attack at their university in the weeks after Mr Weeks and Mr King were taken hostage.

Former law student Breshna Musazai knows all too well the capabilities of the Haqqani Network.

In August 2016, she was shot twice in the legs and lay among the bodies of her classmates, pretending to be dead, for hours as insurgents lay siege to her university campus.

She told The New Daily she feared freeing members of the Taliban-linked group would only lead to further slaughter of innocent locals.

“These are terrorists who are being released,” Ms Musazai said.

They are dangerous – and [their release] is bad news for Afghans.’’

Ms Musazai said that while she wished the government could find another way that didn’t endanger Afghans, she wanted to see professors Weeks and King freed.

“Not only as a former AUAF student, but as an Afghan, I am happy that they will be released,” she said.

What happened to teachers and students?

Despite a history of fighting and bloodshed in Afghanistan, universities had been largely spared.

That is, until 2016 when terrorists stormed the Kabul campus of American University of Afghanistan, killing 13 people and seriously wounding others including Ms Musazai.

Mr Weeks and Mr King, both English teachers at the campus, had been kidnapped just weeks before that.

According to the men, whose account was recorded in a Taliban video, they were leaving work in August 2016 when their security car was surrounded by heavily-armed Taliban members.

Very little information was initially given to the public about their plight.

But in the background, US intelligence officers were working quickly to find them.

Days after the kidnappings, then-president Barack Obama ordered a secret night-time mission to retrieve the pair.

Seven people were killed in gunfire during the raid on the militants’ hiding hole – but there was no sign of Mr Weeks and Mr King.

The next major clue into the wellbeing and whereabouts of the teachers came in 2017 in the form of two harrowing video pleas from the men.

It was a strategic move by the Taliban no doubt meant to place pressure on the US to negotiate.

A gaunt and visibly frightened Mr Weeks wiped away tears as he pleaded for help.

“It’s the first of January … we have been here for five months,” he said in the first video.

“We are here with no help and with no hope.

In a message directed to his family, he said he feared he would never again see his mother, who was sick at the time.

Deal for peace, or a sign of more violence to come?

Last Thursday’s planned exchange was the closest Mr Weeks had come to freedom.

As well as the likelihood of a prisoner swap, it could also signal a renewed effort to get the insurgent group to talk directly with Afghanistan’s leaders.

While the Taliban had been negotiating with the US administration, it had refused to meet or talk with the Afghan government, which the terror group refers to as a “puppet regime of the west”.

Political analysts believe the deal could involve more than just the safe return of the two foreign teachers, but in fact, also be a message from the Afghan president showing a willingness to negotiate.

“This could be a message to the Taliban that if you are sitting with me, I have the kind of authority to do this [release prisoners],” Kabul-based analyst Omar Sadr said.

“‘I can deliver on certain demands’. Similarly, with this gesture, he seeks from the US to push Taliban to accept the government on the table.”

The release of key Haqqani members could also be a way to placate the Taliban ally, Dr Sadr speculated.

“There was always a possibility that the Haqqani Network might create hindrances in an eventual peace negotiation with the Taliban,” he said.

“This move was perhaps also a way to avoid that by accommodating some of their demands and tying them into a possible peace deal.”

Dr Sadr said how successful this move becomes will only be evident when the Taliban eventually receives Afghan government representatives in talks scheduled to go ahead in Beijing later this year.

However, the mere likelihood of a potential intra-Afghan peace talk has not been enough for the people scarred by the Haqqani Network attack.

They have been left furious that Afghan lives could be in jeopardy.

Will the #US release a single Talib or terrorist for 2 million AfghanLives!? NEVER! Because they don’t negotiate with terrorists. But for 2 American lives, they pressured #AfghanGov to release 3 murderous terrorists, including #AnasHaqqani.#DoubleStandards #AfghanLivesMatter pic.twitter.com/DGKLjme80L

“By releasing [Anas Haqqani], we are giving the Haqqani Network and other terrorist groups a morale boost,” said Idrees Stanikzai, a political activist from Kabul.

“All the terrorist attacks in Afghanistan, whether it is claimed by Taliban or ISIS, can be traced back to Haqqani Network, who provide logistical support to insurgents.”

He added: “Haqqani group has said earlier that we are not interested in peace, but if you need to fight, call us. What then do Afghans get in exchange for release of their members?”

Ruchi Kumar is a journalist based in Kabul, Afghanistan. Andrea Hamblin is The New Daily’s senior news editor.