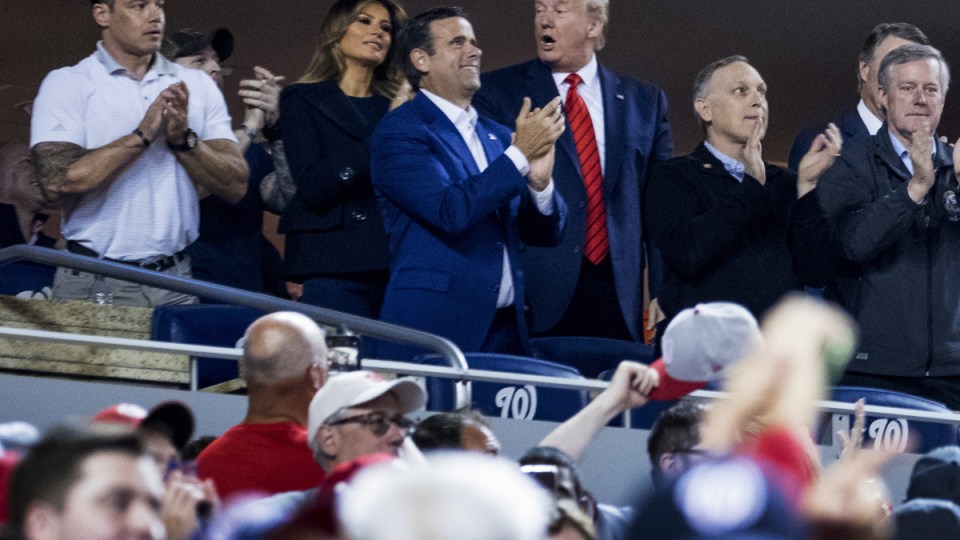 Donald and Melania Trump at the baseball in Washington on Sunday night. Photo: AAP

US President Donald Trump has been met with boos and widespread chants of “lock him up” at a packed World Series baseball game.

The crowd’s reaction came after Mr Trump made a rare Sunday night  (local time) appearance for game five of the series at Nationals Stadium in Washington.

He was joined in the corporate box by his wife, Melania, and five Republican senators, including House minority leader Kevin McCarthy.

The group arrived without fanfare but when Mr Trump was introduced, late in the game, cheers were speedily drowned out by boos.

TRUMP BOOED: President @realDonaldTrump was greeted with boos when he was introduced at Game 5 of the #WorldSeries on Sunday. MORE: https://t.co/lxezGQFLmI

Republican John Ratcliffe, a vocal defender of Mr Trump in the ongoing Democrat impeachment inquiry, stood nearby during the prolonged chorus of boos.

He and the Trumps could be seen smiling broadly and clapping through the taunts.

Major League Baseball commissioner Rob Manfred said he discussed with Mr Trump whether he’d like to throw out the ceremonial first pitch.

The President declined, citing the disruption that would cause fans getting to the ballpark.

It was the first major league baseball game Mr Trump had attended since taking office – he said last week he would like to attend, despite knowing he was likely to get a frosty welcome from the crowd.

It was also the first time the President had attended a major sporting event in Washington since taking office.

Mr Trump’s staff has long tried to shield him from events where he might be loudly booed or heckled, and he has rarely ventured into the neighbourhoods of the heavily Democratic city.

He won just over 4 per cent of the vote in the District of Columbia in 2016.

However, the “lock him up” chant – a reference to chants about Hillary Clinton used at Trump rallies during the 2016 presidential elections – takes the Washington crowd’s reaction a little further.

Mr Trump’s night out at the baseball also came a day after he announced the US had killed Islamic state leader Abu Bakr al-Baghdadi in a secret raid in Syria.

The President left before the game was over.

For the record, Houston Astros beat Washington Nationals 7-1 to take the lead in the series.

‘Lock him up’: Trump endures chants, boos at baseball game