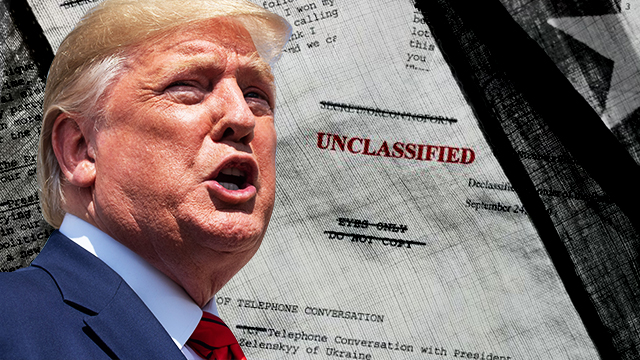 The text messages of high-ranking US officials show the wheelings and dealings between the US and Ukraine.

Three Democratic committee chairmen of the US House of Representatives say they’ve subpoenaed the White House for documents related to their impeachment investigation of President Donald Trump.

Representatives Elijah Cummings of the Oversight Committee, Adam Schiff of the Intelligence Committee and Eliot Engel of the Foreign Affairs Committee said they were forced to issue the subpoena after the White House failed to produce documents they requested in a September 9 letter.

“We deeply regret that President Trump has put us – and the nation – in this position, but his actions have left us with no choice but to issue this subpoena,” the three chairmen said.

The White House was given a deadline of October 18 to hand over the requested files.

Mr Trump has said he would formally object to Congress’s impeachment probe.

Meanwhile, text messages between US and Ukraine officials reveal how the Americans used the promise of a meeting with Donald Trump as bait to get what they wanted from Ukraine.

This revelation prompted Congress to begin an impeachment inquiry.

In a series of SMS exchanges, high-ranking US officials made it clear that the best way for Ukraine’s president to get a meeting with Mr Trump was to promise investigations that could benefit his election campaign.

A string of text conversations show US officials highlighting the importance of Ukraine announcing the investigations for Mr Trump to agree to meet Ukraine’s president Volodymr Zelenskiy.

Another message revealed one US diplomat expressed concern over the “crazy” notion of withholding military aid to Ukraine for the same purpose.

The private conversations were released by the US House Intelligence Committee as part of an impeachment inquiry which heard its first testimony behind closed doors.

The probe is looking at whether Mr Trump pressed Ukraine to investigate former vice president Joe Biden and his son Hunter in connection with Ukrainian gas company Burisma.

Mr Biden, a leading Democratic contender for the 2020 presidential race, is a political rival to Mr Trump and a former vice president.

The text conversations were provided by Kurt Volker, who resigned a week ago as Mr Trump’s special representative to Ukraine.

Mr Volker was the first person to testify at the impeachment hearings behind closed doors and the full texts were later made public by the House Intelligence Committee after some were leaked.

They reveal that US officials pressured their Ukrainian counterparts to launch investigations that could benefit Mr Trump’s personal political agenda in exchange for a meeting between the two countries’ leaders.

One text message, which occurred hours before the controversial July 25 phone call between the two presidents, shows Mr Volker advising that a meeting was tied to Kiev’s agreement to investigate the 2016 US election, according to the committees.

“Heard from the White House – assuming President Z convinces trump he will investigate/’get to the bottom of what happened’ in 2016, we will nail down date for visit to Washington,” Mr Volker wrote.

Later messages between Ukrainian aide, Andriy Yermak, and Mr Volker showed duelling efforts to lock in a date for a Trump-Zelenskiy meeting and to issue a statement from Kiev announcing a “reboot” of relations along with the probes into Burisma and the 2016 election.

In a separate exchange last month, another top US diplomat in Ukraine wrote that it was “crazy” to withhold military aid for the country as it confronted Russian aggression.

“I think it’s crazy to withhold security assistance for help with a political campaign,” the diplomat Bill Taylor said.

Ambassador Gordon Sondland replied to that suggestion by urging Mr Taylor not to hold such conversations in text.

“Bill, I believe you are incorrect about President Trump’s assumptions,” wrote Mr Sondland.

“The president has been crystal clear no quid pro quo’s of any kind. The president is trying to evaluate whether Ukraine is truly going to adopt the transparency and reforms that President Zelensky promised during his campaign.

“I suggest we stop the back and forth by text.”

The cache of texts also included messages from Mr Trump’s personal attorney Rudy Giuliani, who played a major part in the administration’s dealings with Kiev.

The texts add context to the controversial July 25 phone call between Mr Trump and Mr Zelenskiy – in which the Republican president urges Mr Zelenskiy to investigate the Bidens – which kick-started the impeachment probe.

Mr Trump tweeted that it was his duty as president to end corruption event if it meant listing foreign help.

As President I have an obligation to end CORRUPTION, even if that means requesting the help of a foreign country or countries. It is done all the time. This has NOTHING to do with politics or a political campaign against the Bidens. This does have to do with their corruption!

The White House is expected to send a letter to House Speaker Nancy Pelosi arguing Congress cannot conduct an impeachment investigation without first having a vote to authorise it.

The letter was expected to say the administration won’t co-operate with the probe without that vote.

Mr Trump said the resolution would likely pass, but he predicted it would backfire on Democrats.

“I really believe that they’re going to pay a tremendous price at the polls,” he said on Friday.