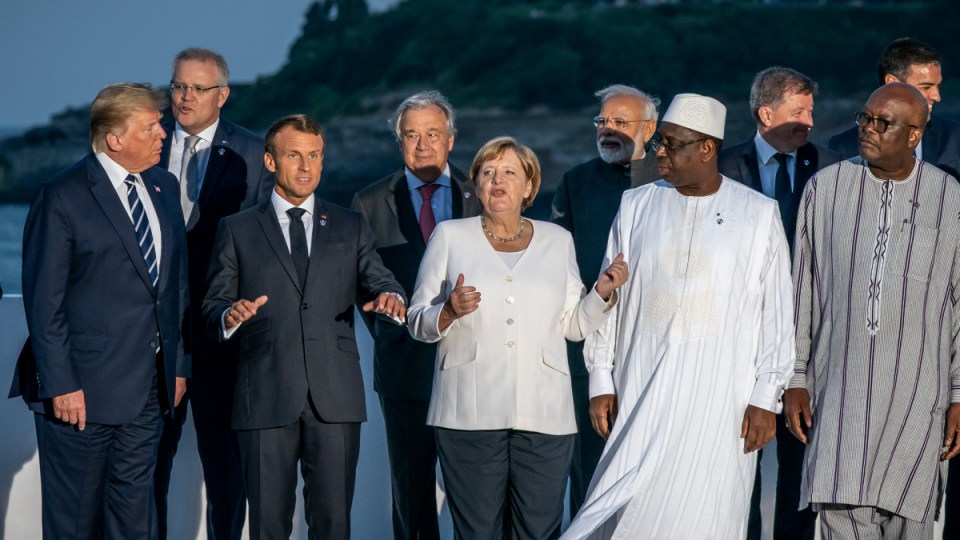 Prime Minister Scott Morrison with other world leaders at the G7 in France. Photo: Getty

Scott Morrison has discussed trade and Australia’s plans to join an international mission in the waters south of Iran with world leaders at the G7 summit in France.

But the Prime Minister was as surprised as the rest of the leaders when Iran’s Foreign Minister Mohammad Javad Zarif joined the gathering in Biarritz.

Mr Zarif made a flying visit for talks with host France at the G7 summit, as Paris ramped up efforts to ease tensions between Tehran and Washington.

The dramatic diplomatic move surprised US President Donald Trump and other world leaders, who were only told at the last minute that Mr Zarif would make an appearance.

Mr Zarif, who is under US sanctions, held more than three hours of talks before heading back to Tehran. He did not meet any US officials.

“Road ahead is difficult. But worth trying,” he tweeted.

Elsewhere, Mr Morrison met German Chancellor Angela Merkel and Japanese Prime Minister Shinzo Abe on the sidelines of the summit, explaining Australia’s decision of last Wednesday to contribute troops, a surveillance plane and a Navy frigate to the US-led effort to protect shipping lanes from Iran.

Neither was concerned about the plan.

“[They had] a great respect for the way that Australia thinks through these issues and is very clear about how we pursue our national interests and do so in a way which is very, very well-targeted,” Mr Morrison said in Biarritz on Sunday.

“We’re very clear about what this was about, what it wasn’t about.”

Met @EmmanuelMacron on sidelines of #G7Biarritz after extensive talks with @JY_LeDrian & Finance Min. followed by a joint briefing for UK/Germany.

Road ahead is difficult. But worth trying. pic.twitter.com/oXdACvt20T

He also spoke about Australia’s contribution during a 20-minute meeting with US President Donald Trump.

During that catch-up, Mr Morrison reiterated Australia’s concerns about the impact the US-China trade dispute is having on the global economy.

Mr Trump announced a further escalation of tariffs just ahead of travelling to France.

“These types of responses, I would say they’re fairly obvious in terms of how that would play out until this matter is resolved,” Mr Morrison said.

But asked if that meant he backed Mr Trump’s approach, the Prime Minister said only he wants to see the dispute end.

Both sides had raised legitimate grievances about the other, he said.

“Equally, you can’t just sort of brush these issues aside forever, they have to be dealt with.”

Trade also came up during the chat with Ms Merkel, with Mr Morrison updating her on some of the concerns raised by Australian farmers over the lengthy list of foods and spirits that Europe wants to protect under geographic indicators.

He said Australia needed to see an ambitious offer of market access from the European Union as negotiations progressed on the deal.

The other trade deal in the works is one that can’t formally start yet: a post-Brexit agreement with Britain.

That will come up during a meeting with new British Prime Minister Boris Johnson on Monday morning (Monday night AEST). He also talked trade with Mr Trump at the weekend.

Mr Morrison anticipated another tough conversation topic with Mr Johnson: “I’m sure he’ll give me a hard time about the fact that they clipped us in the latest Ashes.”

Mr Morrison was alsoabc issuing invitations to leaders to join him in his regular morning swim ahead of the summit’s final day of meetings beside Biarritz’s famous beach, La Grande Plage.

Chilean President Sebastian Pinera was fascinated by Mr Morrison’s regime, quizzing him on where he swam and his prowess ahead of their private talks.