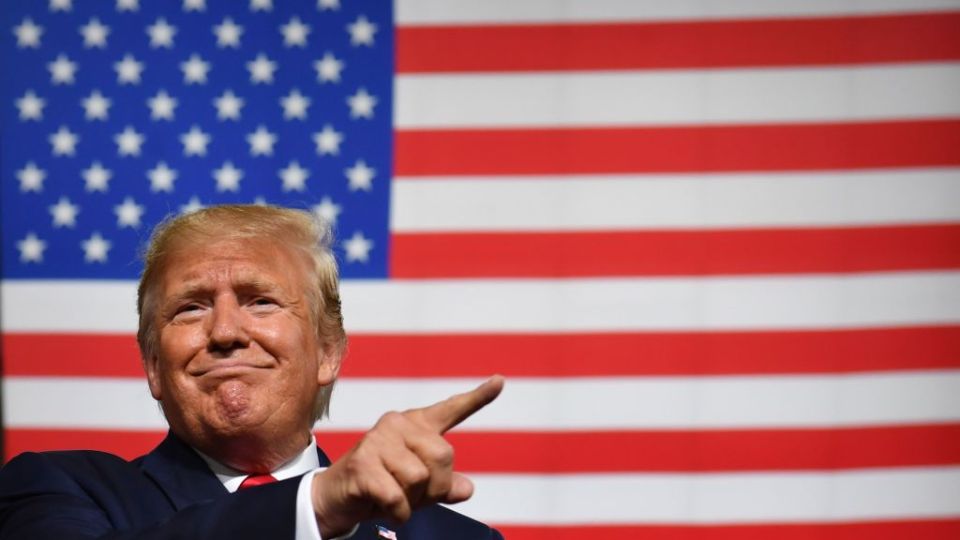 Donald Trump has “ordered” American companies to get out of China after Beijing announced its latest move in an ongoing trade war between the two countries.

In a sign that neither side is backing down, China on Friday vowed to slap new tariffs on an additional $US75 billion ($111 billion) of US exports including soybeans, coffee, whiskey, seafood and crude oil.

The move, in response to America’s earlier tariffs on $US300 billion ($444 billion) of Chinese goods, infuriated Mr Trump who fired a series of angry tweets, accusing China of “stealing” trillions of dollars and saying the US would be better off without them.

Mr Trump called on US firms to bring their businesses “HOME” and start making products in America, issuing the demand on Twitter as an “order”.

“Our Country has lost, stupidly, Trillions of Dollars with China over many years,” the president tweeted.

“They have stolen our Intellectual Property at a rate of Hundreds of Billions of Dollars a year, & they want to continue.

“I won’t let that happen! We don’t need China and, frankly, would be far better off without them.

“The vast amounts of money made and stolen by China from the United States, year after year, for decades, will and must STOP.

“Our great American companies are hereby ordered to immediately start looking for an alternative to China, including bringing your companies HOME and making your products in the USA.”

….Sadly, past Administrations have allowed China to get so far ahead of Fair and Balanced Trade that it has become a great burden to the American Taxpayer. As President, I can no longer allow this to happen! In the spirit of achieving Fair Trade, we must Balance this very….

“Sadly, past Administrations have allowed China to get so far ahead of Fair and Balanced Trade that it has become a great burden to the American Taxpayer,” Mr Trump said on Twitter.

“As President, I can no longer allow this to happen!”

He said the United States would raise its tariffs on $US250 billion worth of Chinese imports to 30 per cent from the current 25 per cent beginning October 1.

At the same time, he announced an increase in the planned tariffs on the remaining $US300 billion worth of Chinese goods to 15 per cent from 10 per cent.

The US will begin imposing those tariffs on some products starting September 1, but tariffs on about half of those goods have been delayed until December 15.

The trade war between the USA and China has been dragging on for months, with conciliatory formal talks interspersed by aggressive tariff impositions which threaten to tip a weakening global economy into recession.

The latest trade tit-for-tat comes as leaders of the Group of 7 major economies prepare to meet in France this weekend.

David French, from America’s National Retail Federation, said it made no sense for US businesses to leave China.

“It is unrealistic for American retailers to move out of the world’s second largest economy, as 95% of the world’s consumers live outside our borders,” Mr French said.

“Our presence in China allows us to reach Chinese customers and develop overseas markets. This, in turn, allows us to grow and expand opportunities for American workers, businesses and consumers.”

"President Trump is making things worse, not better," according to Roger Johnson, President of the @NFUDC. Read the full statement to CNN after China retaliated on $75 billion worth of US goods including soy, beef, and corn. pic.twitter.com/XdWPe2WVmY

Frustrated American farmers also reacted to their president’s latest outburst by accusing him of making the situation worse, saying US soybean exports to China had fallen 80 per cent in the past three years.

“Every time Trump escalates his trade war, China calls his bluff — and why would we expect any differently this time around?” said National Farmers Union president Roger Johnson.

“And it’s no surprise that farmers are again the target.”

Washington is pressing Beijing to narrow its trade surplus and roll back plans for government-led creation of global competitors in robotics, electric cars and other technology industries.

The White House did not immediately respond to questions about what authority the president has to order private companies to change their business practices.