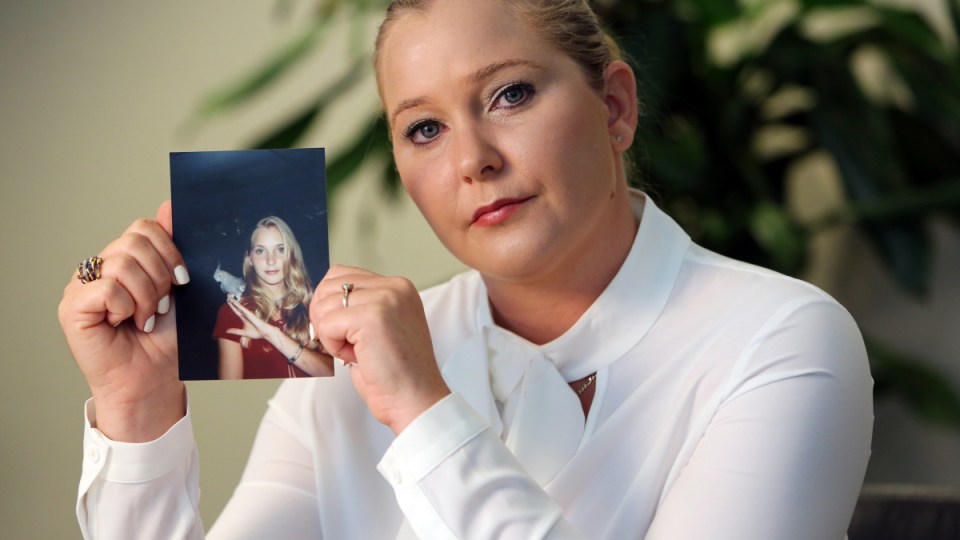 Virginia Roberts Giuffre holding a photo of herself as a child. Photo: AAP

An Australian woman who accused disgraced US financier Jeffrey Epstein of sex crimes has spoken out about his death.

The 36-year-old who filed a since-settled lawsuit against Mr Epstein’s ex-girlfriend, British socialite Ghislaine Maxwell, said she was grateful he will never harm anyone again, but said she was angry there will be no chance for him to answer for his conduct.

It comes as US President Donald Trump faces a barrage of criticism for promoting conspiracy theories suggesting Bill Clinton was involved in the apparent suicide of Mr Epstein in his New York jail cell.

The FBI and the Department of Justice’s inspector general have opened investigations into the death of Mr Epstein, who a source said had been taken off suicide watch.

Ms Giuffre told The New York Times her husband woke her early on Sunday in Australia to share the news that the wealthy financier had died on Saturday morning (US time).

“We’ve worked so hard to get here, and he stole that from us, too,” Ms Giuffre said.

Ms Giuffre claimed in a 2016 deposition in the court filings that Mr Epstein, 66, and Ms Maxwell, 57, had groomed her to become a “sex slave” for him and his circle of cohorts, when she was just 16.

She alleged in the deposition that she had been directed to have sex with Prince Andrew in three different locations – in Ms Maxwell’s London apartment, in New York and at Mr Epstein’s private island, Little St James, in the US Virgin Islands.

The Washington Post reported that Ms Maxwell hit back in a 2016 deposition: “Virginia is an absolute liar and everything she has said is a lie. Therefore, based on those lies I cannot speculate on what anybody else did or didn’t do …. everything she said is false.”

Ms Giuffre successfully sued Ms Maxwell for defamation in 2017, and while details of the settlement were not made public, The Miami Herald reported the payout was in the millions.

Mr Epstein’s death came hours after the release of 2000 pages of court documents, part of a related lawsuit, that revealed allegations that Mr Epstein and Ms Maxwell, ordered her to have sex with powerful men.

The records contain graphic allegations against Mr Epstein, who pleaded not guilty to sex-trafficking charges, had been denied bail and was facing up to 45 years behind bars on federal sex trafficking and conspiracy charges. He was awaiting trial in 2020.

The documents, for the first time, reveal the names of the men who Ms Giuffre alleges Ms Maxwell and Mr Epstein forced her to have sex with, as well as new details about Mr Epstein’s relationships with Bill Clinton, Prince Andrew and Mr Trump.

Soon after the reports of the apparent suicide of Mr Epstein, conspiracy theories began to swirl, one involving President Clinton.

And President Trump appeared only too happy to fan the flames, retweeting two posts alleging Mr Epstein’s death either wasn’t a suicide, or it was faked and that people in high places wanted Mr Epstein dead.

The first post featured a two-minute video by Terrence K. Williams, a conservative commentator and comedian.

“Somebody got paid not to do their job, so somebody can get knocked off, so information don’t come out,” Williams said in the clip, suggesting the Clintons had arranged for Epstein to be killed.

There is no evidence to support Williams’ claim.

The President then retweeted a second.

Several other theories about Mr Epstein, however, have been debunked.

Days after his arrest, online memes and Facebook statuses wrongly claimed the Obama administration, in order to protect former President Clinton, forged a once-secret deal in 2008 in Florida that allowed him to plead guilty to soliciting a minor for prostitution to avoid more serious charges.

The deal was actually executed before President Barack Obama took office, and was under former President George W. Bush.

There was also a doctored photo, shared by thousands on Twitter and Facebook, falsely claiming to show Mr Epstein with Mr Trump and a young Ivanka Trump.

Both Mr Clinton and Mr Trump have denied being privy to Mr Epstein’s alleged sex-trafficking activities.

A spokesperson for Mr Clinton, Angel Urena said the former president “knows nothing about the terrible crimes Jeffrey Epstein pleaded guilty to in Florida some years ago, or those with which he has been recently charged in New York”.

He said that, in 2002 and 2003, Mr Clinton took four trips on Mr Epstein’s plane with multiple stops and that staff and his Secret Service detail travelled on every leg.

Mr Trump has acknowledged knowing Mr Epstein, once quoted as referring to Mr Epstein as a “terrific guy” in New York Magazine.

“He’s a lot of fun to be with,” the President said at the time.

“It is even said that he likes beautiful women as much as I do, and many of them are on the younger side.”

But Mr Trump said he had since “had a falling out with him a long time ago”.

Australian Epstein accuser speaks out over his sudden death