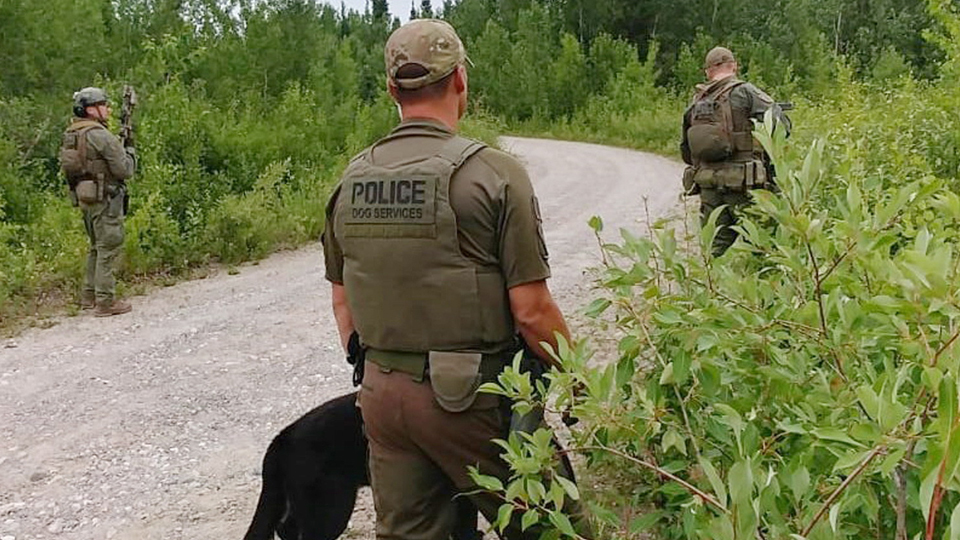 Police searching in the Gillam area on Saturday. Photo: AAP

Canadian police have swarmed a tiny settlement in Manitoba after a fresh sighting of the fugitive teenagers suspected of three shooting deaths.

Police descended on remote York Landing late on Sunday (local time) after reports Kam McLeod and Bryer Schmegelsky had been spotted scavenging for food in the area.

“A heavy police presence can be expected in the area,” the RCMP wrote on Twitter.

York Landing, which as fewer than 500 residents, is about 200 kilometres from Gillam – where the massive manhunt had previously been focused. It is accessible only by boat.

Two members of the Bear Clan, an indigenous community policing group, possibly spotted the suspects on Sunday afternoon in what appears to be the most significant tip in the frantic search for the duo in a remote area of northern Manitoba.

“They fit the description of what was given in the RCMP report,” Bear Clan member Travis Bighetty, who travelled hundreds of kilometres from Winnipeg to help in the search, told CBC.

“It didn’t click right away, it took a few moments.”

Soon after, social media was ablaze with reports Kam McLeod and Bryer Schmegelsky were in custody, and that shots had been fired. The RCMP was quick to deny both claims.

Despite reports – there is no one in custody at this time. RCMP officers remain in the community of York Landing & continue to investigate the reported sighting of the two suspects. All required resources are being used in this ongoing investigation. Updates to follow.

All efforts are being made in York Landing to apprehend two individuals matching the description of the suspects. The safety of community members is our priority. We remind residents to stay inside & check all doors & windows to ensure they are closed & locked. #rcmpmb

The local indigenous spokesman, Chief Leroy Constant, confirmed that McLeod, 19, and Schmegelsky, 18, had not been caught. The Royal Canadian Mounted Police’s helicopters, dog squad and emergency response team would remain in York Landing until further notice.

“We are urging everyone to remain indoors with windows and doors locked,” Chief Constant wrote on Facebook.

“Patrols of the community will be done on a 24-hour basis.”

The RCMP was conducting ground searches with dogs and armoured officers. But strong winds were make helicopter and drone searches difficult.

McLeod and Schmegelsky are suspected of shooting dead Australian tourist Lucas Fowler, his US girlfriend and a university botanist.

Reports of Monday’s development came as the RCMP urged people to stop posting tips about potential sightings to social media. It said investigators had received more than 200 tips in the past five days but the manhunt might be hampered if tips were not reported straight to police.

The RCMP also asked people not to reveal on social media where they were seeing its officers.

McLeod and Schmegelsky have been on the run since the bodies of Mr Fowler, 23, from Sydney, and his North Carolina girlfriend Chynna Deese, 24, were found dead on the side of a highway 3000 kilometres away in Canada’s west on July 14.

Locals around Gillam predicted the teenagers would face extreme challenges – polar and black bears, wolves, irritating black flies and mosquitos, dense scrub and swamps – if they did, as suspected by the RCMP, enter bushland a week ago, after setting fire to their stolen getaway Toyota RAV-4.

Again, absolutely no confirmation the two #Canadamanhunt suspects from #PortAlberni have been caught. There is social media conjecture. What we do know… @rcmpmb are acting on a new tip in this area. pic.twitter.com/eqGbzPL7WI

The Canadian government, desperate to catch the fugitives, immediately approved the RCMP’s request for military support.

On the ground authorities went door-to-door canvassing locals in their homes and searching abandoned buildings in the hope of finding the duo or picking up clues.

The sweep included an abandoned hydroelectric building with 600 rooms.

The RCMP surmised the teenagers torched their RAV-4 and fled on foot in Gillam because there have been no reports of stolen cars or carjackings in the area.

After days of fruitless searching, the RCMP on Friday admitted that it was “exploring the possibility” the teenagers might have fled Gillam with the help of a third person unaware the two were fugitives.

McLeod and Schmegelsky, long-time school friends from Vancouver Island, allegedly embarked on their killing spree on July 14 near Liard Host Springs, in northern British Columbia, when they encountered Mr Fowler and Ms Deese.

The old Chevrolet van Mr Fowler and Ms Deese were driving broke down on the Alaska Highway and left them stranded.

Their bullet-riddled bodies were found in a ditch near the van.

Four days later and 470 kilometres away, University of British Columbia botanist Leonard Dyck was found dead on another highway.