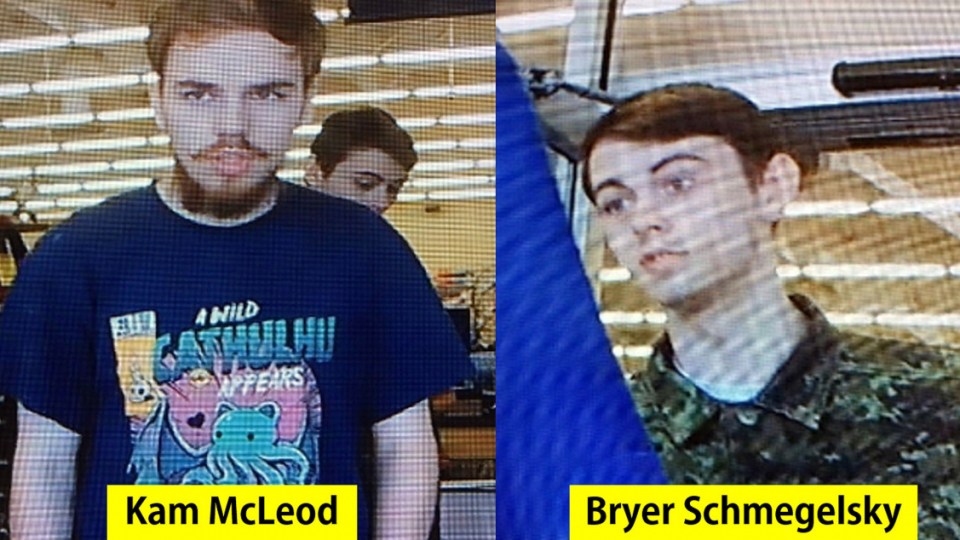 Canadian police are urging the public to stop posting tips on the whereabouts of two murder suspects to social media, and instead call authorities directly to prevent delays in the investigation.

It has now been more than two weeks since Sydney tourist Lucas Fowler, 23, and his American girlfriend Chynna Deese, 24, were shot dead on a highway in British Columbia, but the manhunt for the alleged killers continues.

Suspects Bryer Schmegelsky, 18, and Kam McLeod, 19, are yet to be found, despite extensive searching with 1,000 officers, helicopters and tracker dogs deployed as well as assistance from the Canadian Air Force.

This morning the Royal Canadian Mounted Police (RCMP) said it believed the pair were still near the rural town of Gillam in the province of Manitoba, with no new information indicating they have fled the area.

Investigators have received more than 200 tips in the past five days but the RCMP warned that the investigation could be hampered if tips were not reported straight to police.

“Multiple tips of sightings have been posted to social media & NOT directly reported to police. If the tips are valid, it could create a substantial delay in the response by police,” the RCMP tweeted.

Officers have completed a canvass of Fox Lake Cree Nation and will now focus on completing a canvass of properties in Gillam where so far 250 homes have been visited.

Police have warned the public that Mr McLeod and Mr Schmegelsky may have changed their appearance and said there was a chance the pair inadvertently received assistance to leave the area.

The pair have already been charged with the murder of 64-year-old Leonard Dyck who was found shot dead in British Colombia on July 19.

Just four days earlier, the bodies of Mr Fowler and Ms Deese were found on the Alaska Highway, 2,000 kilometres away.

He said the couple were inseparable and described their fate as “the worst-ever love story”.

Mr Schmegelsky’s father, Alan, last week told Canadian media the childhood friends were likely to go out “in a blaze of glory”.