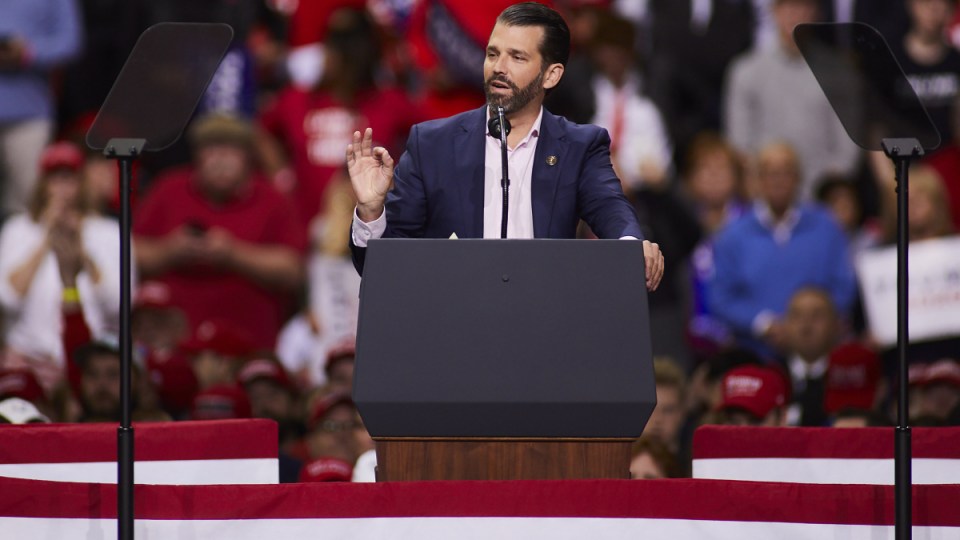 Donald Trump jnr at a rally for his father in Wisconsin. Photo: Getty

The US Senate Intelligence Committee has subpoenaed the President’s son Donald Trump jnr to answer questions about his contacts with Russia, two congressional sources say.

The panel wants to question Mr Trump jnr about testimony he gave in September 2017 that was subsequently contradicted in public testimony by former Trump attorney Michael Cohen, one of the sources said.

The committee is one of the few in the Senate that has been conducting serious investigations related to Russian meddling in the 2016 US election. The President’s son-in-law, Jared Kushner, has appeared before the panel at least twice.

During his Judiciary Committee appearance in September, the source said, Mr Trump jnr was asked about the extent of his involvement in a plan to build a Trump Tower in Moscow.

“Like I said, I was peripherally aware of it, but most of my knowledge has been gained since as it relates to hearing about it over the last few weeks,” he told the committee, according to an official transcript.

In testimony before the House of Representatives Oversight Committee, however, Mr Cohen, said he briefed Trump family members “approximately 10 times” about the Moscow Trump Tower project, and that Mr Trump jnr and his sister Ivanka were among those he briefed.

Mr Cohen has also told Congress that some reimbursement cheques issued to him for hush money payments to an adult film star who said she had an affair with President Trump were signed by Mr Trump jnr, as well as the Trump Organisation’s chief financial officer.

In his report on Russian meddling in the US presidential election in 2016, Special Counsel Robert Mueller’s team of prosecutors reported that there was a “reasonable argument” that Mr Trump jnr violated campaign finance laws.

But Mr Mueller’s team concluded they did not believe they could obtain a conviction.

A lawyer for the President’s son did not immediately respond to a request for comment on Wednesday.

A Senate Intelligence Committee spokeswoman declined to discuss details of its own long-running investigation into Russia’s election interference.