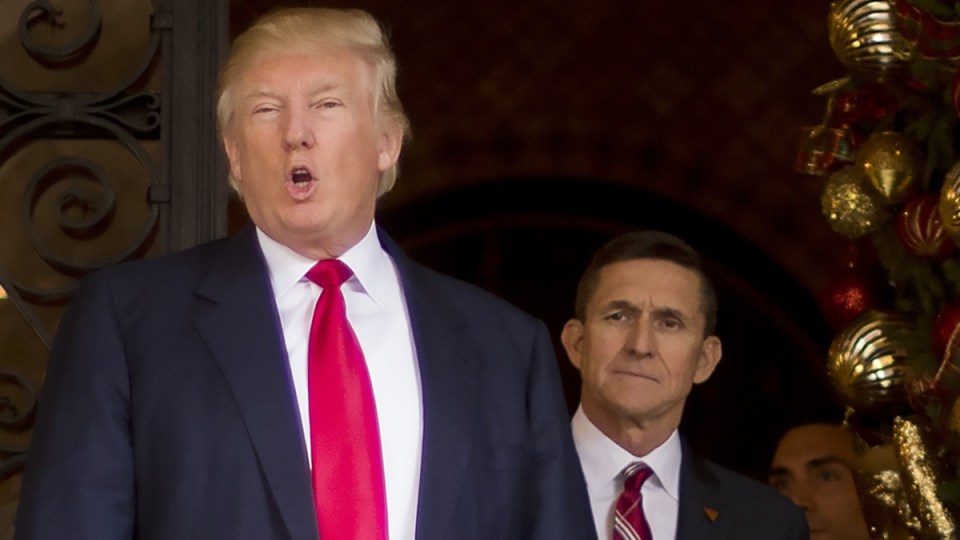 The news that Donald Trump’s former national security adviser, Michael Flynn, has pleaded guilty to lying to the FBI is further evidence the American polity is rotting and that a once great nation is at risk of going the same way.

Whatever Trump says to distance himself from Flynn’s actions, there’s no escaping that four members of the president’s campaign team have now all been charged with felonies and more are almost certain to follow.

So much for Trump’s promise to drain the Washington swamp. To the contrary, he’s expanded it, fenced it and put in a diving board.

Flynn’s evidence now sets up impeachment charges against Trump on the basis that his administration sought to subvert US foreign policy before taking office.

And, of course, there’s also the small matter of possible obstruction of justice charges springing from Trump’s decision to sack former FBI chief, James Comey, over that “Russian thing”.

The latest stunning development in the investigation by special counsel Robert Mueller came at the end of two months I spent in the US gauging the Trump effect.

I went back in September to take the pulse of the place and to learn whether the global view of Trump as a doltish opportunist is shared by Americans.

I based myself in Trump’s hometown of New York – where they sell F*** Trump buttons on street corners – and visited his adopted state of Florida – where they sell Trump as Superman T-shirts and sport baseball caps that say, “Make America Great Again”.

And after two months living, travelling and reporting from there, my fondness for the country was tested by anxiety, concern, even anger over what it is becoming.

America is spiralling down into a terrible place.

America is spiralling down into a terrible place. Optimism has been replaced by pessimism and the energy of its people is being wasted and misdirected as the country descends into a vicious tribalism fuelled by a delusional and hapless leadership.

When I finally said goodbye to it last week to return home I did so with a heavy heart. It was as if I was farewelling a troubled, infirm friend who might not survive a life-threatening condition. Certainly it will get worse before it gets better.

Differences have become deep, deep divisions and there’s no telling where it might end. The Mueller investigation will either save the country or imperil it even more.

America now consists of two roughly equivalent tribes only interested in advancing their own interests, rather than those of the nation they profess – endlessly – to cherish. And there are no agreed truths. Trump has seen to that with his lies and delusions.

One tribe is overwhelmingly white, lives in the so-called flyover zone that lies between the coasts, aggressively embraces their faith and nationalism and defends their president no matter what.

The other tribe lives on the coasts, includes pretty much every minority, has little time for religion and is openly contemptuous of Trump.

And, boy, are they going at it, goading each other at every turn, condemning, never condoning, dismissive of anything they don’t hold dear.

They cling to what the psychologists call “confirmation bias”, seeking out or accepting only that which confirms their particular view of the world. Then they share it immediately and never-endingly on social media. It’s polarisation at warp speed.

Taken to the extreme, it means there can never be any agreement on anything.

One side says Mueller is searching for the truth while the other condemns him as an agent of the left who wants to unseat a democratically elected president.

And there, pouring accelerant on the flames, is Donald Trump.

At a time when America desperately needs a uniting force, they’ve got a conqueror whose disdain for the truth is breathtaking.

If Trump was a smart man he’d see he’s uniquely placed to lead America out of the mess he’s helped to create. But he’s not a smart man – he’s a narcissistic, sociopathic, winner-take-all who’ll wreck the joint rather than admit a wrong, much less a failure.

Trump has given up trying to govern for all Americans. That sentiment lasted about as long as his victory speech 12 months ago. Now he only plays to his base.

And it’s holding firm. Probably will, no matter what. As Trump himself said during the campaign that delivered him high office: “I could stand in the middle of Fifth Avenue and shoot somebody and I wouldn’t lose any voters.”

Many Americans fear the consequences of any genuine push for Trump’s impeachment for wrongdoing or removal because of his deteriorating mental state.

They’ve been primed to dismiss any hard evidence that might emerge as the work of the rival “tribe”. Even the arrests of the four key Trump campaign officials have been dismissed by the White House as of little moment. Anything else that threatens his standing is “fake news”.

And the age-old problems at home of gun violence, racism and financial inequality are getting worse, not better.

Desperate for a political win, Trump and his Republican enablers in Congress and the Senate are pushing through a tax bill that will deliver huge windfalls for the super-rich while blowing out the deficit by trillions. It’s potentially catastrophic for the country’s future generations.

The democratic process itself is in strife. During my stay The Washington Post turned over its Sunday magazine to 38 conservative and liberal identities in the hope of finding ways to “fix American democracy” because “in so many ways, the underlying conditions of US democracy need repair”.

Their “solutions” included simple tweaks such as compulsory voting and Saturday polls – let’s hear it for Australian democracy – to compulsory military service and bans on social media. Nothing will be done, of course.

Meanwhile the system is pretty much rigged to deliver Republicans a head start in just about every political contest.

American playwright Ayad Akhtar, whose new play Junk mines the themes of greed and corporate immorality, was recently asked in a New York Times interview how he saw the state of the nation.

“We’re in Pottersville now,” he said, “not Bedford Falls.”

It was a reference to the alternate reality of Frank Capra’s It’s A Wonderful Life, in which hero George Bailey is forced to confront the ugly flipside of his small American home-town after it abandons long-held values and descends into wretchedness under a heartless and rapacious overlord.

When he made the film in 1946, Capra probably didn’t mean it as an allegory of 21st century America. But it’s looking that way today.

In the end, Bailey escapes the wretchedness of Pottersville because of the intervention of a guardian angel. America could sure use one now.

God bless America – it needs all the help it can get