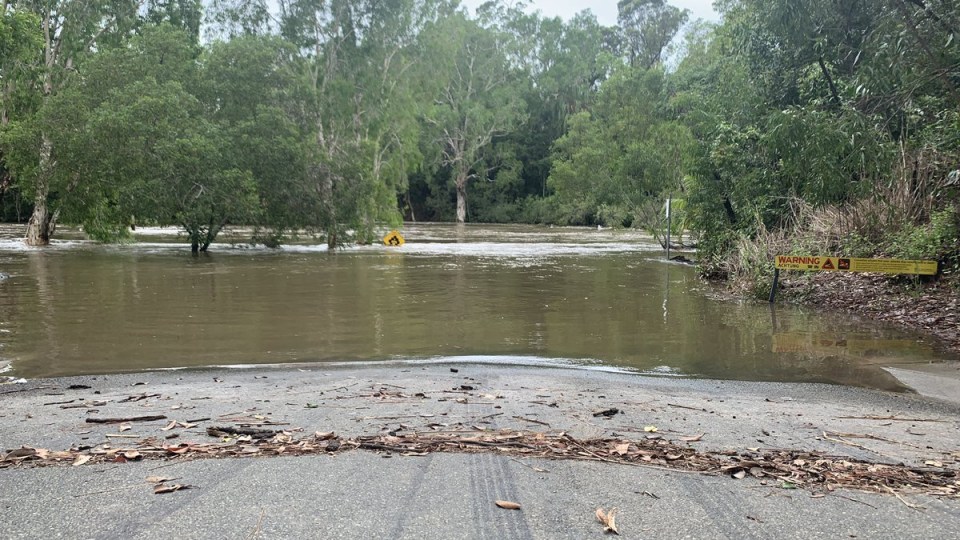 The Bureau of Meteorology has issued flood warnings for parts of NSW, Queensland and Victoria. Photo: Twitter

Dozens of people have been rescued from a flooded NSW caravan park, as torrential rain and wild winds hit much of the state’s north and Queensland.

Four SES crews ferried up to 30 visitors to safety from the park in Bingara, in New England, late on Wednesday night.

It was just one of several rescues in NSW in the previous 24 hours, as emergency services in three states bolster their resources to prepare for the wild weather. Queensland can also expect to be soaked on Thursday, while the system will head south to deliver a drenching to the ACT and Victoria on Friday.

Heavy rain began across the NSW north-west early on Thursday afternoon. Tibooburra, on the Queensland border, had winds of up to 104km/h, and also got 13 millimetres of rain in just 20 minutes.

In the Upper Hunter, Merriwa had almost 16 millimetres between 1-2pm.

“This is a fast-moving event in places. The risk is not just from the long, slow rainfall, but these sharp, short thunderstorms,” NSW SES deputy commissioner Daniel Austin said on Thursday.

“People across NSW have had a couple days of warning … we’re asking people across the whole state to take that into account and be prepared.”

There are flood warnings for many catchments in NSW, with some parts of the state forecast to receive a month’s worth of rain by the end of the week.

The Bureau of Meteorology has warned the rain is likely to cause local and minor to major flooding across NSW catchments, with higher risks in the north-west slopes.

The Bureau of Meteorology warned a “very moist and unstable air mass extends across the state”, as a low pressure trough in South Australia combines with a tropical air mass coming from the north.

The warnings, which extend to the Victorian border, cover many catchments that are already prone to flooding due to recent rainfall.

It’s likely there will be no reprieve until the weekend, with thunderstorms expected to continue until Friday night on the mid-north coast and northern rivers.

The northern rivers region is expected to receive torrential rain that the SES warns will increase the risk of flash flooding.

Severe thunderstorms, reaching from Mount Isa in Queensland’s north-west, across to Stanthorpe in the state’s south-east, are also expected on Thursday afternoon.

“A large proportion of the state [is expected] to be affected, which will result in flash and riverine flooding in many areas, potentially up to major level as well,” he said.

“The SES is urging communities to be aware of your local forecasts, monitor the local reports from the bureau, know your local risk.”

There has already been some flooding in northern NSW, with state Police Minister David Elliott confirming more than 190 calls for help overnight on Wednesday.

Areas around the Gwydir River in the northern tablelands had huge falls on Wednesday, with 94 millimetres at Delungra and 76 millimetres near Narrabri on NSW’s north-west slopes.

Bureau of Meteorology senior meteorologist Jane Golding said that was more rain than Narrabri would typically receive for all November.

There was another rescue near Narrabri late on Wednesday after an empty school bus and three four-wheel-drives, including one with children inside, got caught on a road between two creeks that had risen quickly.

Mr Austin said all involved stayed in place, rather than drive through the floodwaters, in a “heartening” response to the danger.

“They called emergency services and we worked together to get those people out,” he said.

“That’s a really positive outcome that highlights what you can do and what you shouldn’t do: Driving through floodwaters.”

There have been six other flood rescues across the state in the past 24 hours as fast-rising rivers and flash flooding lead to danger for some residents. The bulk of SES’s calls have come from north-eastern NSW, with some storm-related pleas from Sydney.

The deluge is expected to trickle down to Victoria, with the weather bureau also issuing a heavy rainfall warning of Friday across eastern parts of the state.

“The low pressure system is not done with its wrath over the south-east of the country,” she told News Corp.

“As it moves into the Tasman it will direct a vigorous onshore flow across the Gippsland area, with another dangerous situation emerging there.”

Areas on alert include Morwell, Traralgon, Sake, Moe, Bairnsdale and Orbost, where flash flooding is expected.