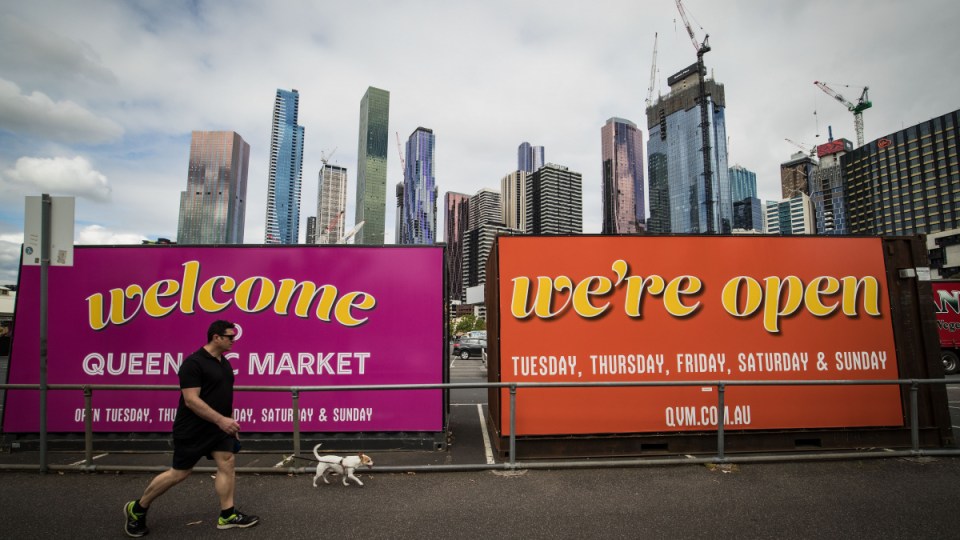 Most Melbourne businesses will be able to reopen, with strict limits on customer numbers. Photo: Getty

Friday marks four weeks without a new case of coronavirus – a result officially confirmed by state health authorities early in the day.

Some 9828 Victorians were tested in the past 24 hours.

Health authorities say 28 days with no new cases means the virus has been eliminated from the community, given that period represents two 14-day incubation periods.

Just three months ago, Victoria had 7880 active cases on August 11.

The last COVID-19 patient in a Victorian hospital was discharged on Monday, leaving the state without an active case.

NSW is also edging closer to eliminating the virus, confirming its 20th day in a row without community infections on Friday. It also had four more cases in returned travellers in hotel quarantine.

In Victoria, despite the good news, the Department of Health and Human Services has warned more virus fragments have been found as part of its wastewater surveillance testing program.

This time it was detected in a sample from a treatment plant in the Geelong suburb of Corio. Residents and visitors who were in the area from Saturday to Tuesday have been urged to come forward for testing.

Hotel quarantine was the ignition point for the state’s devastating second wave, which killed more than 750 people and infected more than 18,000 others.

An inquiry into the botched program will hold its final hearing on Friday, with new statements from Premier Daniel Andrews, chief health officer Brett Sutton and others expected to be released.

Mr Andrews will also face questions about the state’s handling of the crisis as he appears before the Public Accounts and Estimates Committee.

Ahead of Victoria’s hotel quarantine system restarting for international arrivals on December 7, Mr Andrews has all but ruled out a move to home quarantine – a key recommendation of the inquiry’s interim report.

“We’re going to have a hotel-based system but it will look and be different to what it was last time,” he said on Thursday.

Meanwhile, Tasmania will become the latest state to reopen to Victoria on Friday after NSW removed its border checkpoints on Monday. About 700 people are expected to arrive in Tasmania from Victoria on Friday – with the border finally open after eight months.

Queensland will allow quarantine-free travel for Victorians on December 1.

Despite the state’s milestone, Mr Andrews has said he will wait until December 6 to announce any further relaxation of coronavirus measures.

Anyone who visited Armada Arndale Shopping Centre and Port Adelaide Plaza over two weekends has been asked to monitor for coronavirusa symptoms and get tested immediately if they appear.

By Thursday night, there were 31 cases linked to the Parafield outbreak, with 4800 people deemed close contacts and in isolation. No new cases were added on Friday.

He also announced a host of virus rules would be wound back. They include restrictions on the SA border with Victoria, which will all drop from December 1.

“This will be a huge relief for many people who have been adversely affected by these border restrictions,” he said on Friday.

SA will also ease a host of rules for venues and gatherings so “we can chart our course back to where we want to be by Christmas”, Mr Marshall said.

SA Health remains concerned about the twin threat of soaring temperatures and Black Friday sales as it battles the Parafield outbreak.

Thousands of people are expected to flock to Adelaide’s beaches on Friday, with the city forecast to swelter with a top temperature of 40 degrees.