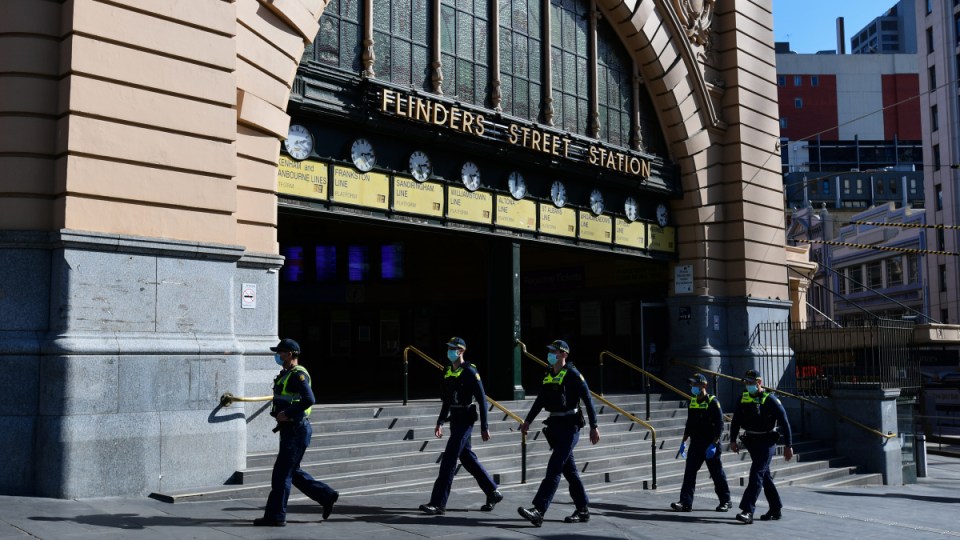 Melbourne's curfew has become one of the most controversial virus measures.

Victoria’s COVID cases have spiked to their highest level in days, amid reports the state government is preparing to extend Melbourne’s tough Stage 4 lockdown by a fortnight.

Thursday’s daily tally of new cases was 113 – the first day with more than 100 since 114 were confirmed last Sunday.

Fatalities also jumped to 15, after two days in the single figures. They bring the state’s death toll from the pandemic to 591 and the national toll to 678.

Many of the deaths reported in Victoria this week have occurred earlier than in the previous 24 hours, and are being reported by aged-care facilities following a reconciliation request from the federal government.

The state’s fatalities spiked to 41 on Monday, but 33 were from as early as July as aged-care homes caught up with the order.

The leap in daily infections came as the state government denied leaked reports that Melbourne’s tough Stage 4 lockdown will be extended by a fortnight beyond September 13.

According to a leaked draft of a purported two-stage plan to ease the state out of its lockdown, published on Thursday by the Herald Sun, only small concessions are likely for metropolitan Melbourne and regional Victoria from the middle of September.

The paper said the city’s daily curfew and strict limits on businesses and how far people can travel would be extended until September 28.

Melbourne’s 8pm-5am curfew is likely to remain until September 28, according to the draft. As it is lifted, the phased return of primary and secondary students to schools will also begin.

Up to five people, including children, from up to two households will be allowed to meet outdoors for social interaction, the Herald Sun cited the draft as saying.

But the state government said the leaked draft was out of date.

“We know every Victorian wants certainty about the future – for them, for their family and for their work. By the end of the week, we will lay out a plan to reopen our state,” an Andrews government spokesman told The Age on Thursday.

Victorian Chamber of Commerce chief executive Paul Guerra said the draft plan was different to what he had seen in government briefings.

“I’ve never seen that plan before and my phone was blowing up with text messages,” Mr Guerra he told ABC Radio Melbourne.

“We’ve been working closely with the state government this week … to work through a template that the Premier outlined last weekend.”

He said industry bodies and officials had been working on the “traffic light” system contained in documents discussed in consultation sessions this week.

Federal Treasurer and Victorian MP Josh Frydenberg played down the contents of the leaked document, saying “I will wait for the final plan from the Premier on Sunday”.

That’s the day Mr Andrews has said he will release separate plans for the paths out of lockdown for Melbourne and regional Victoria.

On Wednesday, Victoria’s chief health officer Brett Sutton warned masks might remain mandatory in Melbourne and regional Victoria beyond the scheduled September 13 end to the lockdown.

“I think we’ll see masks for the next month in one form or another,” he said. “It may not be all settings at all times.”

“It’ll be a consideration to continue (curfew),” he said.

Victoria’s lower house will rubber-stamp a six-month extension to state of emergency powers on Thursday after the bill narrowly passed through the upper house in a marathon sitting.

The state government also got the green light to extended a state of disaster, bringing it into line with the state of emergency.

Mr Andrews warned people not to read too much into the extension.

“That doesn’t necessarily mean that either the state of emergency or the state of disaster will automatically come off on the 13th,” he said.