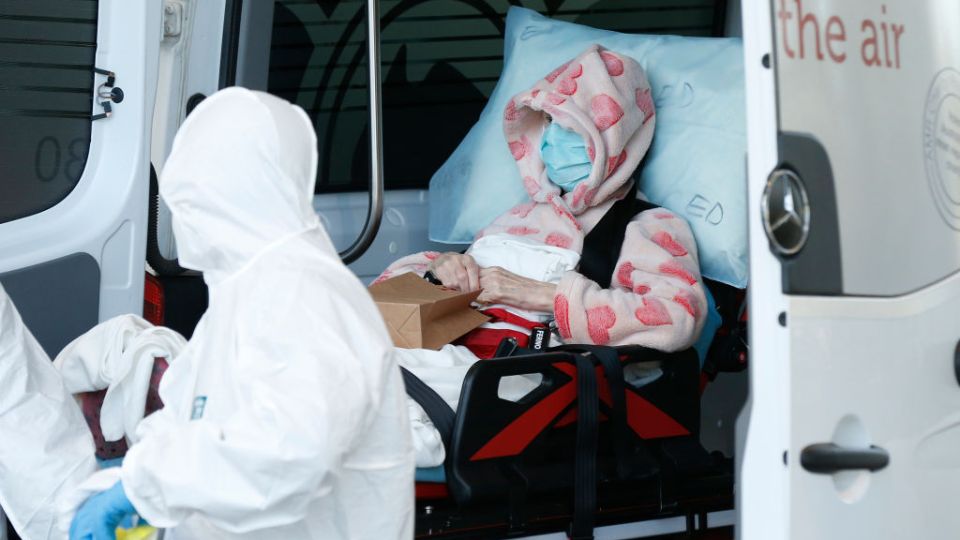 More than 20 of Monday's fatalities were deaths in aged care not reported until Sunday.

Victoria’s coronavirus daily death toll has soared to 41, while infections have fallen to a new low of 73.

State health authorities said Monday’s COVID fatalities – which far outweigh any other day yet in the pandemic – were boosted by reports of many deaths in aged care in the weeks leading up to August 27 but not officially reported until Sunday.

Before Monday, Victoria’s deadliest day from the pandemic was August 17, when 25 fatalities were reported. There were also two days last week with COVID tolls of 23 and 24.

Monday’s figures bring to 565 the number of Victorian lives lost to the virus (Australia’s national toll is 652).

The soaring toll somewhat overshadowed the daily figure of 73, which is the lowest since July 5, and well down on 114 reported on Sunday.

Premier Daniel Andrews said eight of the deaths had come in the past 24 hours. The other 33 were past fatalities in aged care.

Elsewhere, NSW reported 10 more COVID cases on Monday, including four linked to the Sydney CBD outbreak. It has grown to 34 cases.

Queensland had one new infection, linked to the youth detention centre cluster in Brisbane.

Back in Victoria, Mr Andrews has also promised to reveal more about plans to help businesses recover from the bitter blows of the state’s second wave of COVID-19.

“I will make some announcements tomorrow in relation to how we’re going to engage with industry, for instance, to make sure that we are getting the latest and best input around what that opening up should look like,” he said on Sunday.

Victoria’s tight virus restrictions are dragging down the national economy and the federal government ramped up the pressure on the Andrews government on Monday.

Federal Treasurer Josh Frydenberg warned the fallout will only get worse as he revealed data showing the devastating effect of the lockdowns on the state’s economy.

The federal government anticipates there will be more Victorians on JobKeeper than the rest of the country combined in coming months.

Mr Frydenberg said without any sort of plan for reopening businesses, the economic toll on Victoria and wider Australia would be severe.

“The damage is immense, yet the Premier hasn’t provided a road map out.”

Metropolitan Melbourne faces at least another fortnight of strict Stage 4 restrictions, including an 8pm to 5am curfew and a ban on travelling further than five kilometres from home.

But deputy chief medical officer Nick Coatsworth sounded an alarm about the likely end of restrictions on September 13.

“It’s hard to see that happening,” he told Nine on Monday.

“I think the numbers need to be a lot less than they are now.”

Dr Coatsworth compared Victoria to NSW and Queensland, which are recording fewer than 10 new cases each day.

Mr Andrews has so far remained tightlipped on a broader plan for Victoria beyond the shutdown. On Sunday, he said it was still too early to announce what life would look like when restrictions are due to ease on September 13.

He insisted COVID case numbers would “explode” if restrictions were rolled back now.

The state’s next set of rules would be guided by “science and data and evidence” and would likely be in place for “many months”, he said.

The Morrison government is becoming increasingly animated in its criticisms but with federal parliament returning on Monday, it can expect to cop more uncomfortable questions itself about its mishandling of deadly outbreaks in aged care.

Polling suggests people might have cooled on the federal government over its stewardship of nursing homes and are overwhelmingly on the side of the premiers in the federal-state tussle over internal borders.

Shadow treasurer Jim Chalmers said the government was focused on blaming state counterparts instead of getting people back to work.

“It is no surprise Australians are tiring of a prime minister who chases headlines and not jobs,” he said.

The Morrison government will also move to secure boosted JobSeeker unemployment benefits until the end of this year.