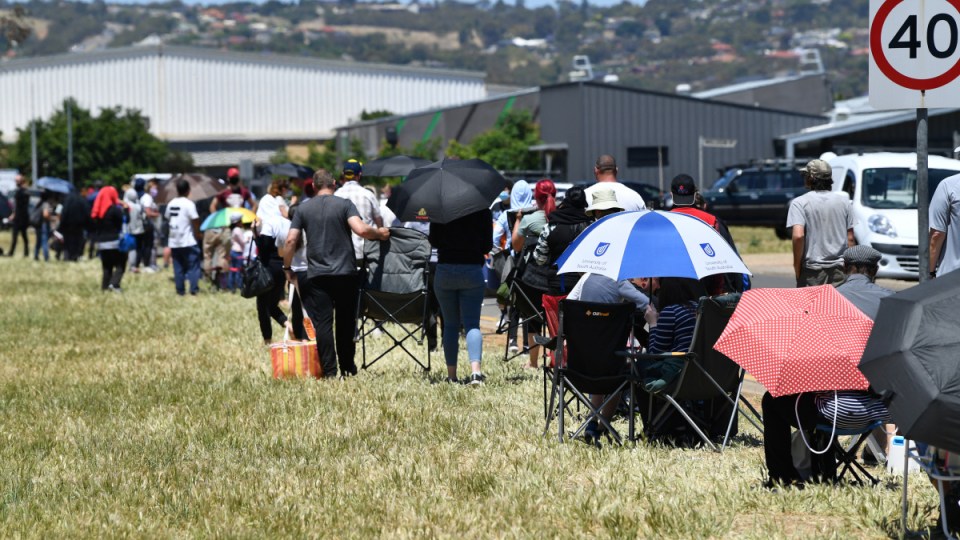 People brought chairs and umbrellas when they joined the lengthy queue at the Parafield Gardens testing site in Adelaide's north. Photo: Getty

There are also a further 14 suspected infections among close contacts, including many children.

Four of Tuesday’s new cases – including one in an aged-care worker – are linked to the outbreak. The other is still under investigation.

Professor Spurrier said about 4000 people were in quarantine as authorities worked to stamp out the outbreak.

They include a student at Roma Mitchell College in Gepps Cross, which is one of five South Australian schools to have closed.

Professor Spurrier said South Australia was in the early days of its fight against the latest cluster.

“Every single one of us need to start thinking about do we need to go out? Do we need to do that activity? And make sensible choices about that,” she said.

“People who have chronic health conditions, who are in an older age category, I urge you to stay home as much as you possibly can at the moment and get your family or other support people to do your grocery shopping and such like for you.”

SA health officials have embarked on a testing blitz, with hundreds lining up at pop-up clinics in the past two days. People queued for up to five hours on Tuesday, with some clinics turning away residents.

“This is nothing short of sensational and will be a record for South Australia,” he said.

“My heartfelt thanks to every single South Australian who heeded the calls to go out and get themselves tested.”

He said the virus had been transferred to a cleaner at a medi-hotel “via a surface” and that they believe she had infected security guards. None was symptomatic.

SA authorities confirmed on Tuesday that genomic testing had linked the outbreak to the Peppers medi-hotel.

Mr Marshall said SA was in the early stages of dealing with a “very nasty cluster”.

“We will beat the cluster at Parafield. But we must do it together,” he said.

Federal Health Minister Greg Hunt has praised the South Australian response, saying the state was unlikely to face a widespread community outbreak, but added: “We are not out of the woods yet.”

“There is more to be done, but we are in an extremely strong position,” he said.

The cluster could derail national plans to open state borders before Christmas.

All states except Western Australia have committed to easing restrictions by December 25.

But Queensland, the Northern Territory, Tasmania and WA have slammed the gates shut on South Australia.

NSW and Victoria – which has gone 18 days without new COVID infections or deaths – have increased screening for Adelaide arrivals.

This model of enhanced screening of SA arrivals was recommended by the national panel of state and federal medical experts.

“Other states may choose to go further, but they’ll have to explain that,” Mr Hunt said.

Prime Minister Scott Morrison argues the changes should only be temporary and entire states should not be locked down because of an outbreak in one location.

Dr Khorshid is concerned that once families can again get together in big groups, people will quickly forget the lessons learnt throughout the pandemic.

“We’ve just seen demonstrated very clearly in South Australia that we’re only ever one quarantine breach away from it getting back into our society,” he told the Seven Network.

“We need to make sure that we’ve got enough social distancing, enough restrictions in place, that any outbreak that does happen is small and able to be really quickly controlled.”

More Australian Defence Force troops have been sent to SA, while international flights to Adelaide are on hold to ease the burden on hotel quarantine.

WA and Commonwealth contact tracers are helping state officials to stop the cluster from growing.

The state has reintroduced restrictions, including closing gyms, recreation centres and play cafes for two weeks.

Meanwhile, repatriated Australians who were in quarantine in the Peppers Hotel have been told their isolation will be extended by up to 14 days.

Professor Spurrier said she understood they would be frustrated and keen to “get on with their lives”.

“Unfortunately, we are still working through whether it is safe for them to do so because obviously they are now in a hotel where we’ve had active cases with the staff,” she said.

Elsewhere, toilet paper limits were reimposed in Adelaide supermarkets after shelves were stripped bare as the city returned to lockdown measures it had not seen since early in the pandemic.