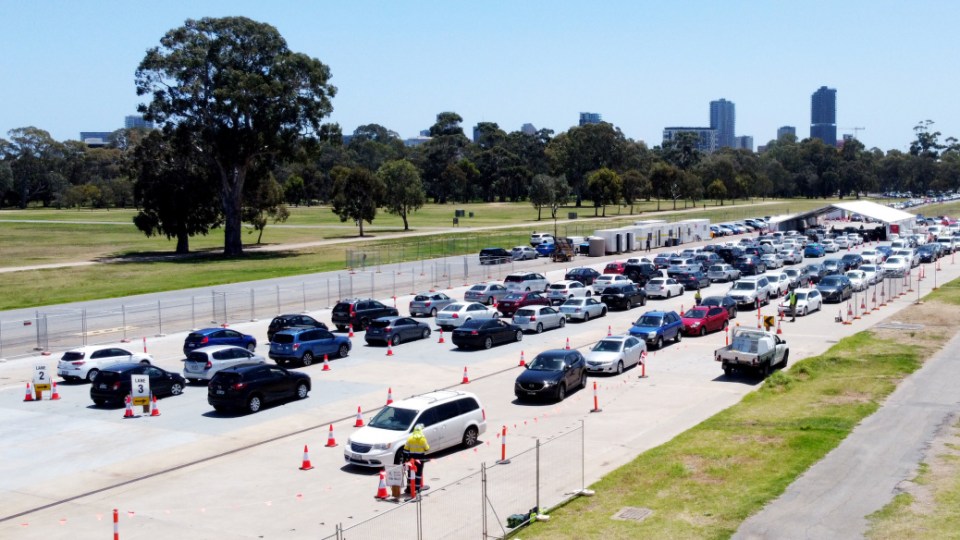 Thousands queued up at testing stations in Adelaide on Tuesday morning as the state prepared to impose restrictions. Photo: Getty

Swimmers at a public pool in Adelaide are being urged to “self-quarantine immediately” as the troubling coronavirus cluster spreads through Adelaide’s northern suburbs.

SA Health issued an alert on Tuesday at 11.20am (local time), urging anyone who attended the The Aquadome in Elizabeth on November 14 to quarantine for 14 days and seek testing.

The so-called Parafield cluster hit 20 infections on Tuesday, after thousands of people turned out to get tested on Monday.

The new diagnosis brings the number of confirmed and suspected infections associated with the cluster to 20. Infected patients range from a one-year-old to two people in their 80s and include aged care workers, a prison employee and security guards.

The apparent slow growth in the cluster was welcome on a day described as “critical” to quash the outbreak.

“Obviously we’re extremely concerned… this has come out of the blue and it’s a reminder yet again that this condition is infectious,” Australian Medical Association vice-president Chris Moy told The Australian.

“Today is going to be a critical day to actually determine whether this is something very limited or whether, to a degree, the horse has bolted and we will need to make bigger decisions.”

The outbreak is Australia’s most concerning. Victoria, which is emerging from its devastating second wave, posted its 18th day in a row without new infections on Tuesday.

NSW also had no new community infections, although there were four more cases among returned overseas travellers.

Across Adelaide on Monday, people queued for more than five hours to be tested for the virus, with some being turned away.

Queues were even longer on Tuesday, with people lining up at drive-through centres from 4am.

“Clearly, we need to have all those sites operating for longer hours going forward from today,” Dr Dodd told ABC radio.

“I apologise to anyone who queued for a long time and wasn’t able to get a test. We don’t want to have that happening.

“We need to ensure we stay open to swab all the people who present.”

Mr Marshall said he was sure Monday was a record day for testing numbers and praised South Australians for turning out.

He told Seven’s Sunrise program on Tuesday the outbreak was an extraordinary situation.

“This was a back-of-house person working in the hotel that we believe acquired it from coming into surface contact, so they never came into contact with anybody in a room,” he said.

Mr Marshall said with just one new case confirmed overnight, SA was in a different situation to to Monday, when infection numbers rose rapidly.

“We have gone hard. We’ve gone as quickly as we possibly could. We’re hopeful that we’ve got this in time,” he told Nine’s Today.

As of 4pm on Monday, SA had 34 active infections, including two people in hospital.

An official case numbers update will be released later on Tuesday.

As the state rushes to contain the outbreak, it has shut businesses –including gyms, recreation centres, trampoline and play cafes – for two weeks. Community sport and training has been cancelled, while social distancing rules and mask wearing have also been stepped up in vulnerable settings.

The South Australian government has also asked all people to work from home if they can and to reconsider unnecessary travel of any kind.

South Australia Police posted a full list of directions for public activities and residential aged care on its Facebook page.

There were also reports of worried South Australians stripping supermarket shelves bare of essentials such as toilet paper.

Elsewhere, The Ghan luxury train was apparently turned back at Alice Springs on Tuesday. The Northern Territory has declared Adelaide a coronavirus hotspot amid the latest outbreak.

One aged care home caught up in the outbreak in Adelaide’s north has confirmed two more staff members tested positive to COVID-19 on Monday, taking the total number of infected workers to four.

The home in Brompton, which is managed by Anglicare South Australia, was locked down on Monday after two nurses – a mother and daughter – were confirmed with the virus.

Anglicare SA CEO Peter Sandeman said while all the residents had so far tested negative, two more staff had subsequently tested positive and were in quarantine.

“This is the worst nightmare any aged care proprietor can face,” he told Nine’s Today Show on Tuesday.

Mr Sandeman said staff were being tested as they as they turned up to work. Residents of the facility, which houses homeless elderly people, will have more testing as soon as Wednesday.

All of the patients in the Parafield outbreak are in hotel quarantine, except for two who have been admitted to the Royal Adelaide Hospital as a precaution because of their ages.

Three staff, including two security guards, from one of Adelaide’s quarantine hotels are among those who tested positive.

Staff at all quarantine hotels will now be tested weekly.

The cluster has also shut down at least four schools in Adelaide.

A fast-food restaurant has been shut while warnings have been issued for shops and other venues and public transport services asking people to monitor for symptoms if they attended any of those locations at certain times.