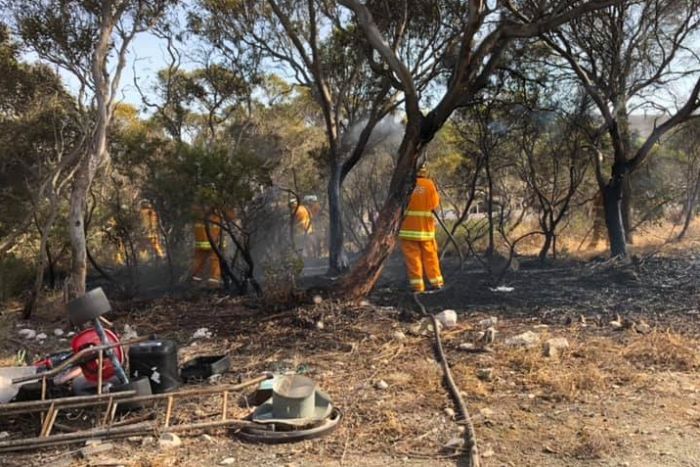 CFS officers attended a flare-up near Port Lincoln which has been extinguished. Photo: ABC

Power has been cut to more than 10,000 homes in South Australia as the state swelters through catastrophic bushfire conditions.

The city was forecast to have a top of 42 degrees on Wednesday, just below the November record of 42.7 set in 1962.

By 2.30pm the mercury had already soared to 41.4 at the Bureau of Meteorology’s Kent Town observatory.

At Edinburgh, in the city’s northern suburbs, the temperature reached 43 at the same time, while 43.9 degrees was recorded at nearby Roseworthy.

In the regions, conditions were even hotter, with Cummins on the Eyre Peninsula posting 42.9 degrees before midday.

The scorcher across SA, coupled with high winds, had SA Country Fire Service crews on standby after catastrophic conditions were declared in seven districts.

The state’s escalating fire danger came as residents of Victoria’s north and north-west were urged to leave their homes as soon as possible as the dangerous weather moved east on Thursday.

“If you live in those areas and a fire occurs, a fire will take your home,” he said

“You need to make sure you are not there. Code Red says to us that we cannot control a fire if it starts. Move out tonight.”

In South Australia, the first emergency fire warning was issued at 2pm (local time) for a blaze on the Yorke Highway, near Price.

It was quickly followed by similar warnings for fires near Angaston, in the Barossa Valley, and on the Port Wakefield Highway near Port Wakefield.

The CFS said all three fires were dangerous, uncontrolled, and conditions were continually changing.

#Bushfire Emergency Warning for #STOTT_HIGHWAY,_ANGASTON #fire. You are now in danger. Take shelter in a solid building. Do not leave or enter this area in a vehicle or on foot. #EWM ID=0003259 #SAFires https://t.co/WziRa9WslX pic.twitter.com/w95le5pgVJ

SA Power Networks said power had been turned off to Port Lincoln and the Lower Eyre Peninsula, affecting more than 10,000 homes, by early Wednesday afternoon.

“With fire conditions expected to continue well into this evening, be prepared for a potentially extended outage before it is safe to restore power supply,” its Twitter account said.

More than 120 schools had also been closed, along with a string of national parks and reserves.

“We don’t take seven catastrophic fire danger warnings lightly – that is as bad as it gets,” he said.

“That means when a fire starts it’s not possible for us to control it, so it places the community at great risk.”

The CFS had 11 fixed-wing aircraft available for firefighting, including one from NSW, but windy conditions might prevent them from flying.

We have turned off power for an estimated 10,000 customers in the Lower Eyre Peninsula due to catastrophic fire conditions. We will not be able to restore power until conditions ease and it is safe to do so. Please stay safe and keep informed. https://t.co/Zx9bRLdd63

The high winds also prompted a warning from health authorities about raised dust.

At 3pm, police said visibility was “almost down to zero” due to a large dust storm on the Sturt Highway at Truro and the Lincoln Highway between Cowell and Port Lincoln.

“High levels of dust can aggravate conditions such as asthma, emphysema, bronchitis and other respiratory diseases,” she said.

“We also know that high levels of dust can be associated with an increased risk of cardiac events such as heart attacks.”

A cool change is expected to sweep across the state early on Thursday, bringing milder conditions. Temperatures for most centres will drop to the mid-20s.

Mr Eden said while the CFS was prepared, Wednesday was expected to be tough.

“These are the worst fire conditions we’ve experienced since going back to Pinery four years ago where we lost 85,000 hectares and [had] two fatalities in that tragic accident,” he told ABC Radio Adelaide.

“For our volunteers some of them will already be at the station, many will be rostered into shifts for today and tonight.”

He said it was vital for those in bushfire-prone areas, particularly in the Adelaide Hills, to be prepared and for people to steer clear of using power tools.

“We don’t want to see tens of thousands of people driving down the South Eastern Freeway if the freeway and the Adelaide Hills is in a danger zone.

“One way to avoid that is for people who don’t need to be in the Adelaide Hills today to have already made a decision to move elsewhere.”

SA Police were also targeting fire-prone areas across the state to detect fire activity or risky behaviour, and focusing on arsonists within the community.

“We know who they are, we know where they live,” he said. “We want to make sure they are behaving themselves.”

SA Premier Steven Marshall has urged South Australians to stay safe and to check on their loved ones as often as they could.

“Today is going to be an extraordinarily hot day, it’s the potential for us to have the hottest November day in the history of South Australia,” he said.

“Our message to people is ‘play this one very safely, don’t take risks’.”