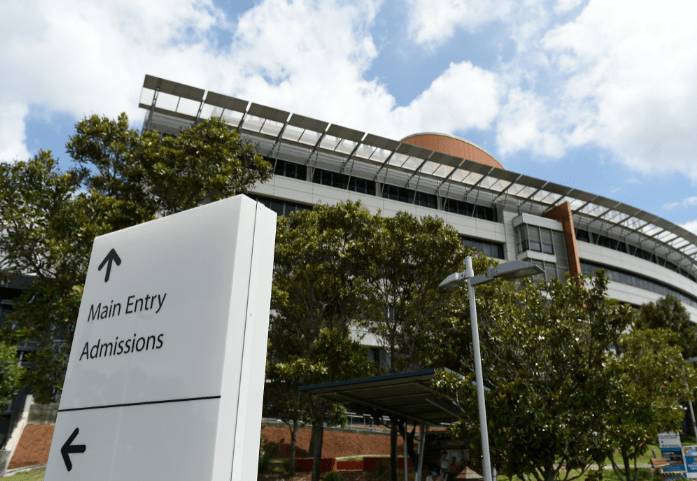 Sixty-one staff and seven patients have been tested after the doctor returned a positive result. Photo: AAP

Queensland has one new case of COVID-19, but it is likely historical and not connected to the case of a doctor at Brisbane’s Princess Alexandra Hospital who tested positive, the state’s health authorities say.

The doctor assessed two coronavirus patients on Wednesday at the Woolloongabba hospital, then tested positive late on Friday.

Brisbane’s Hotel Grand Chancellor is also in lockdown as authorities investigate whether an overseas case announced yesterday was caught in quarantine.

Sixty-one staff and seven patients at the Princess Alexandra Hospital were identified as potential close contacts and test results are expected over coming days.

“Most reassuringly, her three close contacts or associates, friends and colleagues, who were with her most of that time at the venues have tested negative,” she said.

“That’s not to say that they’re completely out of the woods — we’ll continue to monitor them while in quarantine and we also expect to get test results back from those community contacts in the next few days.”

I was planning on Marching in Brisbane On Monday.
Considering Covid developments, I’m wondering should I March in Byron or even Lismore.
Both are an easier drive l for me. Is anyone marching in Byron or Lismore?

“Genomic sequencing hasn’t quite confirmed the link — there wasn’t enough virus — but what the laboratory was able to do was what we call partially sequence [that] indicates there is a link between that healthcare worker and one of the [two] cases she assessed,” Dr Bennett said.

“Unfortunately, there was another new case that we announced yesterday and the whole genomic sequencing also indicates that case may be potentially linked to that first case — that is under review.

“They both travelled through the same area on the way and this new case from yesterday tested positive on what we call day 12 — it was their exit test and they were symptomatic.

“What we want to rule out that there’s been any transmission at all in the hotel, because it’s one of a number of possible options to explain the case identified yesterday.”

Grand Chancellor back in lockdown

Dr Bennett said the cases had been quarantining at the Hotel Grand Chancellor.

The hotel was at the centre of a cluster that sent Greater Brisbane into a three-day lockdown at the beginning of the year, after a hotel cleaner caught the disease.

“The hotel will go into lockdown, not accepting any more residents, and not discharging any return travellers for the next 72 hours, until we understand better the context of that event,” Dr Bennett said.

“It’s still only a potential event that we need to investigate.”

Dr Bennett said authorities were acting with extreme caution and there was no link to the cluster in early January.