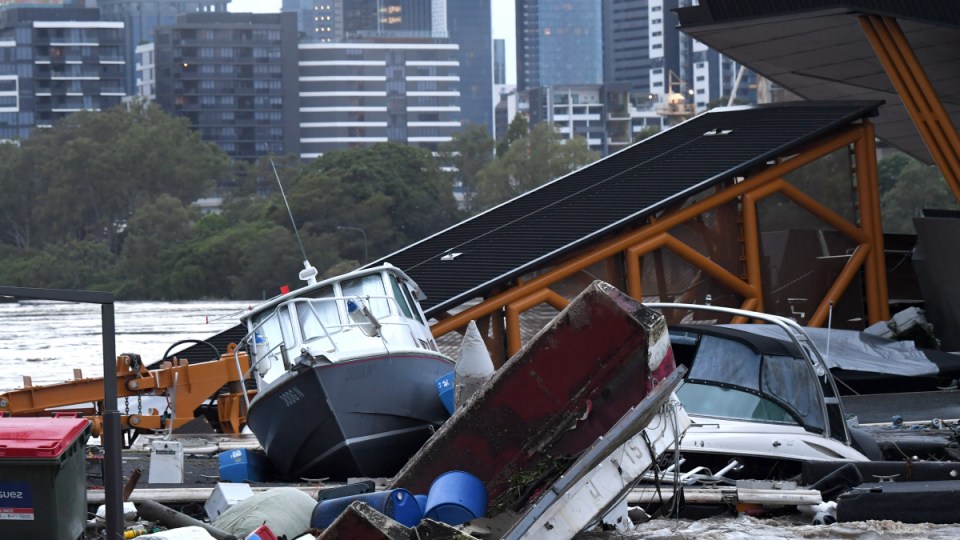 Boats and other debris are seen washed into the Milton ferry terminal in Brisbane as floodwaters kept rising on Monday. Photo: AAP

Another person has died in floodwaters in Queensland, taking the death toll to seven, and the state is bracing for more heavy rain as a week-long flood crisis continues to affect thousands of residents.

The 59-year-old Carseldine man died at Fitzgibbon, a suburb north of Brisbane, on Sunday afternoon, Queensland Police said on Monday.

He was trying to cross Cabbage Tree Creek on foot when he was swept away.

Two witnesses raised the alarm and went to his aid but despite their best efforts and those of attending paramedics he died at the scene.

Almost 1000 schools will be closed in 13 local government areas across Queensland’s south-east on Monday, and residents from Gympie to the Gold Coast have been warned to avoid all non-essential travel.

More than 1000 Brisbane homes were flooded on Sunday, with that expected to top 2000 on Monday.

Queensland Fire and Emergency Services Commissioner Greg Leach said authorities were dealing with several rescues on Monday morning, including a car that was washed into a river at Yatala.

There are also unconfirmed reports of looting in the Ipswich area. Police Commissioner Katarina Carroll said officers were investigating.

Prime Minister Scott Morrison was due to give a speech in Brisbane on Monday to the Queensland Media Club. That event has been postponed due to extensive flooding across the city.

More than 1400 homes along the river are expected to be inundated, with more heavy rain forecast and predictions the river could peak about four metres on Monday morning.

This would be near the peak seen in the 2011 floods when the river hit 4.5 metres.

Flooding was widespread on Sunday, impacting Gympie, Maryborough, Sunshine Coast, Ipswich and Brisbane, while major flood warnings were in place for the Mary River, Mooloolah, Noosa and Maroochy rivers, Upper Brisbane and Stanley rivers, Laidley, Lockyer and Warrill creeks, as well as the Bremer and Logan rivers.

Amid the crisis, water was being released from Brisbane’s Wivenhoe Dam, which was over capacity. The Moogerah Dam, inland from the Gold Coast, was also spilling, as was the Atkinson Dam.

Gold Coast residents from Tallebudgera to Currumbin have been issued a watch and act warning of “intense” rainfall and flood risk.

“This is an extraordinary weather event and it should be treated very seriously,” she said.

After smashing the south-east, the severe weather was forecast to move south to the Gold Coast, and then cross the border into NSW’s northern rivers district.

Meanwhile, the search continues for a sole sailor, aged in his 70s, who fell overboard from his vessel near the mouth of Breakfast Creek about on Saturday.

It has also made available, in partnership with the state government, one-off disaster recovery payments worth $1000 and other allowances for people who can’t get to work.

‘It means so much’: Celebrities share their abortion stories after Roe v Wade
Evacuate now! Hundreds ordered from homes as SE Queensland deluge shows no sign of ending
Today's Stories