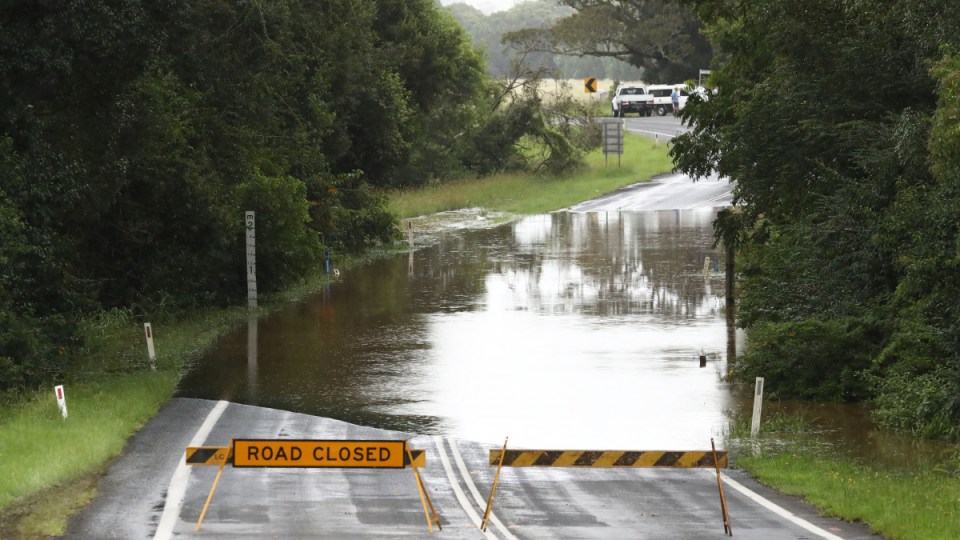 A man is believed missing in flood waters in northern NSW as rain continues to batter the state, with warnings of much more to come.

Authorities ordered thousands of people in the city of Lismore to evacuate early on Monday as the Wilson River broke its levee overnight.

The entire Lismore CBD is inundated after days of unrelenting torrential rain and the Bureau of Meteorology said the Wilson River could peak at 13.5 metres on Monday night, with the city facing its worst flooding on record.

“Flood levels are expected to exceed those seen in 2017 and may reach the 1974 flood level,” the BoM said.

The NSW emergency came as devastating floods were also hitting south-eastern Queensland. At least seven people have died, and the Brisbane River was expected to peak on Monday morning at levels near the 2011 floods.

Millions of people in Queensland were told to stay home on Monday, with more than 900 schools also closed.

Earlier, a severe weather warning was issued for the NSW northern rivers and parts of the mid-north coast and northern tablelands.

There is flooding across the region, many roads are cut and the State Emergency Service has urged people to heed warnings and avoid entering floodwaters.

Police will continue searching for the man on Monday after officers in Lismore heard him calling for help in flood waters near Brewster and Uralba streets about 4pm on Sunday.

“Police Rescue entered the water and searched the area. However, the man has not been located.”

⚠️Major #Flood Warning updated for the #WilsonsRiver at #Lismore where major flooding is likely Sunday night into Monday. River levels may reach 11.0 metres at Lismore during Monday. See https://t.co/AdztI2rqg1 for details and updates; follow advice from @NSWSES. #NSWFloods pic.twitter.com/XBJPrNypxX

The latest incident comes amid 11 flood warnings in northern NSW as the big wet which has inundated Queensland’s south-east and claimed seven lives heads down the east coast.

Premier Dominic Perrottet said an evacuation alert was in place for residents along the Clarence River near Maclean.

“We know that whilst there might be blue skies in certain parts of NSW, that does not mean that there will not be significant flooding events that occur over the course of this week,” he said.

“So please, please, do not be complacent.”

Severe weather was affecting a 450-kilometre stretch from the Queensland border to Port Macquarie with a risk of life-threatening flash flooding, the Bureau of Meteorology said.

The northern rivers and mid north coast regions were expected to have “widespread, high rainfall totals” exceeding 150 millimetres on Sunday.

NSW Emergency Services Minister Steph Cooke said there were 550 SES volunteers in the field and back-up plans in place.

“The SES is well supported by our other emergency services, organisations, including the RFS, where we have pre-positioned aircraft up on the far north coast,” she said.

“They’re able to respond to any incidents that arise up there. We also have fire and rescue, with both teams and appliances in the north of the state, again ready to respond the risk of flash flooding, heavy rainfall.”

Senior Bureau of Meteorology hydrologist Ailsa Schofield said there was the potential, as the monster system moves south, for up to 250 millimetres of rain in some areas.

“We won’t start to see the rainfall ease until tomorrow (Monday),” she said.

“What this means for communities is that there is very serious and life-threatening flash flooding and riverine flooding likely.

“We have a number of flood warnings current from minor, moderate and up to major flooding.”

There five catchments affected are the Tweed, Wilsons, Richmond, Clarence and Arara rivers.

The communities of Tombolgin, Lismore, Grafton, Coots Crossing, Kyogle and Coraki have major flood warnings forecast from Sunday or for Monday.

Ms Schofield said it was possible the system could reach southern NSW by Wednesday.

One NSW life has already been claimed, with a man killed when his LandCruiser was carried away by local flood waters on the Central Coast, north of Sydney, on Friday.

Meanwhile, communities affected by severe storms and floods across NSW in February and March last year will receive an additional $200 million in a jointly funded commonwealth-state support package.

Tom Richardson: The lost art of patience and the joy of a mixtape
COVID claims a total of 24 more lives in NSW and Victoria
Today's Stories