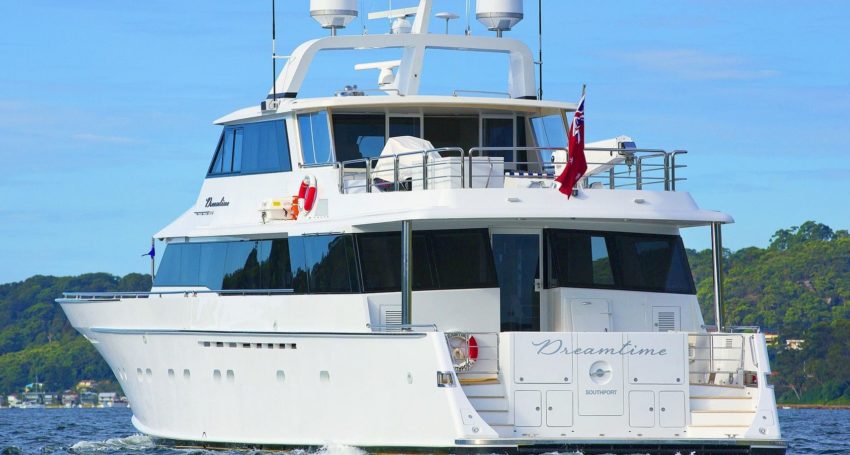 The luxury yacht, Dreamtime, costs about $70,000 a week to charter.

Police, water police and maritime safety officials will launch a water border blitz on boat arrivals into Queensland after four men fled COVID-locked Sydney on a luxury superyacht and snuck into the Gold Coast so they could catch the Wallabies Test match in Brisbane.

Patrols of Gold Coast waterways and checks on boaties berthing at Southport are being stepped up to stop the leak in people flouting lockdown and border arrival restrictions and slinking in by sea.

Maritime Safety Queensland general manager Angus Mitchell said the group who arrived on the 34-metre superyacht at Southport before heading up the motorway to watch the Wallabies’ Test against France at Suncorp Stadium on Wednesday were among a host of border crossers trying to breach Queensland’s entry restrictions by water.

“Several boaties have been intercepted and fined, placed in hotel quarantine or turned back in recent weeks in an expensive reminder of their responsibilities,” Mr Mitchell said.

“Action has been taken against those two vessels as well,” Chief Superintendent Wildman said.

He said MSQ and water police were monitoring the Gold Coast seaway and the berths at Southport.

“By constantly monitoring traffic that comes in through this way we aim to pick up any of these people who do try and flout the laws,” Chief Superintendent Wildman said.

“We will be maintaining a heavy presence on the waterways entrances to Queensland, as well as by road and by air.”

Chief Superintendent Wildman said the four men arrived on the superyacht Dreamtime, which costs about $70,000 a week to charter, on July 7.

They were found to have arrived from Sydney’s northern beaches, a declared hotspot, after police became suspicious of the crew and obtained CCTV footage from their origin point in Sydney.

The four people, 44-year-old superyacht owner, his 59-year-old personal assistant, the superyacht’s 54-year-old captain and a 55-year-old engineer, have each been fined $4000 and are in hotel quarantine.

“Once they berthed at Southport they did travel to Brisbane supposedly to see a Wallabies Test match,” Chief Superintendent Wildman said.

“It is extremely disappointing, but once again this is four individuals out of 600,000 people on the Gold Coast. These people are visitors, and it only takes one to put us all at risk.

With another rugby union international on Tuesday in Brisbane, the third rugby league State of Origin game on Wednesday on the Gold Coast, and the remainder of the NRL season being relocated to Queensland, Premier Annastacia Palaszczuk has again faced questions about the risks.

Her government has been quick to host any new sporting events, to boost Queensland’s tourism and hospitality sector, and the Premier questioned the alternative on Tuesday.

“What’s going to happen, no competition? I don’t think the public would like that,” she said.

“There’s no special rules for people, we are trying to treat people in the best way we possibly can,” she said.

“Have a look at Queensland – so far Queensland’s going OK, all right, but anything can change any day. And if you don’t think that’s stressful come and take a walk in my shoes.”

This article first appeared in InQueensland