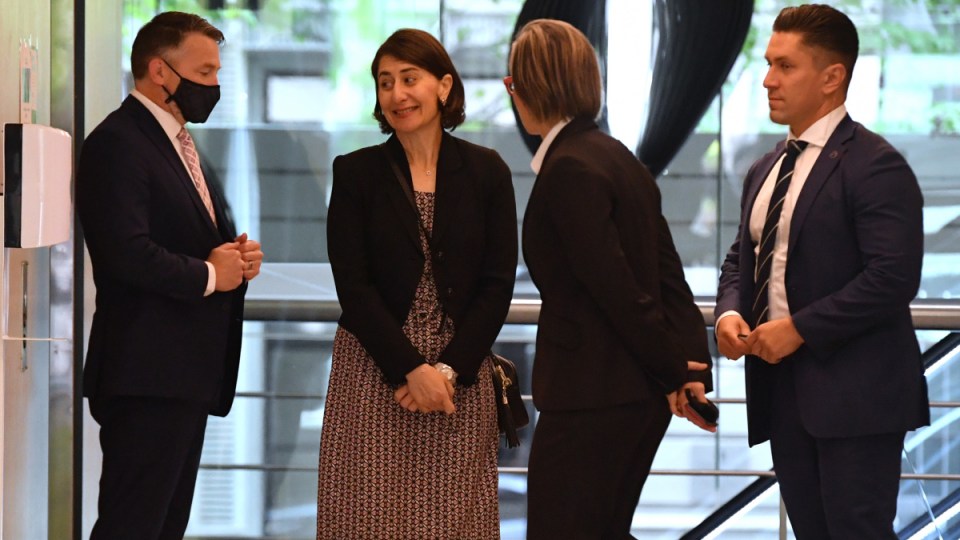 Former premier Gladys Berejiklian has appeared at the ICAC for her second day in the witness box. Photo: AAP

When her secret boyfriend told her to get a second phone and an encrypted messaging service that “leaves no trace” days after he was called before the state’s corruption watchdog, Gladys Berejiklian says it could have been for privacy reasons.

In her second day in the Independent Commission Against Corruption (ICAC) witness box, the former NSW premier was shown a series of July 2018 text messages between her and disgraced former Wagga Wagga MP Daryl Maguire.

He told Ms Berejiklian to download instant messaging service WeChat and get a “private phone”.

“They can read texts but not the little green man, it leaves no trace,” he wrote.

Ms Berejiklian said she didn’t know if “they” referred to ICAC or whether the “little green man” referred to the app’s green icon.

“I had no inclination to think that it was because he had done anything wrong,” she said.

Ms Berejiklian said she never did buy a second phone.

The inquiry is investigating whether her secret relationship may have affected the way she dealt with projects Mr Maguire was pursuing.

The former premier was asked by counsel assisting the commission Scott Robertson about a tapped phone call in July 2018 in which Mr Maguire told her he had been summonsed to appear as a witness at the ICAC.

Ms Berejiklian agreed it was in “black and white” in the transcript that Mr Maguire had made representations to property developers but she didn’t know all the people he mentioned.

“Whether or not I listened or cared is another matter,” Ms Berejiklian said on Monday.

“I did not assume any wrongdoing.”

In the tapped phone call, Mr Maguire told her he had introduced a former councillor to Chinese property development company Country Garden.

He maintained he had never “accepted a dollar” nor “done a deal” and Ms Berejiklian told him to “be honest and listen to your lawyer”.

Ms Berejiklian said she trusted Mr Maguire even after he was summonsed.

“I had no reason to disbelieve him when I pressed him a number of times and he said he’d done nothing wrong,” she said.

NSW ministers are required under the ICAC Act to report suspicions of corrupt conduct to the commission.

Ms Berejiklian said she didn’t think there was anything she needed to report.

Former chief of staff to the former premier Sarah Cruickshank gave evidence to the state’s corruption watchdog last week that her former boss told her in July 2018 – a day after Mr Maguire gave evidence to ICAC – the relationship had ended.

Ms Berejiklian disputed this on Monday.

“I don’t think it is uncommon for two people to have a different recollection of a conversation that occurred three-and-a-half years ago,” she said.

Ms Cruickshank advised her to “stop having anything more to do with” Mr Maguire.

“I did not take that advice obviously,” she said.

She was asked again about an intercepted phone call in which she can be heard saying she got “$170 million in five minutes” for a hospital in Mr Maguire’s electorate but said that money had already been allocated.

“I am a stickler for making sure everything is done by the book,” she said.

The call was one of several intercepted phone calls played to Ms Berejiklian during five hours of questioning on Friday.

She was asked about a phone call, played on Friday and again on Monday, in which Mr Maguire told her to “throw money at Wagga” and she said she would.

She said governments “threw money at seats in order to keep them” in a by-election.

After her evidence concluded Ms Berejiklian addressed reporters outside the commission’s Sydney headquarters and said that every decision she made was in the public’s best interest.

“Now I intend to get on with my life.”

‘I did not assume any wrongdoing’: Gladys