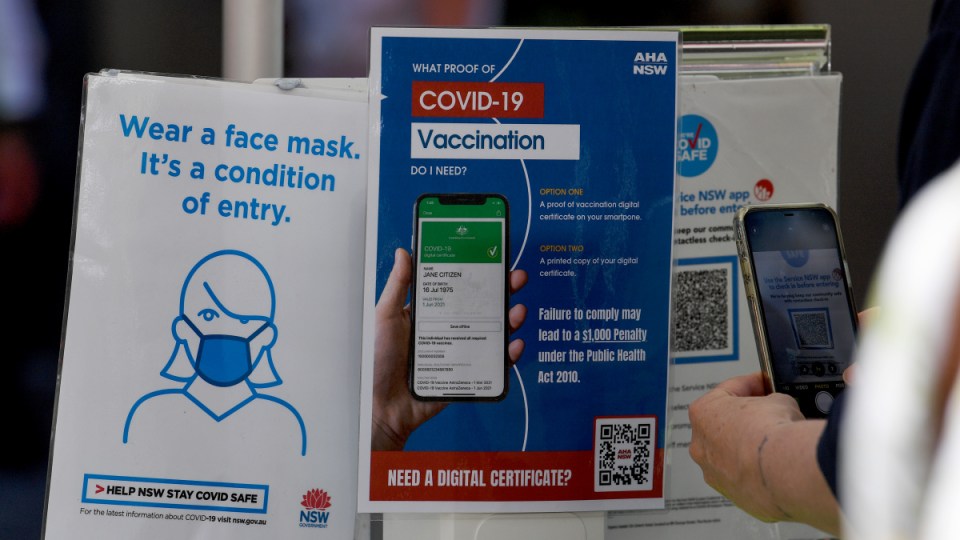 Checking in to venues using a QR code could soon be a thing of the past in NSW. Photo: AAP

People in NSW using the government’s app to check-in to venues will start receiving notifications if they have visited the same place as a confirmed COVID case.

The Service NSW app already shows red alert stickers in the check-in history of the app.

From Friday, however, push notifications will be added to let users know they might have been at a venue with a confirmed case and should monitor for symptoms.

The notifications are not an order to isolate and will not designate what kind of contact users might have had with the confirmed case.

NSW Customer Service Minister Victor Dominello agreed it would have been better to have the notifications a year ago. However, “the reality is that it had to be built and prioritised”.

Asked whether he still thought QR codes should be retired once the state reached a high vaccination rate, Mr Dominello said it was important to maintain trust in the government.

QR codes could be made voluntary or retired completely but would still be required in some high-risk environments such as nursing homes and retirement villages, he said.

A decision on QR codes would be made “subject to health advice of what the saturation point is” for vaccinations, when the minister said the community would return to an “understandable default position of very low compliance” with the check-in procedures.

“If there are low-risk settings in the community, and health advises, then it’s absolutely the right thing to do to retire the QR codes,” Mr Dominello said.

“That way if you do need to turn them back on, hypothetically, if there is a new risk that we did not foresee, then the community will trust us.”

Retiring QR codes at high vaccination rates would build trust in the government and communicate to people “this is a proportionate government” doing things “as required … not because (the government) loves forcing [people] to do things”, he said.