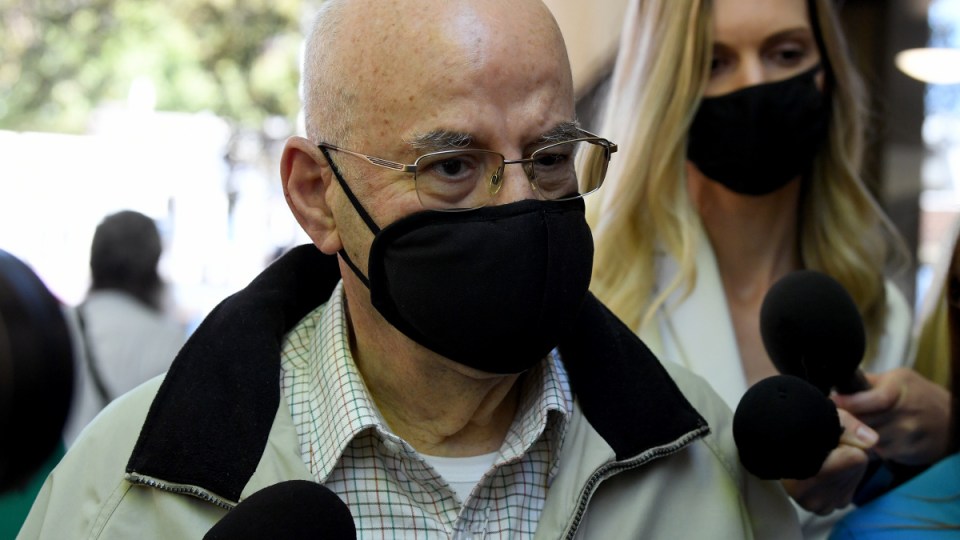 Ex-NSW Labor minister Eddie Obeid (centre) has had his bail revoked after being sentenced to jail. Photo: AAP

Former NSW Labor minister Eddie Obeid has failed to secure bail while awaiting an appeal after being given a jail sentence over a rigged tender for a coal exploration licence.

The 77-year-old was allowed to stay overnight at his Sydney home after his bail application was granted to be heard due to the risk of his catching COVID-19 at Surry Hills police station.

But on Friday Justice Elizabeth Fullerton ordered he be directly transported to Silverwater jail at 10am on Saturday after rejecting his bail application for continued release.

The judge said earlier in the day that if Obeid was unsuccessful in securing bail, the consequences “will present an obvious obstacle filing a further application”.

“An adverse ruling on that question may present difficulties for your client if he does wish to agitate for conditional release pending (his appeal) next year,” Justice Fullerton told his lawyer in the NSW Supreme Court.

The judge ultimately found she was not satisfied that special or exceptional circumstances would justify granting his continued release.

The court was told that 83 per cent of NSW prison inmates had received their first COVID vaccination, while 65.6 per cent were fully vaccinated – a number that had almost doubled since mid-September.

They were both taken into custody.

In July, the judge found all three guilty of conspiring for Macdonald to engage in misconduct as a minister between 2007 and 2009.

The then resources minister was found to have breached his duties by providing confidential information to the Obeids about a coal exploration licence that delivered a $30 million windfall to their family.

In jailing the trio, Justice Fullerton found the objective seriousness of the conspiracy “was one of the highest order”.

She said father and son were aware of Macdonald’s actions in establishing and granting the licence over the Obeids’ family property at Mount Penny, in the Bylong Valley near Mudgee, for the family’s financial benefit.

“Edward Obeid and Moses Obeid were patently motivated by a desire to maximise the financial benefit to them and their family in exploiting the value of the coal underlying Cherrydale Park,” she said.