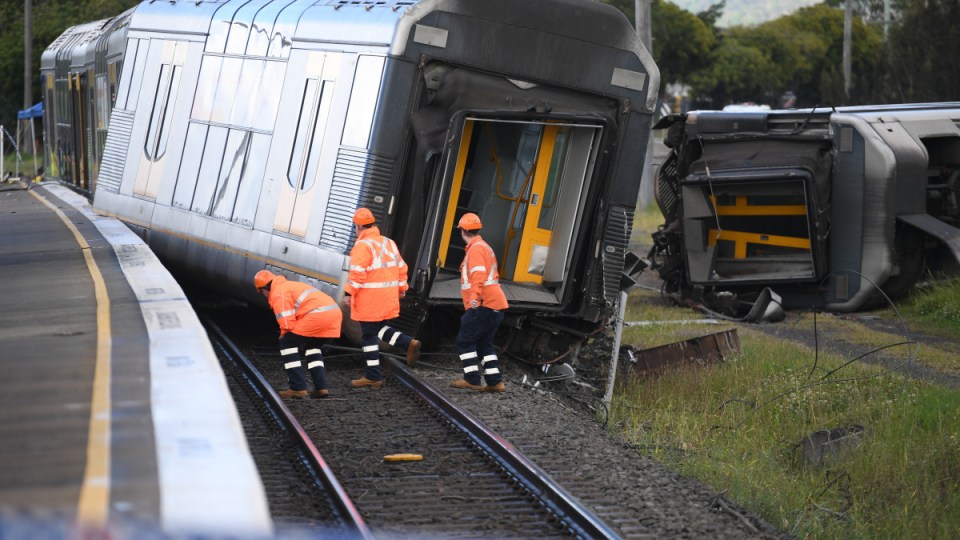 Police fear sabotage or misadventure were behind an early morning crash and derailment of a Sydney-bound commuter train near Wollongong in NSW that trapped the driver and injured three others.

The impact caused the first carriage of the four-car train to catapult off the tracks and land on its side metres from Kembla Grange station on the South Coast Line about 4am.

A crime scene has been established and Superintendent Craig Ireland said police were trying to establish how and why the Nissan van came to be on the tracks.

“A man was seen running from the scene just prior to the collision and he is certainly a focus of the investigation. We would like that person to come forward,” Superintendent Ireland said.

“It doesn’t appear to be a case of a simple breakdown.

“The fact that someone has run from the scene prior to it indicates that it’s either deliberate or some sort of misadventure driving the car in that area on the tracks.”

The impact destroyed the van, brought down power lines and the remaining carriages were left leaning against the station’s platform.

The shocked driver has back injuries after being trapped in the wreckage. He was extricated by rescue workers and taken to hospital.

Superintendent Ireland said it could have been “a whole lot worse” and rail workers said the wreck of the severed train had initially made them think there would be deaths.

“When they see a train in that position, they immediately expect fatalities,” he said.

Twelve passengers were on the train, with two taken to hospital with minor injuries, along with the guard.

The train wasn’t scheduled to stop at the station so it “it would have been travelling at speed,” Superintendent Ireland said.

“My understanding is the injuries are not severe, which is a bit of a miracle.

The crash happened on the same day the NSW rail network was already crippled by a strike affecting up to 70 per cent of the city’s trains.

Rail Tram and Bus Union NSW secretary Alex Claassens said the crash would have been a horrific experience for rail staff and passengers.

“Incidents like this highlight just how tough a job working on our trains can be.

“It is so important to have trained professionals on our trains at all times to help provide support and assistance to passengers.”

Sydney Trains and NSW TrainLink said the crash inflicted substantial damage to the overhead wiring and associated infrastructure, which is likely to have impacts on services for at least a day.

‘Miracle’ no one killed in NSW train derailment