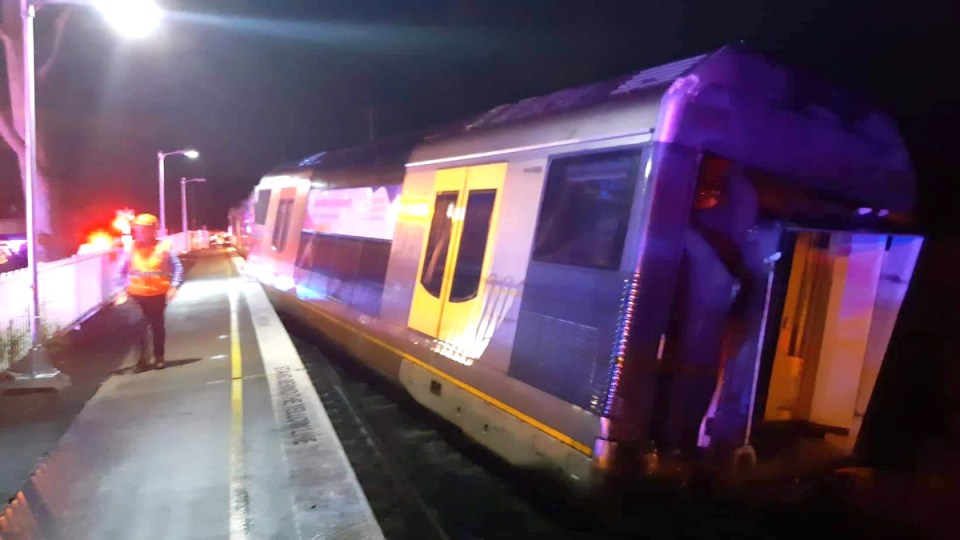 Four people were injured in the derailment at Kembla Grange on Wednesday morning. Photo: FRNSW

Four people, including a train driver, have been taken to hospital and NSW Police have opened a crime scene after a rail derailment near Wollongong early on Wednesday.

The crash happened on the same day the NSW rail network is already crippled by a strike affecting up to 70 per cent of the city’s trains.

Fire and Rescue NSW was called to the derailment near West Dapto Road at Kembla Grange about 4.15am.

They found a four-carriage Sydney-bound train had hit an abandoned car, with one carriage totally detached and on its side. The train, which was carrying 10 passengers and a driver, landed on the side behind the Kembla Grange railway station.

The driver remained stuck in the train for more than an hour.

“Firefighters used extreme caution due to the potential live high-voltage electricity both above and below the train,” FRNSW said in a statement.

“Crews used special rescue equipment to extricate the 40-year-old train driver, who was suffering from back pain.”

He and the injured passengers had minor injuries and were taken to Wollongong Hospital in stable conditions.

A man called Nick who was on the train on his way to Sydney has told radio 2GB he was lucky not to have been injured.

“It was like being on a trampoline. [We were] just bouncing up and down,” he said.

Police established a crime scene and are investigating, with help from Sydney Trains and NSW TrainLink.

“We are working closely with NSW Police who have established a crime scene, and emergency services who are on site,” a spokesman said.

“Thankfully there haven’t been any serious injuries.

The crash has inflicted substantial damage to the overhead wiring and associated infrastructure, which is likely to have impacts on services for the day.

Commuters are advised to change trains at Wollongong or Albion Park to complete their journey.