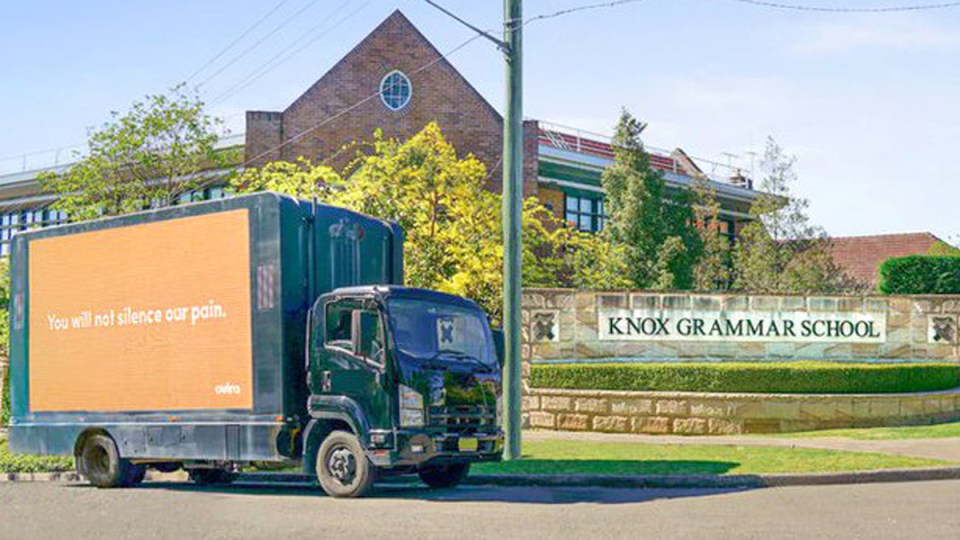 A judge’s remark that a man spared conviction for punching a woman will “thank your lucky stars” is the centre of a new anti-violence campaign.

The NSW District Court in September spared a former private school student a conviction for drunkenly punching two people on a night out last year.

Nicholas Drummond, who received a 14-month good behaviour bond, had called one victim a slut and told her to “put your tits away”, leading her to repeatedly confront him.

After community outrage at the decision, edited phrases from the judge’s remarks were driven around Sydney’s Downing Centre District Court on Tuesday on mobile billboards.

One says “thank your lucky stars” and another says “he’s had an unhappy year”.

A third states “her dress may have been perceived as provocative”, leaning on the judge’s observation about what a former Knox Grammar student may have perceived about the woman’s appearance.

Women’s health company Ovira is leading the campaign after its placing of a billboard outside Knox Grammar last week went viral.

Ovira founder Alice Williams said she wanted to use the moment to shine a light on the work of support services and send a message to survivors that they were not alone and support was always available.

“Our goal now is to make it clear that as a community, we have an urgent responsibility to demand sweeping reforms in the judicial processes and criminal justice system so we can create a safer future for women,” she said.

R&DVSA said it was supportive of young women standing up and speaking out about violence against women.

“The justice system is not fit for purpose,” chief executive Hayley Foster said.

“This sort of decision sends a very dangerous message to the community and a very permissive message to those who choose to use domestic and sexual violence and victim-blaming.”

Mel Thomas, whose KYUP! Project works with experts to teach school students about consent and the impacts of violence, said she was passionate about breaking the cycle of violence at the grassroots.

“I feel this campaign is to the point and it’s not about criticism, it’s about the pain of victims,” she said,

The Director of Public Prosecutions is considering whether to appeal Judge Sutherland’s decision.

Judge Sutherland found the junior soccer coach was remorseful, acted out of character and had suffered a difficult year due to his father’s illness, his dog’s death and a relationship breakdown.

He also heard a suggestion that Drummond was so overcome emotionally after punching the woman that he’d threatened to jump off a car park.

“You should thank your siblings for the way they assisted you on the night. I’ve got no doubt that you will thank your mother and thank your lucky stars, and keep your nose clean, young man, and good luck with the coaching when you are allowed to get back to it,” the judge told Drummond.