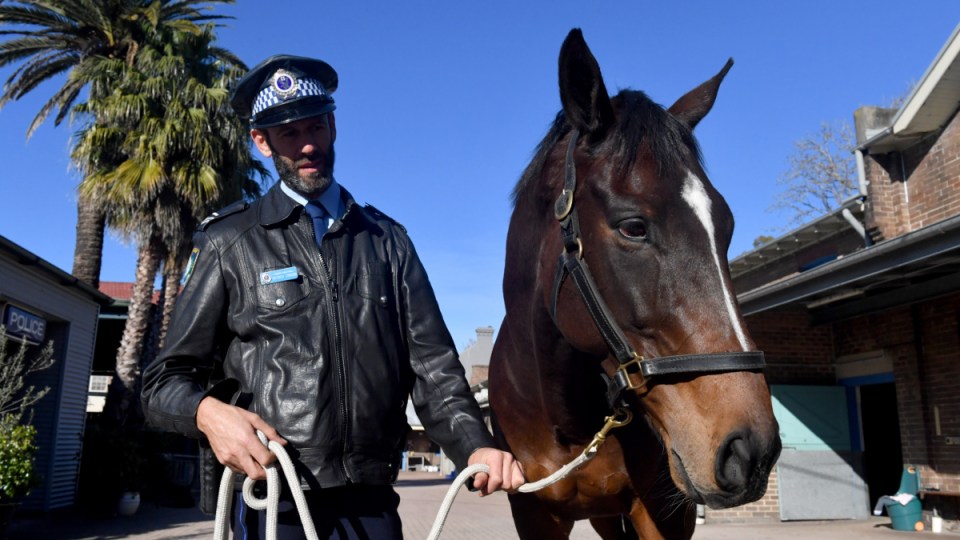 An alleged Sydney anti-lockdown protester accused of striking police horse Tobruk has been unable to speak with his lawyer, a court was told.

The Surry Hills man allegedly struck a police horse, a statement read, and he faces four charges for affray, animal cruelty, joining an unlawful assembly and failing to comply with a COVID-19 direction.

“[The accused] did use unlawful violence towards NSW Police Horse Tobruk by conduct such that a person of reasonable firmness if present at the scene would have feared for their safety,” court documents say.

Saturday’s rally moved from Sydney’s Victoria Park to Town Hall where an unmasked crowd broke through a police barrier and continued down George St.

Lawyer Tony Nikolic said it was of great concern that he had been unable to speak with the accused while held in custody before his scheduled Sydney court appearance on Tuesday.

A court officer confirmed Mr Pulkownik’s case had been set down for the day but was “unavailable” for his appearance via AVL into the court.

“We’ve made a number of attempts with corrective [services], we knew he was at Surry Hills cells. What was most unfortunate they were giving us absolutely no information, actually hung up on us,” Mr Nikolic said outside court.

“We found that quite astounding given the gravity of the alleged offending.

“The fact that a lawyer can’t get access to a client at the behest of his mother’s request, his mother is worried sick – she has a heart condition … that’s not only a concern for justice in Australia but also human rights.”

Greater Sydney has been locked down for four weeks, with residents able to leave home only with a reasonable excuse.

The lawyer sought orders allowing for immediate telephone contact with Mr Pulkownik before his next appearance on Thursday, where he is expected to apply for bail.