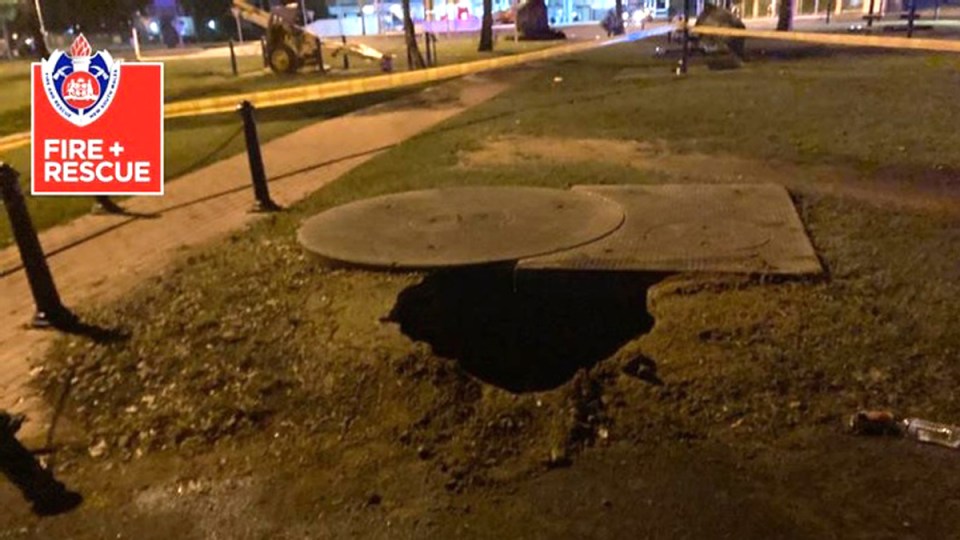 Three people were trapped in this sinkhole when riverbanks in Moree collapsed late on Wednesday. Photo: Fire and Rescue NSW

Rescue authorities say three people are lucky to be alive after a sinkhole opened up beneath them as they watched floodwaters in the central NSW town of Moree.

The trio, two men and a woman, were initially trapped when the land on the banks of the flooded Mehi River gave way beneath their feet shortly before midnight on Wednesday.

Nearby Fire and Rescue NSW crews were on the scene quickly after hearing the group’s cries for help.

“They discovered three people were trapped in the sinkhole and immediately got to work utilising land-based flood rescue gear,” Fire and Rescue said.

“One man was able to climb out of the sinkhole, while firefighters safely rescued the remaining two people, a man and a woman.

“They were all lucky to escape injury.”

Narrabri Crew Leader Jason Anderson said the trio were lucky not to have been killed, and reiterated that people should not venture into or near swollen rivers or floodwater because conditions could change rapidly.

Elsewhere, the devastated mother of a Queensland man found dead in a flooded creek says she wishes she was dead instead.

Suzy Allington is mourning the death of David Hornman, whose body was found in his submerged ute in the swollen Canungra Creek, inland from the Gold Coast, on Wednesday.

Swift water rescue crews and police divers fought strong currents to retrieve the vehicle with the body of the 38-year-old husband and father still inside.

Police investigations are centred on whether he crossed a flooded causeway across the creek.

In a heart-wrenching post on Facebook on Wednesday night, Ms Allington expressed gratitude to those who had offered their sympathy and support.

“Thank you for all your messages – I wish God had taken me instead – RIP my beautiful son – you were the BEST xxxx,” she wrote.

That was the day flash flooding hit the region, with the Gold Coast hinterland copping almost half a metre of rain from Sunday until the deluge stopped on Wednesday.

“Police are interested in obtaining vision of the weather conditions in the area particularly near Coburg Road causeway between 5am and 7am on March 22 as well as any vision capturing a white Isuzu utility heading down Coburg Road towards Canungra within those times,” detectives said on Thursday.

Officers are preparing a report for the coroner.

The flood emergency in Australia’s east has also claimed another life.

A Pakistani national on his first day of a new contracting job died after his car was trapped in flood waters at Glenorie, north-west of Sydney, on Wednesday morning. His name has not been publicly released.

Help is continuing to flow to the flood-affected communities, where thousands of residents remain cut off, while some are starting to assess the damage.

Long-term Windsor resident Lisa Williams hadn’t expected her home to flood. She said it started on Sunday and had not yet stopped.

“We’ve been here 30 years and we’ve never seen anything like this,” an emotional Mrs Williams said.

The bottom storey of her three-bedroom home, two blocks from Windsor’s main street, is entirely under water, and so is the garage.

“We’ve had snakes, we’ve had to keep the front doors and the back doors closed.”

While her builder husband was able to salvage some of his tools, the family has lost many possessions.

Mrs Williams said the clean-up would be huge, but they won’t start yet as “there’s no point, there’s still water coming”.

The Hawkesbury River is still rising in places.

More than 100 rescues have been carried out by the State Emergency service in the Windsor region, north-west of Sydney, and further north since the flooding disaster began to unfold on Friday.

Catholic Priest John Rizzo was one of those helped.

He had to be taken by boat by SES volunteers back to Windsor after getting stuck at Kurrajong near Richmond where he’d been visiting a sick heart patient.

Father Rizzo said it had been quite “scary” witnessing the damage.

At Windsor crews have worked for days delivering vital supplies to supermarkets at Wilberforce and North Richmond.

On Wednesday, blood supplies were also taken across the river by boat to a patient in need.

Further north at Wisemans River the river continues to rise. Emergency crews have been working around the clock to get to people in need.

“SES crews are still getting callouts to the lower Hawkesbury, including Wisemans Ferry. Although most residents in that area have shown great resilience and are extremely prepared, we urge them to call us if they need help with the river rising,” an SES spokesperson said.

It will be days before it the flooded Hawkesbury River recedes.

“I have spoken to many people that have had to leave their homes and can’t get back, others are isolated where they are, lots of devastating stories,” Mr Connolly said.

“I’ve also been inundated with offers to help and I’m proud of the resilience and kindness our community has shown yet again, after dealing with fire and flood just last year.”

Trio lucky to be alive after riverside sinkhole opens up