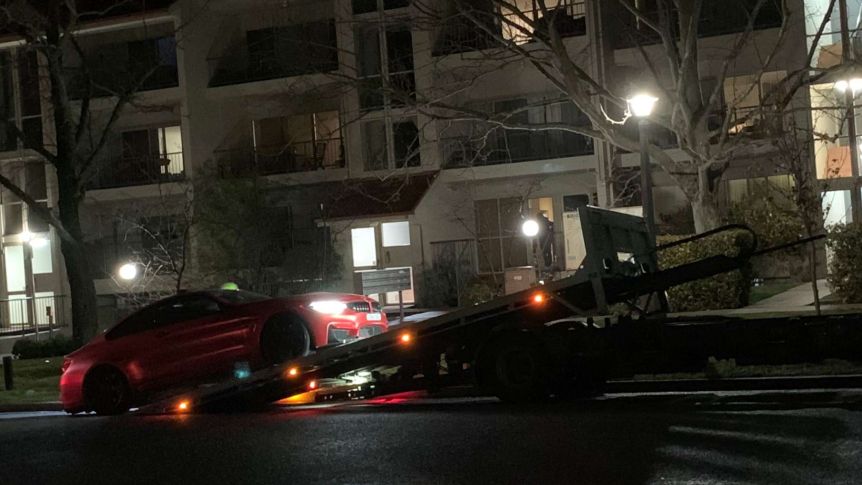 A luxury BMW was among the items seized in raids following the arrest of the Nomads national president. Photo: ABC News/Stephanie Borys

The national president of the Nomads outlaw motorcycle gang has been arrested in Canberra after allegedly supplying firearms that were used in three shootings on the NSW South Coast in December last year.

In a major operation, police yesterday arrested the 34-year-old man in Garran, in Canberra’s south, before raiding two properties in Kingston and Kambah.

Two cars were seized, as well as a firearm, illicit drugs, jewellery and bikie paraphernalia, including patches.

The man was taken to the ACT Watch House, to be extradited to NSW later today.

“With the arrest of this Nomads national president, the influence of this club within Canberra is now extremely limited,” he said.

“Outlaw criminal gangs should know Australian and international police agencies work collaboratively on these investigations, and state and international borders will not inhibit our ability to pursue these criminals.”

The arrest is the latest in an “extensive” investigation between Taskforce Nemesis, the ACT anti-bikie squad, and NSW’s Strike Force Essendene, which was established to investigate the 2019 South Coast shootings.

On December 1 and 2 last year, police were called to two homes in Batehaven and Nelligen after shots were fired into houses.

Soon after, police reported an incident on the Princes Highway just south of Batemans Bay where three men with firearms approached another three men, before a fight broke out and three of the men were hospitalised.

Ten people have been placed before the courts and 49 charges laid as a result of the investigation.

NSW Criminal Groups Squad Commander, Detective Superintendent Robert Critchlow, said their work “will continue … across the country to ensure those who endanger lives through their illegal behaviour are put before the courts and held accountable”.

“If you wish to jeopardise the safety of the community … it is only a matter of time before we find you, no matter where you choose to hide,” he said.