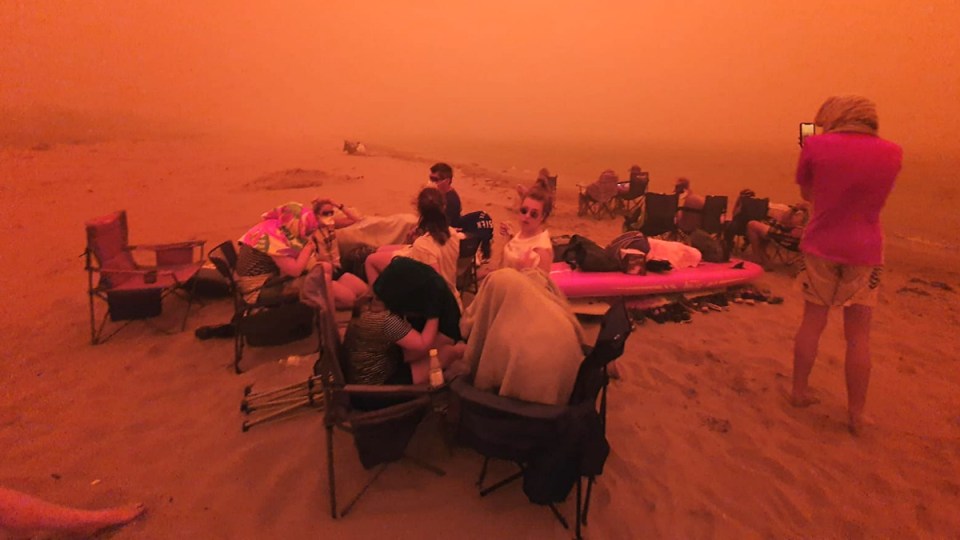 The body of a man fleeing the NSW south-coast fires has been found in a burnt-out car near Yatte Yattah near Lake Conjola this morning.

It is the fourth fatality in NSW after a father and son were confirmed dead in Cobargo on New Years Eve and the RFS confirmed the identity of firefighter who died when his truck rolled in a freak firestorm.

Another man who decided to stay and defend his property is still missing as authorities try and gain access to remote areas where there are concerns of injuries including burns.

In the nation’s capital, huge smoke clouds have forced hundreds of residents to wear face masks in Canberra where the air quality was the worst in the world at 9:30 am according to international air quality index, pipping New Delhi as the worst of the worst.

Australians evacuated from land in the path of deadly bushfires still burning on Wednesday are spending the first hours of 2020 awaiting news of whether they still have homes to return to.

At least one family is facing an even more anxious wait, with a 72-year-old man still missing north of Cobargo in NSW.

It comes after a father and son were confirmed dead on New Year’s Eve after fire took hold of their property near the small village. Patrick and Robert Salway were trying to save their farm when the blaze tore through the town.

In NSW, fire conditions are expected to ease on Wednesday after a cool change – which brought brought gusts of up to 80km/h and dry lightning strikes – crossed the state.

Before 7am Wednesday no fires were at emergency warning level in NSW, but eight – including the 230,000-hectare Currowan blaze on the south coast and the 64,000ha Clyde Mountain fire ringing Batemans Bay –were at watch and act level.

By 8am, emergency warnings were still in place for fires burning in East Gippsland in Victoria.

Thousands of families were left without power, phone lines or clean water on the NSW south coast after the terrifying bushfires continued their path of destruction through the region on Tuesday.

The deaths of the father and son at Cobargo follow Tuesday morning’s confirmation that a newlywed firefighter who was expecting his first child had also died in a freak ‘firestorm’ that flipped his truck.

“We can say certainly that the two men at Cobargo are residents of Cobargo,” Ms Berejiklian said. “A father and son, we believe. Very tragic set of circumstances. Obviously trying to their best with the fire as it came through in the early hours of the morning.

“The other person that we are trying to get to, west of Narooma, we think that person as well was caught up, trying to defend their property in the early hours of the morning.”

Tourists and residents huddled on the beaches in Bateman’s Bay and Bermagui and other south coast towns as choking smoke blanketed the region. Some families huddled in swimming pools for safety.

Reports NSW Liberal minister Andrew Constance was unaccounted for were quickly dispelled after an ABC journalist contacted the MP by phone.

In a day of devastation, the historic village of Cobargo was largely destroyed after fires raged in the town from 5.30am on Tuesday.

As residents attempted to flee in cars in the early hours, desperate NSW Rural Fire Service volunteers raised fears they were headed into the fire front. They said flames had crossed the highway and were impacting on houses in the town.

Before, during and after. Main Street of Cobargo in Bega shire hit hard by bushfire. There are people unaccounted for in the small township. #NSWfires #AustralianFires pic.twitter.com/vZTP2qkcAi

Less than an hour later, there were RFS reports of terrified Quamma residents sheltering in the Bega Valley town’s fire station for protection from the “very intense” fires.

“We are defending life only at this stage,’’ an RFS volunteer warned, adding they would not be able to defend all homes in the township.

By 7am, the RFS was working to evacuate multiple children from a house on fire in the town. A volunteer ordered an ambulance, explaining “the kids have no shoes”, and were burning their feet on the road.

There were also grave concerns for animals at Mogo Zoo on the NSW South Coast, with staff desperately trying to protect and evacuate animals.

“We have still have a lot of spot fires … it felt like Armageddon a few hours ago,” Mr Staples said.

“We feel that we’ve got a reprieve. Thankfully prayers were answered and the wind changed. Then we were able to get on top of it. Now we’re just very much in a state of readiness, I guess. We’re making sure that nothing flares up – or nothing comes from a different direction now that the wind’s changed.”

Eight fires were burning at emergency level by lunchtime, including the 226,000-hectare Currowan blaze, the 31,000-hectare Clyde Mountain fire near Batemans Bay, and the 26,000-hectare Green Valley fire east of Albury.

By 10am, the sky had turned black in the seaside town of Bermagui. Channel Seven journalist Nat Edwards, who was holidaying in the region, posted images of cars packing the foreshore and residents evacuated to the surf club.

“Never seen anything like this. We are in Bermagui on the south coast … the whole town is taking shelter at the beach,’’ she said.

At times, exhausted fires begged for reinforcements but none were available as the fires raged down the entire NSW south coast from Bega in the south and beyond to Nowra in the north.

“There are no bloody trucks so we are buggered,’’ an exhausted volunteer broadcast over the RFS radio at 11 am.

By lunchtime, there were unconfirmed reports on RFS radio of up to 40 houses at risk in West Conjola and requests for reinforcements, as residents posted images of huge plumes of smoke in the town.

“Just save life only,” was the RFS radio reply.

“Standby and fight the fire with what you have. Stay safe and get out if you can,’’ another RFS volunteer was told later in the afternoon.