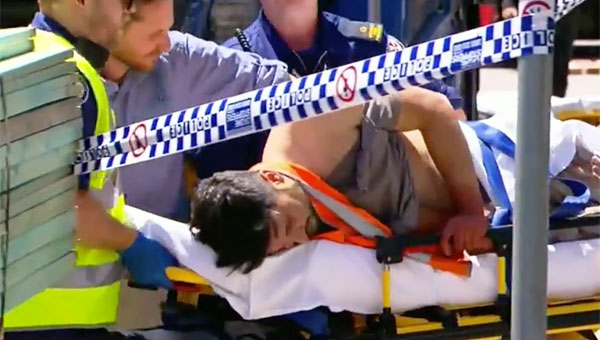 A property developer died and his son was wounded in the attack. Photo: Channel Nine

Police are hunting for a Russian national over the fatal stabbing of a property developer and the wounding of his son at a Sydney construction site.

Vladimir Kondakov is believed to have hitched a lift to Rockdale on Wednesday afternoon after 76-year-old property developer Albert Metledge was killed and his 33-year-old son, Antony, was wounded in the double stabbing at St Peters.

Kondakov was an employee of Mr Metledge “for some time” and there were no previous issues, Chief Inspector Michael Merrett told reporters on Thursday.

The 49-year-old is of no fixed abode but is understood to have connections to the Bankstown area.

“If you were seeing this, please make yourself known to a police station and turn yourself in,” Chief Inspector Merrett said in a direct appeal to Kondakov during a media conference.

The father and son were stabbed in a “violent and unprovoked” attack, he added.

Albert Metledge, who died at the scene, was described as an “accomplished and well-respected man” in a range of tributes posted on social media.

Antony Metledge was taken to Royal Prince Alfred Hospital where he underwent surgery and is listed as being in a stable condition.

Kondakov is described by police as caucasian, 180-centimetres tall with a shaved head. He was wearing a blue T-shirt and pants and work boots and speaks with a Russian accent.

Police have warned the public not to approach him.

A massive manhunt has been mobilised using significant resources including police helicopters, dog units and riot squad personnel in a bid to track Kondakov.

Albert Metledge’s nephew. Brian Metledge, said the family was shocked by what happened.

“The family is in shock and unable to talk or see anyone at the moment. We thank everyone but request privacy at this moment. Please let family and friends know,”