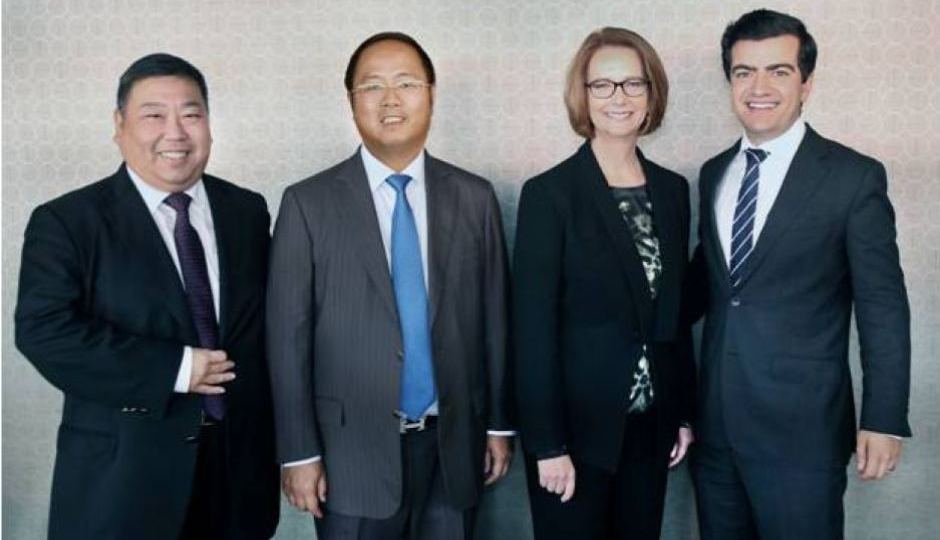 Exiled Chinese billionaire Huang Xiangmo dropped off $100,000 in cash to the NSW ALP headquarters in a plastic Aldi bag in April 2015 despite being a banned donor, an anti-corruption inquiry has heard on Monday.

The Labor Party took the cash and banked it, with an official claiming he believed Mr Huang was “in agriculture”, rather than a property investor, a group that is banned from offering political donations in NSW.

The Labor official took home the Aldi bag because it was safer than leaving it in the ALP office.

In sensational evidence on the opening day of a public hearing of the Independent Commission Against Corruption, it was also revealed one of the men accused of participating in the complex political donation scheme committed suicide after investigators knocked on his door for a compulsory interview.

The inquiry into whether the ALP has breached political donation laws was told that former NSW ALP secretary Jamie Clements was also seen with the Aldi bag filled with cash after meeting Mr Huang.

Mr Clements will give evidence later this week.

The inquiry was told Mr Huang appeared at Labor’s Sussex Street headquarters in April 2015, weeks after the Chinese Friends of Labor fundraising dinner in Sydney.

Labor’s former community relations director, Kenrick Cheah, told the inquiry Mr Clements had handed him an Aldi bag and told him to process the donation of $100,000 cash, supposedly from multiple donors at a fundraising dinner.

ICAC commissioner Peter Hall QC asked Mr Cheah why Mr Huang would arrive with the cash from other donors.

“If the cash came from multiple donors, can you explain to me why Huang Xiangmo – said to be an extremely wealthy individual – would be carrying cash in a shopping bag on behalf of donors? Can you explain that to me?” he asked.

“Why would a man of his stature be undertaking such a task of a delivery man?”

Mr Cheah answered that Mr Huang wanted to appear as “the big man” and gain respect with the Labor Party for bringing in such a large sum of money.

“It’s a concept of face. He feels like ‘I’m the big man, who can organise this for you’,” Mr Cheah said.

ICAC was also told current NSW ALP secretary Kaila Murnain later learned Mr Huang was the source of the $100,000 in her previous role as assistant secretary. She was told by a former MP Ernest Wong.

“Of course, Ms Murnain’s statement as to what Mr Wong is said to have told her is not, of itself, conclusive proof that there were one or more ‘straw donors’ or ‘pretend donors’ associated with the Chinese Friends of Labor function in 2015 or that there was a scheme to conceal the fact that Mr Huang was the true source of funds,” ICAC counsel assisting, Scott Robertson, told the inquiry.

In news that shocked the hearing, Mr Robertson said another Sydney man involved in the scheme, Leo Liau, had taken his life after he was contacted by investigators and left a suicide note detailing his involvement.

“Tragically, Mr Liao is understood to have taken his own life on the weekend prior to that scheduled appearance,” Mr Robertson said.

Mr Liao left suicide notes to his wife detailing his terror at being interviewed by ICAC investigators.

“They told me not to discuss it with any family member. In reality I have also chosen not to tell you either, to prevent you having to worry about [it],” the note said.

“I have decided to leave this world, which is also my last hardest attempt to prevent you and our daughter from becoming family members of a criminal.

“This is because I am still innocent at the time I wrote this letter.”

Mr Robertson told the inquiry the hearings would examine if a series of $5000 donations at a Chinese Friends of Labor dinner attended by Bill Shorten in 2015 were a “front” for donations for Mr Huang.

There is no suggestion Mr Shorten or former NSW Labor leader Luke Foley, who also attended the dinner, had any knowledge of what unfolded in relation to the donations.

Property developers are prohibited from donating under NSW law.

Accepting a donation from a banned donor can result in a jail sentence.

But NSW Labor did not declare Mr Huang was the source of the cash, instead claiming it was from Emperor’s Garden restaurants’ Jonathan Yee, his staff and family.

The inquiry heard it was highly unlikely restaurant staff had the cash to donate $5000.

“The associations, along with the implausibility that restaurant workers would have the financial capacity to make lump sum donations of $5000 or $10,000, as well as other factors, led the Electoral Commission to suspect that the $100,000 in cash was donated on behalf of a person or persons other than those who appeared in NSW Labor and Country Labor’s disclosures,” Mr Robertson said.

Mr Huang is effectively banned from re-entering Australia after the Morrison government rejected his bid for citizenship and revoked his permanent residency.

He lives in Hong Kong, where his close connections with the Chinese Communist Party have prompted concerns from Australia’s intelligence agency, ASIO.

Mr Huang’s entanglements with another former NSW ALP secretary, Sam Dastyari, led the then senator to quit politics after it was revealed he might have tipped off the Chinese donor to the possibility he was under ASIO surveillance.

Mr Dastyari has also been called to give evidence and took to social media on Monday to say he was looking forward to providing the facts of the matter.