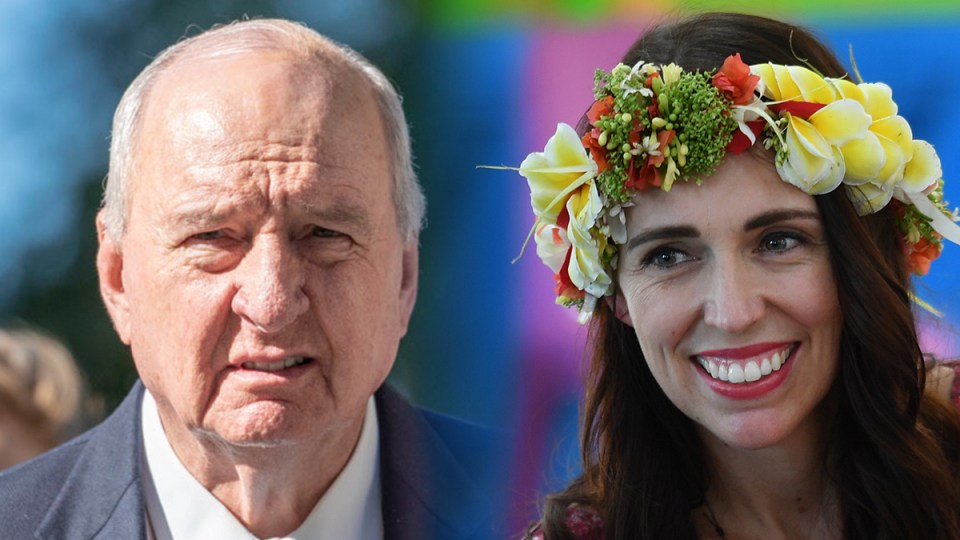 Jones told his listeners on Thursday that if Prime Minister Scott Morrison bumped into Ms Ardern, he should “shove a sock down her throat”.

Despite, Mr Morrison condemning the comments Jones continued his attack on Friday morning, describing the New Zealand leader as “gormless” and a “hypocrite”.

ME Bank later confirmed on Twitter it had pulled advertising from 2GB radio in response.

“It [the comments] absolutely does not align with our ME values on many levels,” a spokeswoman said.

Ms Ardern, meanwhile, was not buying into the controversy – telling reporters at a meeting of leaders in the Pacific that she didn’t want to give Mr Jones’ comments “the light of day”.

During his Friday show, Jones attempted to justify his actions by reading out messages of support from listeners.

He claimed he had even received a message from a “prominent” female political figure who he said wrote: “Don’t worry, I haven’t met a man more supportive of women”.

Jones repeated that Ms Ardern was hypocritical for her comments about carbon and greenhouse gas emissions, before going on to suggest the climate change being faced by Pacific Islanders was a “hoax”.

“Even if you accepted that, and you accept that carbon dioxide creates the problem, whatever Australia does or doesn’t do at home will make no difference whatsoever to their plight,” he said.

Speaking after a marathon meeting of Pacific countries in Tuvalu, Mr Morrison on Thursday night said Jones’ comments were “way out of line”.

“The comment has been relayed to me; on what’s been reported to me, I find that very disappointing,” he said.

“I have two daughters, so you can expect that’s how I would feel personally about it. I’ll leave others to explain what they’ve said and how they’ve said it.”

Jones earlier accused critics of “wilful misinterpretation”, revealing he never meant Ms Ardern any harm when he suggested Mr Morrison “shove a sock down her throat”.

Jones stirred up a hornet’s nest on Thursday morning with a breakfast editorial on climate change when he described Ms Ardern as “a joke, a fool and a lightweight”.

Social media users have since been calling on 2GB owner, Channel Nine, to sack Jones, while activist group Sleeping Giants posted a purported list of 2GB’s advertisers and encouraged people to raise their protest with them.

Let his advertisers know how you feel

Jones told The New Daily on Thursday that what he meant to say was that Ms Ardern should put her own sock in her own mouth, not have Scott Morrison shove one down it.

“I note some concern about my comment this morning re New Zealand PM Jacinda Ardern and her remarks and preaching about climate change,” Jones said.

“Of course what I meant to say was that Scott Morrison should tell Ms Ardern to ‘put a sock in it’.”

“There are many people who would relish the opportunity to misinterpret things that I have said as we have seen online this afternoon. Of course I would not wish any harm to Jacinda Ardern,” Jones said.

“This wilful misinterpretation distracts from my point that she was wrong about climate change and wrong about Australia’s contribution to carbon dioxide levels.”

“Easy to tell someone to shove a sock down a throat when you’re sitting in the comfort of a studio,” Mr Bainimarama said.

“The people of the Pacific, forced to abandon their homes due to climate change, don’t have that luxury. Try saying it to a Tuvaluan child pleading for help.”

Jones has previously sparked controversy when he suggested then prime minister Julia Gillard should be “put into a chaff bag and thrown into the sea’’.

He was later covertly recorded at a Young Liberal function suggesting that Ms Gillard’s father, John, who had recently passed away, had ‘‘died of shame’’ over his daughter’s ‘‘lies”.

#qanda this is the list of auction items from the dinner with Alan Jones. Note the chaff bag pic.twitter.com/f9BodGpU

Mr Morrison is attending the Pacific Island Forum in Tuvalu with Ms Ardern and other Pacific leaders.