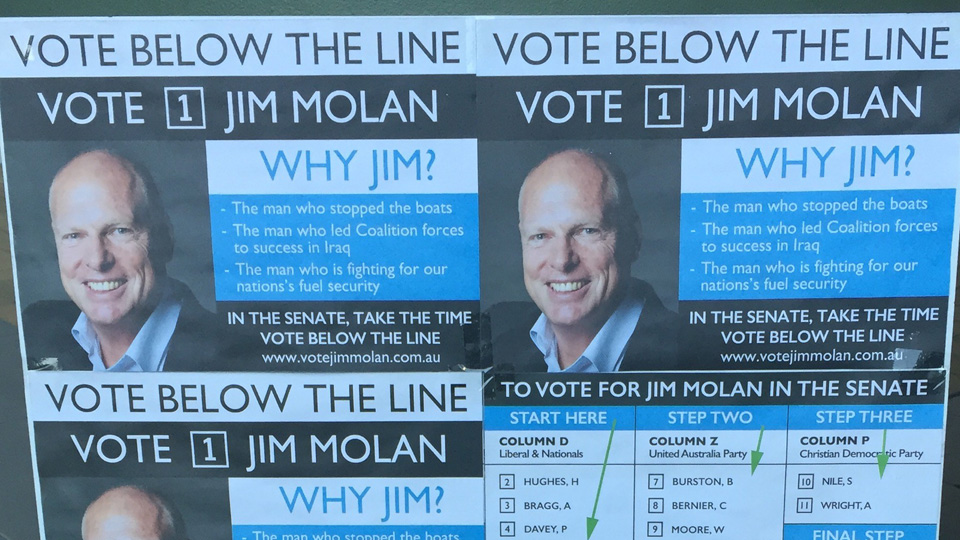 Liberal MP John Alexander has been caught on tape urging voters to ignore the Coalition ticket as part of a guerrilla campaign to save a Liberal senator.

The National Party is “ballistic” over the actions of Liberals across NSW to save the career of NSW Liberal Senator Jim Molan, who was relegated to an unwinnable fourth spot on the Coalition ticket.

Prime Minister Scott Morrison is again being urged to intervene, amid predictions Senator Molan’s “rogue” campaign could jeopardise the election of the Nationals candidate in the third spot with a breach of the binding Coalition agreement.

The New Daily has obtained audio of Mr Alexander – the Member for Bennelong – at a pre-poll booth openly urging a voter to support Senator Molan, in a clear contravention of the Coalition’s offical Senate ticket.

In the recording, Mr Alexander is introduced to a woman who claims to be a “new voter” in the area asking how she should vote in the Senate.

“That’s how you should vote for the Senate. Unless you want to vote for Jim Molan, which you may well,” Mr Alexander says.

The female volunteers explain in detail how to vote for Senator Molan below the line – in contravention of the Coalition ticket – telling a voter “You’ve got it” at the end of the instruction.

It is understood the NSW Liberal Party also has photographic surveillance of a former state MP handing out Senator Molan’s rogue ‘how to vote cards’ instead of the Liberal Party ticket.

A senior Liberal warned there “will be consequences” after the election.

At the Darley Street pre-poll booth at Manly, NSW, former Liberal MP Bruce Baird was also seen berating a volunteer in a Tony Abbott T-shirt for openly handing out two how-to-vote brochures – one for Tony Abbott and the Liberal senate ticket and one for Jim Molan’s vote-below-the-line senate campaign.

“You can’t be doing this. Our party has voted on this,” Mr Baird was overheard saying.

One witness claims that when a Liberal volunteer responded “I don’t think this is the time to discuss this,” Mr Baird responded: “This is exactly the time.”

Independent candidate Zali Steggall said that Liberals were urging voters to ignore the Coalition ticket to save Senator Molan at “every pre-poll in Warringah”.

“They are destabilising their very own party,” Ms Steggall told The New Daily.

Senator Molan was dumped to fourth on the Coalition ticket, behind Liberals Hollie Hughes and Andrew Bragg and the National Party’s Perin Davey.

But instead of accepting the outcome, he is openly campaigning for below-the-line votes to ensure he survives in a move that has angered the Nationals.

Ms Davey has accused Senator Molan of breaking the coalition agreement to keep his job.

“It is an absolute risk for the Nationals in what Jim Molan is doing,” Ms Davey said.